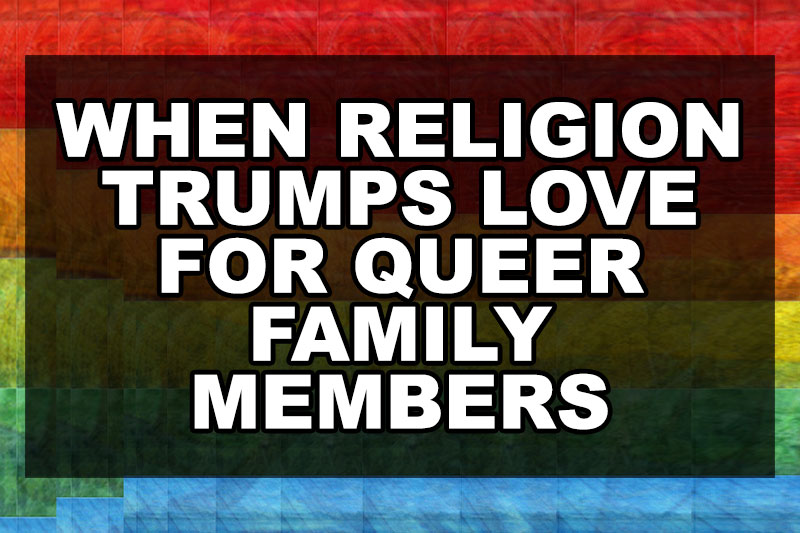 [amazon_link asins=’1456531034′ template=’ProductAdRight’ store=’ourqueerstories-20′ marketplace=’US’ link_id=’c94e21bf-e79a-11e7-80d7-d96519e40185′]I know that for quite a lot of us, this tweet really hits close to home. Sad to say! In both instances, it seems our families have this unwholesome need to “save face” and protect the family name from being tarnished should word reach outsiders that “immorality” resides in the family. Again, if we look closely at the reasons behind such doings we will see that the common denominator is religion. In the former case, the family usually believes they cannot condone homosexuality as it is a sin. If your family happens to have a theologian, one can only brace themselves for endless, taxing and unsolicited lectures on this, with references being made to all the Biblical passages pointing out the ungodliness of one’s sexuality. In the latter case, the family may want to protect its image as the disciplined and morally upright family that it often wants to be seen as. Religion does continue to trump love.

In doing so, our families are choosing their reputation and religious beliefs over accepting and loving queer family members. In doing so, our families are willing to forego being there for loved ones who have been abused by other family members. Our families would rather sweep this reality under the carpet, thus failing to seek justice for the victim because focusing on this uncomfortable truth of having a sexual predator in the family or seeking justice is seen to have the potential of straining familial relationships. If the sexual offenders happen to be the breadwinners, the family may also not want to ‘kill the goose that lays the golden eggs’. Undeserved burden is placed on the victim to keep the abuse a family secret and to try, by all means, to act as if the abuse never happened. If forgiving is what it takes, the victim is guilt-tripped into doing this.

Trust me, I’d know all about this.

It was during a sex education session in high school when our teacher told us that if one had been sexually abused and did not report this, then it meant they enjoyed it. That wasn’t true and it was unsettling to hear this (coming from a WOMAN, a TEACHER) and so I felt compelled to open up after years of bottling the abuse inside of me where it slowly ate away at my self-confidence and ability to relate to the world. I couldn’t bring myself to tell my mother about this so a teacher had to do this for me. Even after being told about the abuse, my mother never said anything about this. When a nurse we had been referred to, suggested we open a case against the perpetrators, my mother (on our way home) asked if that was what I wanted and if I would be able stand in court with ‘those people’. ‘Those people’ were her children and she couldn’t bring herself to say that. Fear gripped me as I pictured myself in court. The suggestion of the nurse was dropped at that instant.

I’m sure it must have been hard for my mother (now a single parent) to have to accept this reality. I only wish she would have been more supportive. I wish she would have said something. She could have told me she was sorry that I had gone through such a traumatic experience and she had missed all the signs that something was amiss. Her silence was deafening. Her silence made me feel like she took sides. And eventually other family members found out about this during an altercation in which my brother then proceeded to physically assault me. Still, I never received the support I would have loved to receive. It was almost as if nobody truly believed it, nobody wanted to believe it, nobody wanted to even deal with this reality. Surely, our families do not have a full appreciation of how child abuse scars a child and can mar the way they function in the world as an adult. Sweeping such abuse under the carpet only hurts the child even more.

Fast forward to my early twenties and I (after battling with the feelings) came to terms with my sexuality. Some heterosexual folks have asked me if I date women because I was hurt by men. There is this misconception in our cis-heteronormative society that if one dates folks of the same gender, then they must have been hurt by men. Yes, SOME women may date other women because they have been abused by men and thus find it hard to connect with any of them (on an emotional or romantic level). And that is OK. As for me, I do not date women because of the abuse I endured at the hands of men. As a matter of fact, I have no logical or biological explanation for my attraction towards women. It just happened and I eventually accepted it as a healthy part of who I am. I find the whole process of having to provide causal explanations for one’s sexuality to be really overwhelming. I am not sure if cis-heterosexual folks want explanations so they can gauge whose queerness to ‘tolerate’. I am sure that queer folks, sometimes, provide such explanations for our sexualities or gender identities because maybe, just maybe, after all has been said and done, society can acknowledge, accept and respect our existence. One can only long for the day when all are free to BE, free to love whomever they love, free to explore their sexualities.

Since telling my family about my sexuality I have had to deal with unsolicited sermons on how I am sinning and am doomed to an afterlife of suffering in the pits of hell. I have been told to find a pastor who will “pray the gay away” and to stay away from gays. I am told I am going through the challenges I am facing because of my sexuality. Yes, apparently the gods are punishing me (in this life) for being queer and they will take another jab at me in the next life. Just recently, my mother’s sister decided to surprise me with a video of woman who, apparently, is a former lesbian who may have found Jesus and well…you know how it all ends when “a sinner” finds Jesus.
‘There is no gay person who is truly happy’- so my overwhelmingly religious brother thinks. The same brother who also told me to pray for forgiveness when I attempted to kill myself at the age of 15. The same brother who once called me to his room and asked me to take my pants off before he had seconds about what he had planned to do with my semi-naked body. Perhaps, he got a nudge from the Holy Spirit. Anyway, back to the quote. Given the amount of queerphobia that LGBT+ folks continue to endure to varying degrees, it is no surprise that (some) LGBT+ folks would find it hard to be (genuinely) happy. It is not that being gay means one will not be happy. It simply means the challenges one faces on the grounds of their sexuality or gender can make it hard for one to experience happiness. And that state of despondency can lead some to seek some sort of comfort in activities that may pose a huge health risk for them.
It angers me more than it makes me sad that the same people who strained my ability to have a healthy relationship with self and others (mainly men), the same people who abused me, the same people who have never even found it in themselves to apologise to me for being horrible men to me but still expected me to respect them, the same people who failed to support me when my childhood was being turned into a battlefield now have the guts to talk down to me from their high horses about my sexuality. It is hypocritical that people remember to apply Bible standards because it is easier to refer to it when pointing out ‘the flaws’ of other people. Glass houses, folks. Glass houses!

What can I say though? Will I shrink myself so I can be accepted by people whose love I have never felt? Will I crawl back into the closet just to appease people who do not have any concern for my well-being? Will I flinch at the use of the Bible against me by people who seem to forget that that same book says not to judge and to remove the log in one’s eye first before attempting to remove a mere speck in another’s eye? Uhm…I don’t think so!