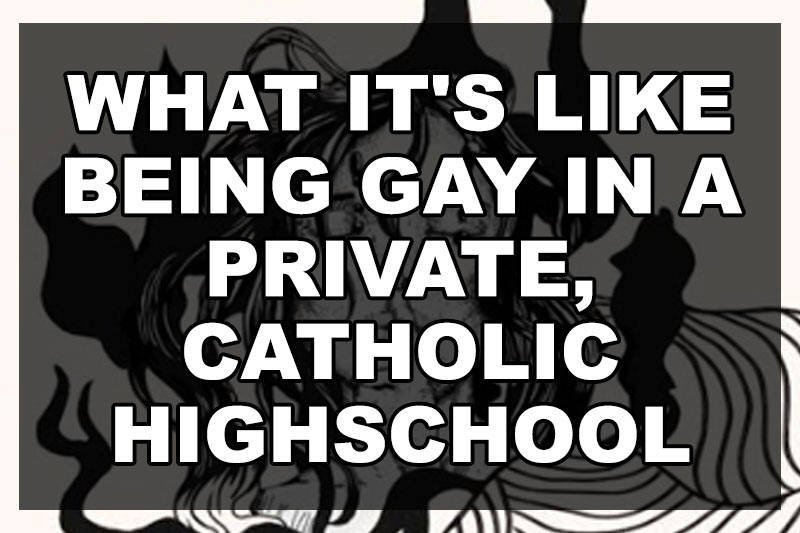 Editor’s Note: The following submission is from Grace Smith. Have an LGBTQ+ related experience or story to share? Having your article published on this site will automatically enrol you into a raffle to win a $50 Amazon Gift Card. Submit an article today via queerdeermedia.com.

I am a gay, cis woman. I have attended private, Catholic schools my entire student career. I know how lucky I am to have this opportunity- but as member of the LGBT community, sometimes I don’t feel so lucky. While having the funds to attend this schools and the privileges to be accepted, I am not truly accepted by the students, faculty, and staff because of how I love.

I’ve known that I’ve liked girls since middle school. We wore these checkered blue and black skirts, and I couldn’t help myself but to marvel at the girls legs and thighs. I knew I was different. I knew that when I first danced with a boy at a middle school dance, I didn’t feel the supposed ‘spark’. But when I danced with one of my female friends, I felt lightning between my thighs. And again, when I kissed my first boy- I felt nothing but anxiety. Although, when I first kissed a girl, it felt right. All my romantic relationships with men having been anything positive, not to hate on men- but they just aren’t for me!

Although California is quite an accepting and radical state, it seems that private schools with a religious message ingrained in their teachings, have still not adopted these more contemporary lines of thinking. I attend religion class (and have been for 8 years) almost every school day. The curriculum is focused on teachings of the Catholic Church and the Bible. These teachings, unfortunately, don’t necessarily welcome the LGBTQ+ community. Whenever the idea of families or marriage is brought up, I feel ashamed that my family won’t look like what the Church wants. It won’t look like my friends families. It won’t look like my own family.

I have been closeted to many of my close friends and family members for as long as I can remember. Mostly because of the fact that their religion dictates their views on life. Many of my friends won’t accept that I like women. That I want to marry a woman one day. That I want to have children with a woman. That I have a girlfriend and have had girlfriends.

The subject of relationships is a difficult one for me. While highschool is a time of showing off your latest relationship, seeing boys and girls holding hands and kissing in the hallways- it’s never going to be my highschool experience. It hasn’t been. I’ve been in relationships with other closeted students at my high school who have the same fears as I do- being found out. This is a fear merely because of the fact that we know we will not be accepted, but not only that, we would be frowned upon.

It’s difficult for me to live through my highschool career with a looming pressure to be in a relationship, have someone to go to prom with, have someone who gives you a giant teddy bear on Valentine’s Day when, for me, that relationship would be with a woman. I am constantly surrounded with people believing that to be normal, to be pure, is to be straight.

One incident stands out clearly in my mind. My girlfriend is part of a water polo team at school, and one of the teammates and my friend commented on how it’s like she and I were dating. I was instantly filled with fear and my face grew warm and red. My fear turned into an anger and defensiveness. I started explaining how funny that would be and reassuring that I was straight. I kept repeating, “I am straight, I love guys!” While I may love guys, it’s never been a romantic love for me. Being gay shouldn’t be something you’re called out and and feel you have to defend the facade of being straight. I shouldn’t have to live in fear that one day someone may find out I am gay. While it’s never something that one should be ashamed of, I am constantly surrounded by people who do find it shameful- even if they won’t admit it.

The one thing that makes the situation easier to digest is having a partner who is in the same shoes as I am. We both have a fear and anxiety that someone will find out. While, some may say, it would be easier to be out of the closet- it would also bring on judgement and hate that I am not ready to accept. I am not willing to accept.

I am blessed to be in a state where being gay is something that we see everyday, but I still am part of an isolated community who still believes that being gay is sinful. In each class we are taught that we are “made in the image and likeness of God.” And while there’s only a handful of passages in the Bible that mention homosexuality in a dark light, it’s still believed that the acting on of these homosexual tendencies is a sin.

I have constantly questioned my faith because it questions me. I have strong opinions that directly go against my faith, one being how I view love and who I love. So it leaves me questioning my friendships, teachers, and my school if they would truly accept me for me. It’s preached unity and inclusivity are of the utmost importance, but does that also include someone like me?