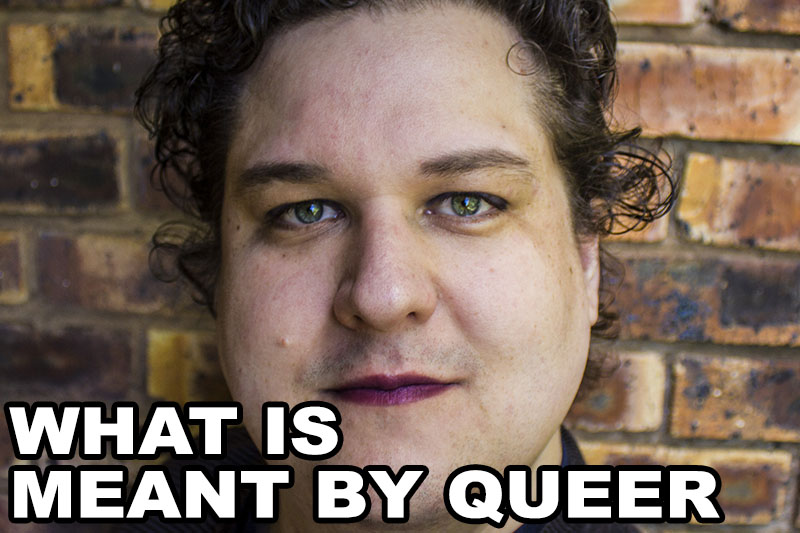 Editor’s Note: The following submission is from Charl Landsberg. Have an LGBTQ+ related experience or story to share? Having your article published on this site will automatically enrol you into a raffle to win a $50 Amazon Gift Card. Submit an article today via queerdeermedia.com.

[amazon_link asins=’B072JQ23B2′ template=’ProductAdRight’ store=’ourqueerstories-20′ marketplace=’US’ link_id=’536339eb-8caa-11e7-ac4d-a10998d57abb’]Defining queerness is never easy. So I say that this is what queerness means to me and I understand that there are many folk I might consider queer who wouldn’t adopt the label for themselves, and this is important and valid for a plethora of reasons. However, for me queerness is the politicisation of gender and sexuality inasmuch as the individual does not conform to cisheteronormative models of gender and sexuality.

Okay, that is a huge mouthful, so let’s unpack that. Why do I say politicisation? (And I’m not going to get too heavily into terminology here, people will disagree with semantics.) But, queerness is political. The fact that queer people have been systemically demonised in society as a matter of rich white cishet men gaining and reinforcing power, means that simply to be queer means to be political. Usually younger white cis gay men don’t often get this at the best of times. so you hear the apophthegm of, “but why do you have to be so political?”; this coming from a man in a rainbow top who either doesn’t know or appreciate the history of why the fact he is mostly safe walking through his local mall. And yet I, as a trans person, can’t use the bathroom of my choice without putting myself at serious risk. To be queer, to exist defiantly against the on-going system of oppression is in and of itself a political action, whether or not you are an active participant in that. For queer people to get married, to adopt children, to have jobs and housing, to have access to good medical care, to walk safely through a shopping centre like a detonated unicorn (of which I utterly approve) are all political in that these things have been used against us in order to dehumanise us, erase us, and kill us.

Secondly we need to deal with why gender and sexuality are lumped into all of this together. I mean, they’re not the same thing, surely? And this is where patriarchy has had a bigger hand in pushing the issues together than perhaps the very individuals who are marginalised along those lines. I could write endless pages on normative models of gender and sexuality, but it boils down to what a *real* Man™ and a *real* Woman™ are and do and say and… and… and…

Lesbian people, gay people, bi- pan- ambi- omnisexual people, transgender, nonbinary, genderqueer people, intersex people, asexual people, and many, many more have all threatened the *real* Man™ and a *real* Woman™ model of gender and sexuality. If men aren’t *real* Men™ by having and XY chromosome, and having a penis, and using that penis by putting it in a *real* Woman™ who has XX chromosomes, and has a vagina, then how can we possibly know which way is up or what is right and wrong and true and pretty and squishy.

Well, the truth is that this cisheteronormative model has never been true for humanity. Chromosomes are not that simple, they don’t automatically translate to genitalia, and genitalia don’t automatically translate to gender, and a plurality of gender and sexuality has always been with humans since we became sapient. Perhaps one of the greatest duties of queer people is to remind all of humanity that we are plural and manifold creatures beyond binaries and cishet patriarchal structures and how beautiful that is, but that is another discussion.

But this is what is meant by queer: the fact that those of us who are different, who do not fit binary models, cisgender models, heterosexual models, have had the label of queerness forced on us to other us, to make us the other. Even though we are naturally occurring parts of the human race, we were pushed out, shunned, killed. We were made to be monsters so cishet models could act as vindicating bed time stories so cishet people could feel better about themselves. Queer is not our label originally. It’s actually a slur. So much so that many queer people hate the term and would rather we didn’t use it – and that is understandable. But many of us reclaimed the word. It was bullets in the mouths of cishet people, but it’s healing in our mouths. It was a curse we turned into song. Well… to me at least. Queerness is how we fix the human race. Not in making cishet people queer (I can already hear the queerphobic strawmen arguments coming at this notion), but instead in insisting that we as queer people deserve a place at the table as much as anyone else. Queerness means that we deserve rights and access to medicine and housing and jobs as much as any other human being regardless of where we piss or what our sartorial choices are or what pronouns we use and whether those things are accepted by the always capricious fashions in taste of cishet people. Queer doesn’t mean different, it means having been made different. It means having been unjustly exiled and demanding justice. It means having been dehumanised and insisting commonality. It means having been erased and demanding recognition. It means being true to ourselves when we are told that we are hate-worthy on a daily basis.

And at the end of the day queer is beautiful, queer is powerful, and queer will save the world. If you are queer, shine bright in your own way, stay safe, stay proud. You’d be surprised how powerful the smallest actions can be in whatever situation you find yourself in. Forgive the nerd in me:

“Saruman believes it is only great power that can hold evil in check. But that is not what I have found. I have found that is the small everyday deeds of ordinary folk that keep the darkness at bay. Small acts of kindness and love.” ~Gandalf in Peter Jackson’s The Hobbit: And Unexpected Journey.