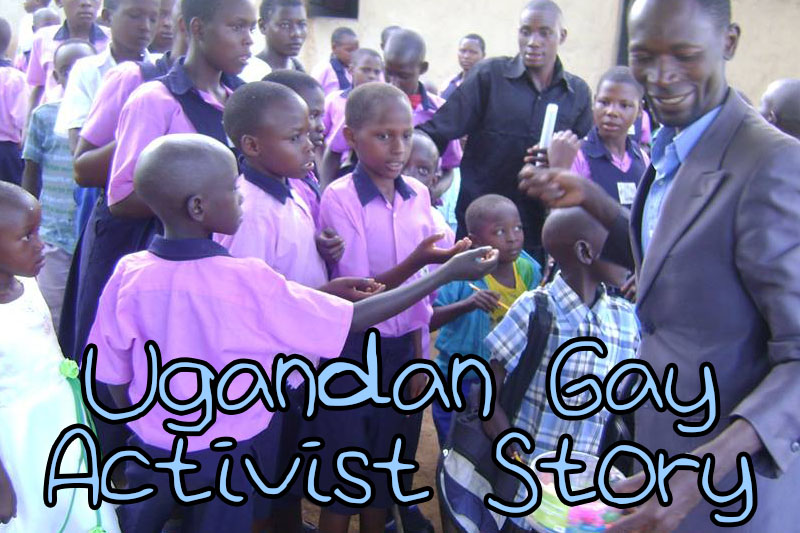 Editor’s Note: The following submission is from Patrick Leuben Mukajanga. Have an LGBTQ+ related experience or story to share? Having your article published on this site will automatically enrol you into a raffle to win a $50 Amazon Gift Card. Submit an article today via queerdeermedia.com.

[amazon_link asins=’B072R3T1SR’ template=’ProductAdRight’ store=’ourqueerstories-20′ marketplace=’US’ link_id=’df4c4612-8cb0-11e7-bca9-7b5409aaf67f’]I grew up in a village setting in Kiruhura district with my family. My family had a very concrete religious foundation that never tolerated anything against the normal African family setting. My mum (the late Naomi) was a very loving and caring mum who taught us a lot of things as we were growing up. I grew up with a feeling for fellow boys which was contrary to what they expected since all other boys used to play with girls but me I would instead enjoy to be around boys most of the times. This personality/character inside of me grew along with as I developed into a mature man which has failed to go off despite the hate and troubling life I pass through among my friends and family since I later came out to be gay.

My house was a very religious one with a good foundation of Christianity in our neighborhood with loving parents and having a friendly neighboring environment.

My friends were fellow boys and they are the ones I enjoyed playing with up to now when I grew up. I have never enjoyed the company of girls though I respect most of them as my sisters. I enjoyed having fun with men.

I was bright during my school years and I used to be in the Christian union since I liked serving God bearing the fact that my family and I grew up was so religious. I am a teacher by profession with a certificate in education. I can all say education did not deny me much though I couldn’t make it up to the university level after branching off to do a certificate in education. Since my passion as a child, I wanted to teach children who didn’t have enough parental support or the needy children and I thank God who has fulfilled my dream since now I fundraise and take care of my orphans in my district with a school. Through my online pool of friends across the world I am able to fundraise and get material support to fund and accelerate their education.

I can describe myself as a gay man who likes fellow men. I am a compassionate person who likes helping the needy children and the elderly. I like dressing like a queer with skinny jeans and designer t-shirts but sometimes I like to be professional as a gentleman. My favorite music is gospel music and I like to hang out on beaches. My favorite stars are Arnold Schwarzenegger, Sylvester Stallone as John Rambo, Jean Claude Van dame and Bruce Willis and lastly my best authors are Chinua Achebe, Wole Soyinka, Ngugi Wathiongo, Charles Dickens who wrote Oliver Twist and Joyce Meyer.

I first came out in 2004, I received harsh and rude reactions from people which have led me to losing most of my straight friends and some family members plus hate from many people in my area.

I was so terrified when I first heard of the antigay bill because of knowing that any time I will be beheaded since the death penalty scared our Ugandan LGBTI movement and that pushed many members back to the closet though some of us were resilient to lobby with international allies to make this measure is withdrawn from parliament. I didn’t protest but wrote many petitions to our Ugandan and other international leaders. I believed the death penalty was a serious issue which needed to be fought with a very strong force as it was encroaching on the rights of Ugandan LGBTI people.

As a teacher, I run an orphanage school in Kamwenge district. I am a church minister with affirming Pentecostal churches and I am a passionate LGBTI activist. I like taking care of the needy children or the orphans since it was my dream as a child and I thank God who made my dream come true. I love my job and I thank my international allies in Europe and USA who help me in fundraising and providing scholastic materials as well as school fees for these children.

I trust my sister and a few friends. Above all, I used to trust more my mum but she died last year. She will forever remain the greatest mum and may God rest her soul in eternal peace.

Yes I chose to partake in this strategy to tell people about my life knowing that the reactions would be cruel knowing that Uganda is so homophobic.
Ever since I came out of the closet, I developed much love to serve fellow community members with all my passion, I decided to dedicate my life to activism which has exposed me to many great friends both locally and globally. I was not forced to come out, I was willing to come out but I was still waiting for that right time. After coming out some of my gay friends and I came up together since we had much love in serving God and to offer spiritual rehabilitation to the stigmatized LGBTI members with our vision to form St. Paul’s Voice Centre (SPAVOC).

On a local level, the press or the media in Uganda is biased towards issues and all of the outing especially after signing of the law that were meant to instigate violent attacks on LGBTI individuals. This leaves the community members to live in fear since most of our faces, names and other details were published in the “Hello” and “Red Pepper” tabloids leading to many evictions and families disowning many of LGBT individuals. The majority of the Ugandan media to a greater extent is homophobic with a very small number of sympathizers in the media fraternity.

No I don’t have a partner but I have a couple of friends I have protected since the bill was signed. I have helped many to relocate to safe places, get them food, counsel them at church and even helped some to move to European countries like Netherlands for asylum and for their safety.

Since the bill was passed mine and the life of some of my close friends have always lived in fear due to the harsh environment. We fear being arrested and attacked by the homophobic public members that could lead to murdering individuals because of the hatred of having non-heterosexual orientation. More so the situation has changed a lot and many friends have gone back to the closet due to the rampant media outings which caused problems for many of my fellow members and making them feel like criminals and prisoners in their own homes.

Things have changed a lot in relation to my activism since February, there are no safe places to conduct meetings and socialize, no more workshops for learning and education, and there are some diplomatic missions with individuals who are distancing themselves from us by denying some members visas fearing they won’t return back. All I can say life for post February has been very demoralizing for me and my fellow members of the LGBT.

As a person, I dream about one day living in a country with total respect, dignity, liberty, equality and freedom to all its citizens despite their religious, cultural and sexual orientation differences that is built on tolerance for those to express their individuality. I would like to have re-united strong LGBTI movement before the passage of the Anti-Homosexuality Bill in February of 2014.

I dream of having equality, justice, and freedom for a liberated Uganda by embracing rights of all citizens and not discriminating LGBT individuals that is my vision for the future of Uganda.

I dream to have a peaceful, stable, united and strong LGBTI movement in Uganda thus meaning I wish to see LGBTI people happy and free enjoying their country like other citizens.

My happiest memory is when I won Makwan award and when I was confirmed as reverend under APCI.

My biggest fear is being arrested, sentenced to prison for life or being killed as I have so much to offer in educating individuals regarding LGBT movement that we are not criminals nor do we “recruit” children to become gay. We are people who wish to live in peace and have the freedom and dignity to be ourselves without being harassed, arrested without cause, and shunned from the public.

I would send my message to Pope Francis and Queen of England by making a call to them in advising Uganda to repeal the Anti-Homosexuality Act.