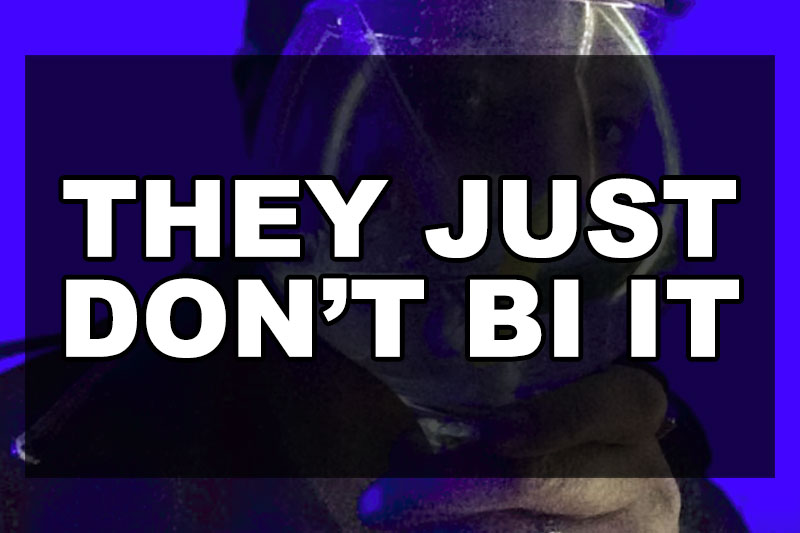 Editor’s Note: The following submission is from Joy Muhammad. Have an LGBTQ+ related experience or story to share? Having your article published on this site will automatically enrol you into a raffle to win a $50 Amazon Gift Card. Submit an article today via queerdeermedia.com.

Often I’ve been told that life must be easy for me as a bisexual woman. That I’m too privileged to have any complaints. That I’m too busy sitting on a high unicorn on a parapet made of the sufferings of my rainbow kin because I am attracted to people of the different gender.

Apparently my lot have no troubles at all to keep us down.

So when I grew up as a teen losing friends when they found out I was attracted to another woman, that’s just growing pains. When I lived with my ex girlfriend in a country where I could be sent to religious counselling if I came out, that’s nothing. Neither is refraining from holding my ex girlfriends hand when I board the bus leading to a suburb who would sneer and photograph us. I don’t even need a girl to get that. Unlike a Googled bisexual woman, I prefer not to go out dressed in fishnets, twelve inch heels and underwear made of cheese strings. Actually with my short hair and cargo pants, I get religious lectures and spat at in the street. But never mind, as a bisexual I have no right to complain. Why not wear a skirt and dress more feminine where I can be invited to threesomes I’m not interested in and be accused of trying to drag everyone, including the toilet gimp to a happy orgy that I’ve never been to. Of course I should be flattered when everyone else around me keeps their distance because apparently the whole world is supposed to be the object of my desire. Yes, please do assume us bisexuals have no sense of taste.

As a bisexual married to someone of a different gender (I have a husband) my life has no problems at all. Apparently we’re at the pinnacle of privilege. I don’t mind at all when people question why I as an Asian woman have chosen a white guy to spend her life with. It doesn’t matter if I have my own passport, apparently I’m after my husband’s passport as well. Because one is never enough for my kind.

Yes apparently being bisexual dissipates all other social ignorances too. We have no right to complain. Never mind the high statistics on mental health issues. It has nothing to do with social isolation or being led to believe that you don’t have the right to exist or ignorant bastards thinking they have leeway to give someone else abuse based on their sexuality. Nope. Sexism and racism just magically disappear all because I can blend in absolutely everywhere – just ask my lads at the Garrick Club, I even have premium membership there, didn’t you know?
Bi phobia, pfft, what’s that a fear of shopping?

Had I not met my spouse, my love life would apparently consist of cheating on every single person I was with, with an imaginary lover of a different gender to the person I’m dating just to ‘keep the balance.’ Because my sexual orientation revolves around a floating pair of weighing scales. I even have my own lab to measure sexual fluids to the last gram to keep me in the centre of the Kinsey Scale. Additionally as a bisexual woman, I would constantly be ‘up for it’ with my vagina outsizing all the TARDISes of Gallifrey. This is based on the factual statistics, complete with video evidence on your local porn channels and not all of them can be wrong, surely. I would be a lost soul all because I couldn’t ‘make my mind’ up on whether I fancied the same gender or other. Because it’s not the same as marrying a blonde even though you also find brunettes attractive. Because ice cream is off limits once you eat cake. I’m greedy – I can afford to talk about food. I absolutely love it when the rest of the world defines my sex life for me – not humiliating at all.

It’s lovely to know that my fellow lesbians have made their mind up about me. Just ask my first love who kept me in the closet because she was biphobic. Apparently one (and just one) bad experience with a dickhead from my community is enough to vouch for all bisexuals. I won’t say nothing about lesbians and bar fights, moving in on the second date, hand me down girlfriends and sadistic exes (and nope I won’t go into how I’ve all witnessed them first hand with different lesbian exes either).
Neither will I mention how gay men treat their bisexual fellas because apparently bisexuality doesn’t exist therefore neither should bisexual men. How very motivating, shall we tell that to someone with a low sense of self esteem? Not harmful at all.

It’s nice to know that us bisexuals are not to be trusted. On the flip side it does deprive me of company with a superb sense of judgement on bisexuals. And please do define bisexuality as being catered specifically for binary genders. Was it the pink and blue on our flag? You do know that purple stands for royalty don’t you? We’ll give the Windsors a run for their money. Bisexuality means attraction to more than one gender but don’t let a bisexual tell you what it means – apparently we’re too confused to even understand our own identity. Whatever next, vegan friendly bisexual gatherings with trans/non binary focussed workshops and income based entrance fees? Tsk tsk tsk, those bisexuals only thinking of willies and boobies as usual.

And I just love how gay bars can be so accommodating from time to time. Don’t bother acknowledging us, dearest MCs when you do a shoutout to all your gays, lesbians and straights. It’s not as if a bisexual person may wander into the crowd is it now?

We are in absolute awe each time a celebrity comes out as bi and love our historic icons too. We love it even more when monosexual communities welcome them with open arms as far as to overshadow their bisexuality with the words ‘gay’ or ‘straight’ instead. No wonder bisexuals have been questioned in what we can bring to the table when we’ve had it dismantled faster than an IKEA project with stolen-sorry – ‘replaced’ parts.

I wonder if the B in LGBTQI stands for Bisexual or Be Quiet?