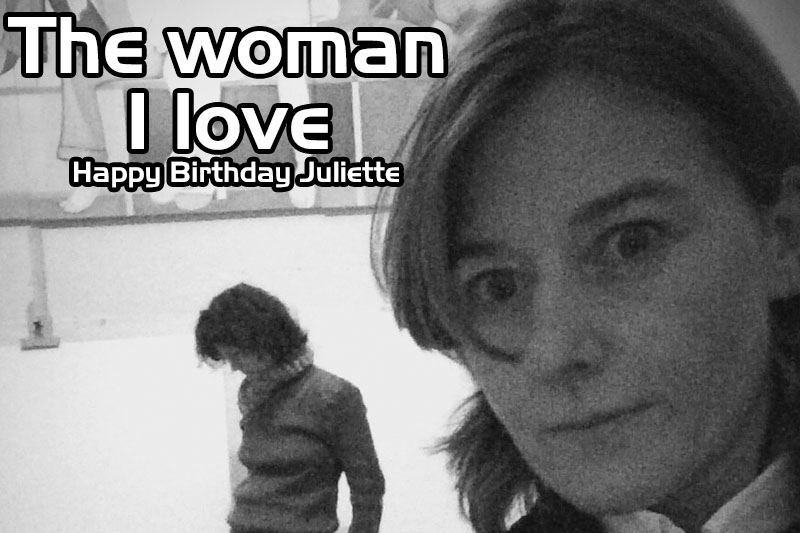 Editor’s Note: The following submission is from Stéphanie Loison. Have an LGBTQ+ related experience or story to share? Having your article published on this site will automatically enrol you into a raffle to win a $50 Amazon Gift Card. Submit an article today via queerdeermedia.com.

[amazon_link asins=’B072MLW3RX’ template=’ProductAdRight’ store=’ourqueerstories-20′ marketplace=’US’ link_id=’f589a240-8cb0-11e7-b8eb-8fa79371862f’]Paris, 2000. I was 27 years old when I first met Juliette. One february evening she arrived by bike at our rehearsal of choral music. The cheeks pinked by the cold, her sparkling look, her smiling face with her long, curly black hair, as well her enthusiasm made me want to know her. She was immediately welcomed into this group of women – it was a mixed group at the beginning but the men progressively disappeared… – who knew each other since a long time and seemed to feel at ease as soon as she arrived (actually she was very impressed, she told me afterward). At the end of the rehearsal we left by car with some chorus-singers and Juliette followed us for a while by bike.
At the back of the car we waved our hand and one of the chorus-singers whispered to me: “Juliette is pretty, isn’t she ?” I agreed.

The following week we saw us again at the rehearsal and exchanged our phone number. From this moment we did not stop seeing us. I learnt that she was 30 and taught history and geography but was passionated about art, painting, drawing and for all possible forms of creation. I told her about my passion for music and theater as well about my tennis competition for17 years which enabled me to channel my inner anger and my energy. A couple of weeks ago I had resigned from my job as a bilingual french-german assistant and worked at that time in a cinema. Curious and funny, she spoke about everything with such an enthusiasm: Schopenhauer, Asimov, Cabaret, the Middle Ages, Offenbach, the earth. We shared many subjects and particularly the same passion about cinema, the movies of F.Truffaut – The Last Metro was a revelation for me at 16 -, C. Sautet, HG. Clouzot, F. Lang, FW. Murnau, J. Cassavetes, O.Welles, F. Fellini, RW. Fassbinder, W.Allen, L.Visconti, R. Rossellini, A. Kaurismäki, I.Bergman, P. Almodovar, R. Altman, Y. Ozu, D.Lynch… Born in Paris, Juliette had frequented a lot of cinemas during her childhood and her adolescence, for my part, coming from a provincial town with less cinemas, I forged my film culture through television and developed it when I came to Paris as a student. A retrospective of Almodovar’s movies at the cinema Le Champo in Paris had doubtless already gathered us in the same projection room, the year previously our meeting.

Very athletic, Juliette took me on inline-skates through the streets of Paris, and we also met at the ice rink, in the bistros, at her place or mine and of course at the rehearsals. Two months after our first meeting, one evening when I was ended my work at the cinema cash desk, I looked up and saw her, sitting in the hall with a wide smile and holding her skates in the hand. We had not planned to see us this evening and the joy I felt at this moment and particularly my heartbeats did not mislead me: I was in love with Juliette. I felt overwhelmed with a mixture of confusion, pleasure and fear. We continued to meet regularly and a few days later I declared my love to her. She didn’t know what to say, was embarrassed like I was and her reaction was finally legitimate: ” But I am straight… I mean, I am not a lesbian…”. To which I answered: “Neither am I …”. The embarrassment was dissipated, we kept our friendship navigating through kindness, affection and tenderness, and one month later it was mutually a loving revelation. Formatted following a heterosexual model, we had no idea what a relation with a woman could be and we looked for an explanation and tried to formulate this desire of a feminine sensuality we already were feeling for a long time. We reviewed the feminine attractions of our childhood, the crushes of our adolescence from the movies and elsewhere: Sigourney Weaver as « Ripley » and Jennifer Beals (shame on me, I had not seen the movie Flashdance at that time, I got only the music on a single…) were part of Juliette’s memories and, regarding me, it was my mathematics teacher, Mylène Farmer and Madonna. Actually there was nothing to explain, nothing to understand, it was like that and it was great. But, indeed, more than the actors, all these actresses had always fascinated us: Romy Schneider, Simone Signoret, Gena Rowlands, Catherine Deneuve, Hanna Schygulla, Isabelle Adjani, Meryl Streep, Annie Girardot, Marlene Dietrich, Isabelle Huppert, Louise Brooks, Setsuko Hara, Anna Magnani, Marie-France Pisier, Marisa Paredes, among others.

2008. The discovery of the show TheLWord corresponds to the beginning of our life between Berlin where Juliette works as a teacher, and Paris where I am employed in the museum at the Centre Pompidou. Having made the decision to live in another country there was a liberation from the cultural barriers (at that time our LGBT movie culture was limited to movies such as Boy’s don t cry, High art and When night is falling). Afterward we wonder how it was possible to live on the same planet without ever having heard spoken about these movie pearls which existed… It was breathtaking, such a shock and many sleepless nights spent watching all TheLWord five seasons. Then 2012 -never too late- we discovered the show of Queer as folk with its own sleepless nights and recently that of OITNB, almost just on time…. Every time a shock and the same question: How do these actresses make to be so credible in their role? How can they do it so true? « I could never do such a performance… », says Juliette. « That’s their job and they do it well», I say, « actually, as a teacher, you not only are acting every day but you are writing your text as well. I could never be a teacher».

Dear Ladies, dear actresses, thank you for your talent of interpretation – you confirmed us to be proud of who we are – and continue to make us dream!