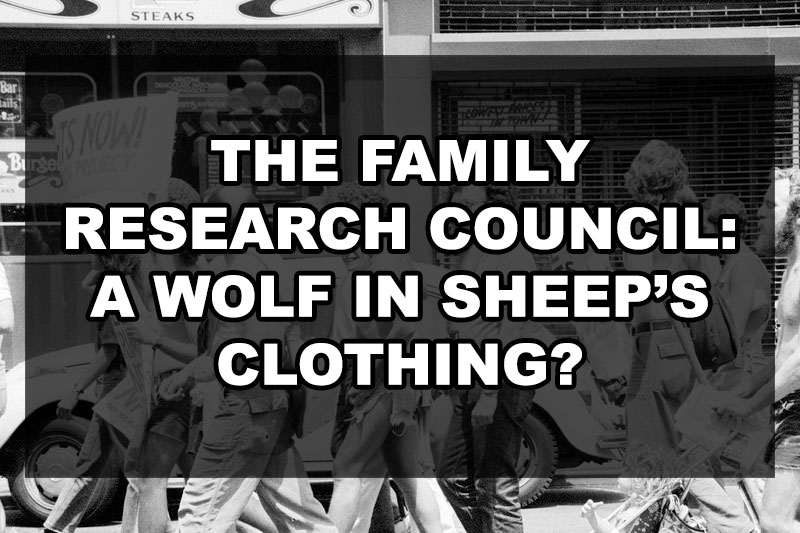 Editor’s Note: The following submission is from Solomon Alexandera. Have an LGBTQ+ related experience or story to share? Having your article published on this site will automatically enrol you into a raffle to win a $50 Amazon Gift Card. Submit an article today via queerdeermedia.com.

In this essay I will not offend the readers sensibilities by asking them to consider an assertion without providing any evidence. It shall be on the reader to draw his or her own conclusions from the evidence that I provide.

The first thing that you might wish to consider is why the Family Research Council is the subject of this essay written by a British man when the organisation is based in the United States of America. FRC came to my attention when a trusted friend informed me that its President, a man by the name of Tony Perkins, had been appointed to the U.S. Commission on International Religious Freedom by recommendation of the United States Senate Majority Leader Mitch McConnell. Prior to me hearing about this appointment I had not known of Tony Perkins existence, the same is true for the FRC.

A reasonable thing for me to do now is provide you facts about why I believe the Family Research Council is noteworthy and worth special attention by those who have same sex attractions and wish the law to preserve their liberty to engage in relationships with those of the same sex.

At this point a question which is prudent to ask is what evidence exists that substantiates the FRC being an organisation which has any power or influence on the law-making process. According to their website the FRC has a staff membership of forty-five individuals. Ten of the total staff are in positions of managerial responsibility, and of these ten there are four individuals who have previously held positions which permit them direct or indirect influence over legislative processes. The President of the FRC, Tony, has connections substantive enough to have influenced the US Senate Majority Leader to appoint him to a Federal Commission; there are also images available on the public Internet which show him with Mike Pence who is the Vice President of the United States of America. I now ask you to consider these facts in deciding as to if the FRC is noteworthy for having influence over law-making processes in the United States of America.

The next part of my earlier assertion which I asked you to consider is that the FRC is noteworthy and worth special consideration by those who have same sex attraction […] In making this decision, I would ask that you review the evidence of activities by the FRC and its management which directly or indirectly impact those with same sex attraction. The Family Research Council spells out its policy regarding homosexuality with a page on their website. In a nutshell, the article illuminates the FRC’s position on homosexuality to be that they view it as harmful to society and individuals. It goes onto assert the view that even the mere act of affirming homosexuality is damaging. These have been shown not to be merely words on paper, but the foundation for actions which endanger fundamental liberties of those with same sex attraction and impede a right of pursuit of happiness for those individuals. For example, the FRC President justified his call on US Congress to pass the Federal Marriage Amendment based on the policy by the FRC regarding homosexuality. For those unfamiliar with the FMA, it is a proposed amendment to the US Constitution which would dictate marriage as to be something between a Man and a Woman and explicitly deny the liberty of those with same sex attraction to attain marriage with a same sex partner.

A reality that seems self-evident when considering all the evidence above, is that the FRC has considerable influence on the legislative processes within the US and that it seeks to use this influence to lay assault on the liberties of those with same sex attraction.

My dear friends, fundamental liberties are incremental to our lives. Those with same sex attraction contribute vastly to our society and ultimately the ability to contribute is bound to a person’s happiness. How can a person continue to be productive without happiness, and I ask you to consider how happiness can be obtained without liberty? The challenge we face is no less than an empowered body of persons who are fundamentally set on removing the liberties of all those with same sex attraction. These individuals fear the way of human progress and set out to destroy it by their actions. It is a responsibility on each one of us to protect liberties, especially the liberties so fundamentally important as made available to those who do not do harm to society. Religious dogma is no evidence of if a person’s sexual attraction to the same gender does harm.

I conclude with this. My Brothers and Sisters who are bound to me by their sexual attraction to those of the same gender, I say to you, do not suffer for the sake of men and women whose only sense of virtue is adopted from their interpretation of an ancient Holy book. That these people are so blind, they cannot see the harm in which they do for the sake of a cause with no rational basis. Yet, we must not stand idle to these threats for it is nothing less than our liberties which are at stake.