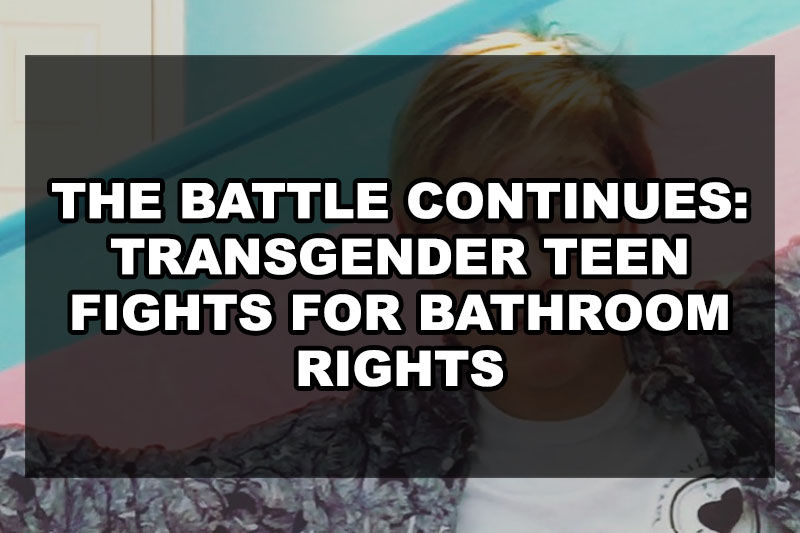 Editor’s Note: The following submission is from Drew Adams. Have an LGBTQ+ related experience or story to share? Having your article published on this site will automatically enrol you into a raffle to win a $50 Amazon Gift Card. Submit an article today via queerdeermedia.com.

It was the summer before I started high school, and I wasn’t going to have any of my old friends or teachers with me, so I simply introduced myself as a guy to everyone I met. Everything was going well for me, my peers accepted me for who I was, and my teachers used the right pronouns when I asked them to.

About two months into the year, I was pulled into the school dean’s office. I was told that I was not allowed to use the men’s bathroom, even though I had been using it for two months without a problem, and I always had a hall pass. I was told that another student had anonymously complained about me being in there. I was told that I could only use the bathroom in the nurse’s office or a bathroom inside of the art classroom. Neither of those bathrooms were conveniently located or near many of my classes, and one required me to interrupt another class. Every time I used one of the gender-neutral restrooms, any other student who saw me was reminded that transgender students are different. I felt alone and isolated, alienated from the rest of the student body. I hid from administrators and teachers in the hallways because if they asked where I was going, and I said the bathroom while walking past a regular student bathroom, the administrator would assume I was skipping class and punish me.

After about a week, my mom and I had a meeting with my school administration to argue for my rights to use the bathrooms like a normal kid. The principal told me that it was a school district policy and that their hands were tied. So I we met with people from the district. We met with everyone up the ladder- all the way to the assistant superintendents. I was told that even though it’s a civil rights issue (and they did use the phrase “civil rights issue,” which surprised me) they weren’t going to change their policy. They said that they were more afraid of an angry parent of a cisgender student suing them because their kid used the bathroom with me than they were of me suing them for my rights. One administrator asked about my genitals, asked about young trans girls flashing people in bathrooms, and made a lot of other very misguided and ignorant comments. My mom and I did our best to educate everyone we spoke with, but they wouldn’t budge.

We decided to take my case to the Department of Education’s Office of Civil Rights and filed a complaint against my school district. Title IX protects students from discrimination based on gender, and as President Obama said, it applies to transgender students, too. Lucky for us, the OCR agreed to take the case. We were put in touch with an investigator who asked the district if they would like to settle this peacefully in mediation. My district declined, even though that meant a full-on government investigation would unfold. Sure enough, several months of investigating the district later, the Office of Civil Rights found my district in violation of Title IX and drafted a resolution agreement. This was fantastic news for us and all of the other transgender students in my district. However, we hit a roadblock when the district decided to decline the resolution agreement. We were stuck.

Ordinarily, the next step would have been for my case to be bundled with others like it and sent to the Department of Justice for further enforcement options. But then, in a terrible case of bad timing, Donald Trump got elected.

Almost immediately, the Trump administration pulled back the trans protection guidance issued by President Obama under Title IX. All of my work was gone, along with the hopes of the local transgender youth community. The school district would not do the right thing unless the law made them, and now, the administration was no longer on our side. President Trump was turning his back on us as one of his first acts in office. Seeing those headlines was one of the most heartbreaking things I have experienced in my life. I felt more defeated then than I had ever felt, knowing that I may never get to use a men’s restroom at school. But I got back up, dusted myself off, and kept fighting. I keep fighting today.

Right now, the transgender community is feeling broken, defeated, and hopeless. We need to stand up, fight back, and support each other. We need to unite, as a community and as a country, against oppressive “bathroom bills” and ignorant leadership that seeks to marginalize us. Most importantly, we need to hold onto hope, because hope is the one thing truly more powerful than fear.