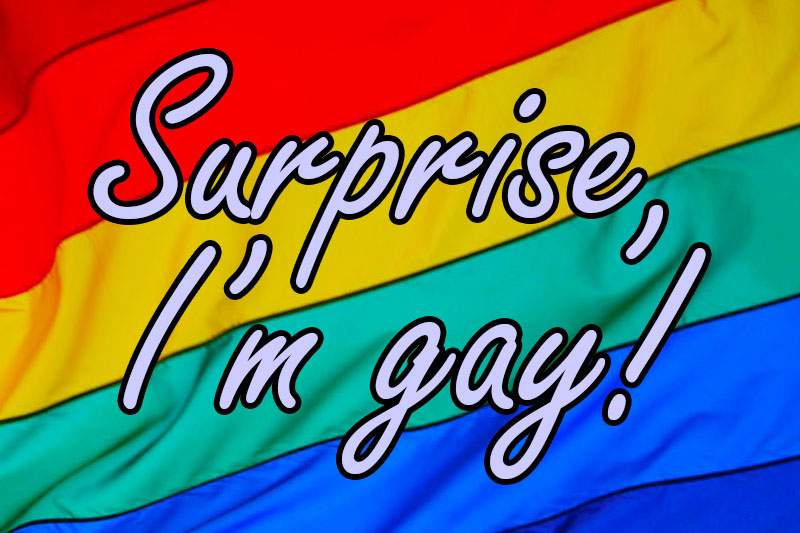 Editor’s Note: The following submission is from Julia Morrison. Have an LGBTQ+ related experience or story to share? Having your article published on this site will automatically enrol you into a raffle to win a $50 Amazon Gift Card. Submit an article today via queerdeermedia.com.

[amazon_link asins=’B072R3XV61′ template=’ProductAdRight’ store=’ourqueerstories-20′ marketplace=’US’ link_id=’f6f1da58-8caf-11e7-b9b5-21cc944697bf’]In another life I was married for ten years. To a man. This information always seems to throw people off when they first hear about it. I frequently get questions like “how does that work?” or “how did you end up dating women?” And to many people it probably seems confusing or surprising, but it was actually a long time coming. In elementary school I remember noticing girls in a way that maybe not all girls do, but I never acted on it. Similarly, in high school, the only dates I went on were with boys. As a teenager, my vision of the future followed the traditional “American Dream”, and involved going to college, getting married (to a man), having children, and buying a house. Just as it never occurred to me that I wouldn’t go to college, it also never occurred to me that there were multiple versions of the “American Dream,” or that I had to find the one that fit me.

In college, I had a crush on a co-worker that I thought was the most beautiful woman I had ever seen. Carolyn was a few years older and basically the coolest person I had ever met. She moved here from another state, was living on her own, and always had exciting stories to tell about people she’d met and places she’d been. But despite the attraction, I still considered myself straight. I had never felt such a strong pull towards another woman, so in my mind, it was possible that it was just about her. I wanted desperately to spend time with her socially, but of course she was dating someone, and none of my attempts to hang out with her outside of work resulted in anything. I started experimenting a bit and kissed a few other women, but none that I was interested in pursuing. At some point, I gave up on the fantasy that anything would happen with Carolyn. She eventually went to work somewhere else, and I essentially put girls out of my mind. Not long after, I met my future ex-husband and set about living that so-called “American Dream”.

Looking back, I can see that I took the easier path because it was familiar and comfortable. Rather than making choices based on what would make me happy, I allowed my fear to make choices for me. Over the next twelve years I did a lot of growing up. I had always considered myself to be accepting and progressive, but in reality I was pretty sheltered. Most of my childhood friends were from similar backgrounds, and though I valued diversity in theory, I hadn’t really been exposed to it. Starting my teaching career, having a child, widening my circle of friends, and experiencing new things all helped me to realize that there were many different ways that a person could live, and be happy.

After getting divorced (you can read all about that in the previous post “On children’s books and divorce”), it seemed like the perfect time to revisit old feelings that had been brought up in college. I wasn’t quite ready to label myself as gay, so when I signed up for the OkCupid dating site, I checked “bi”, even though I had no interest in dating men. I started going out on dates fairly quickly, which was an experience in and of itself. The last time I had dated I was in my early 20s and let me tell you, dating as an adult is a whole other ballgame. Plus, I had never dated women before, so that added an extra layer of complication. I felt like a teenager again- bumbling around in the dark trying really hard not to look totally stupid. It was incredibly scary, but this time I vowed not to let my fear hold me back like it had in the past.

I had a few decent dates and a few terrible ones that would definitely make for good stories later. Then, I finally met a woman who seemed like the perfect match. Alex* was smart, kind, and adventurous – all things that I found attractive. Even though we had emailed and texted quite a bit, I was incredibly nervous to meet her. I was still trying to figure out who I was, and Alex seemed confident and experienced. I wouldn’t say that it was a great date – my anxiety kept me from really enjoying it and I didn’t think that she was particularly interested in me. So when she asked to go out again, I was really excited! I was still fairly nervous the second time, but was eventually able to relax and have a good time. We had a lot in common, but enough different experiences that I was sure I could learn a lot from her.

After a few dates with Alex, I knew that I really liked her. On the other hand, I also felt a little apprehensive, because other than a few close friends I hadn’t told many people that I was dating women. I knew that I needed to start telling people, but I had just gotten past the stress of “surprise, I’m getting divorced!” and was really anxious about the “surprise, I’m gay!” talk, particularly with my mom. She had always been very liberal and open minded, so I wasn’t worried that she would be upset with me. It was more that it was just awkward. How do you work that into a conversation? At one point I jokingly (ok, maybe I was sort of serious) asked my friend Jessica if she thought it would be ok to just send my parents an email, rather than having the conversation face to face. Jessica, good friend that she is, told me to “grow some balls” and just tell them. I knew deep down that if I was really going to move on with living an authentic life then the people I cared about needed to know the whole me, not just a part that I chose to share with them.

I fretted over it for a bit, but finally decided to just go for it. I was over at my mom’s house the weekend of Pride, and from there I was going to meet Alex at the festival. This seemed like as good a time as ever to talk to my mom. I began by telling her that I had started dating again (better late than never, right?), and then just sort of blurted out that I was actually dating women. My mom looked at me like “I’m sorry, what now?”. Needless to say she was a little shocked, which I completely understood. I had never expressed any interest in women to her, so it must have been unexpected. Luckily, she recovered quickly, and basically told me that whatever made me happy was good with her. And isn’t that really the best you can hope for? That the people in your life will want what makes you happy? As it turns out, I really had nothing to worry about, with my mom or anyone else. I had several more “coming out” conversations and they all resulted in pretty much the same thing – everyone wanted me to be happy. As it turns out, that is the real American Dream.