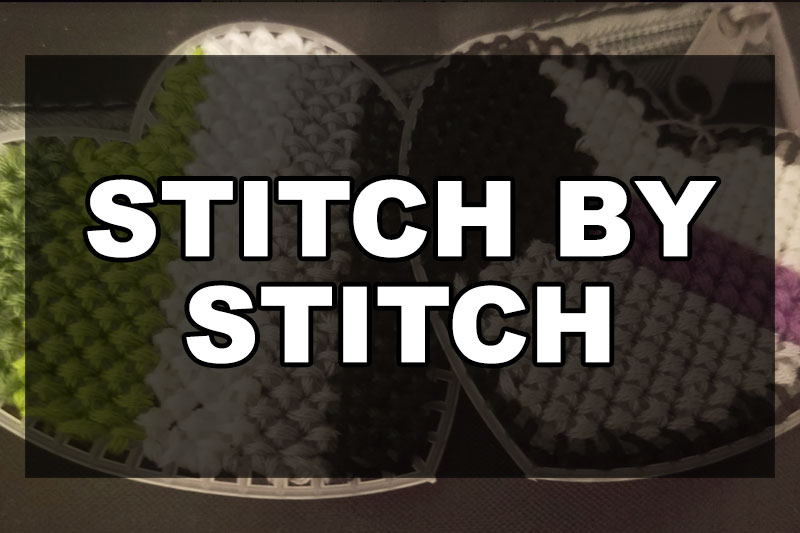 Editor’s Note: The following submission is from Rebecca Clovis. Have an LGBTQ+ related experience or story to share? Having your article published on this site will automatically enrol you into a raffle to win a $50 Amazon Gift Card. Submit an article today via queerdeermedia.com.

When I first thought about buying plastic canvas, it was to stitch a keychain or zipper pull in asexuality spectrum colors, probably in a demisexual pattern. My demisexuality was solid ground, and I felt ready to wear its colors and symbols.

It didn’t occur to me to stitch something in aromantic spectrum colors, at least not for myself. I would I have told you I was very alloromantic, that I’d had numerous crushes, that I had crushed on people easily for a decade.

But between the seed of the idea and buying the supplies, I happened upon the definition of quoiromantic.

It wasn’t like the first time I saw the word demisexual. That had been something snapping into place, an instant certainty that this was me. With quoiromantic, there was resonance, but it wasn’t quite right. Wasn’t everything, like maybe my romantic identity had some frequency spectrum and quoiromanticism couldn’t account for all the power. It was still enough to make me stop, wonder, and reevaluate.

It’s tricky, trying to reevaluate the past. I have memories and things I wrote, but memories feel manipulable, and I didn’t usually write about crushes. But with what evidence I had, I came to the conclusion that for that decade, I had consistently misinterpreted feelings of or desire for friendship with men as romantic attraction. I hadn’t always been wrong; some cases I wasn’t sure about, and I did feel romantic attraction to my boyfriend. But in the time it took to read about quoiromanticism and write a journal entry, I went from “I’m very alloromantic” to “I’m… confused.”

I had followed a lot of aces, some of them aro, on Twitter the past fall, and I started paying more attention to what the aro(spec) aces wrote about aromanticism. I lurked on #arochat, and I’m grateful for how welcoming the Twitter aro community was and is to questioning folks. They made it safe for me to be unsure, let me say “maybe aro” to myself without feeling like I was trespassing. I didn’t say it publicly, but I held onto the words, wondering. Trying to find where I fit, whether I fit.

I returned, over and over, to words Seanan McGuire had tweeted in October 2016: “The words you hang on your heart are there for your comfort and convenience, not for anyone else to police or define.”

I bought plastic canvas hearts and some embroidery floss. (Why I used floss for plastic canvas is another story, but for y’all wondering, it was a mistake. Use yarn. And appropriate needles.)

I made a demisexual heart. I learned a lot about working on plastic canvas along the way, but it was a decent first attempt. It was too big for a keychain, so I tied it to the zipper on my backpack. I finished it on the evening of March 4, 2017, and some parts of Twitter had been an ace- and aro-antagonistic mess. I posted a picture of the heart with the note “Much love to ace and aro spec folks tonight.”

I don’t remember if it was because of the timing or if I’d already decided, but I started on an arospec heart. Even though I wasn’t sure. Even though where I stood was still “maybe grayromantic in a quoiro-ish way.”

I stitched. I still didn’t know what I was doing with plastic canvas, was still using floss, was still using small sharps instead of larger blunts. It was messy and uncertain, and my five stripes — two shades of green, white, gray, and black — were uneven. Over spring break, I took it with me when I visited my boyfriend, and I stitched on his dorm room couch. He had seen my demisexual heart and asked me what these colors were. I wasn’t ready; I kept stitching.

Five stripes. One, two, three, four, five. I decided not to do a border.

I finished the heart, and then I said the words out loud for the first time. “I’m maybe on the aromantic spectrum.” Offered to someone else the words that sounded true. Soon after, I added grayromantic to my Twitter bio. It wasn’t a word that captured all the contours, but it seemed like the right umbrella.

If nothing else, it was the word I chose for my comfort and convenience. The word I had listened, read, self-interrogated, and stitched my way to. It wasn’t certainty, but it was enough.