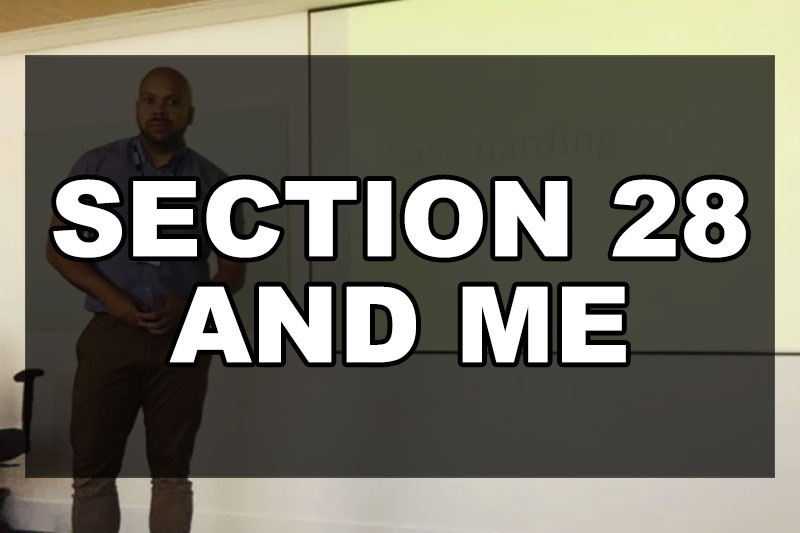 Editor’s Note: The following submission is from Ashley Spiers. Have an LGBTQ+ related experience or story to share? Having your article published on this site will automatically enrol you into a raffle to win a $50 Amazon Gift Card. Submit an article today via queerdeermedia.com.

I was busy teaching a session about British Values the other day and I felt like a fraud. ‘It is British to allow everyone to be exactly who they want to be!’

If you are a teacher as old as me (cough cough) you will remember teaching under the discriminatory legislation, Section 28. I was a confident, young, gay teacher in 2003. I’m still all of those things but just not that young now. If I had told my students that it was okay to be gay I could have been dismissed, arrested and potentially thrown in prison.

This is in the UK. Not Chechnya.

So, Section 28 was a piece of government legislation forming part of the Local Government Act 1988. It specifically advised that the local authority ‘”shall not intentionally promote homosexuality or publish material with the intention of promoting homosexuality” or “promote the teaching in any maintained school of the acceptability of homosexuality as a pretended family relationship”. Section 28 was repealed in November 2003 after lobbying by Stonewall in the light of changing social attitudes. In fact Stonewall was set up specifically to lobby the government about this law.

Firstly, it is such an odd use of the word ‘promoting’. And I use it myself in my work now. ‘How are you promoting diversity in this session?’ It sort of sounds like we’re recruiting for members. Nobody is or ever was actively encouraging homosexuality. It’s quite a commitment to simply ‘become’ gay. And you’re really unlikely just to give it a go because someone has bigged it up.
Unfortunately, Section 28 was reflective of British attitudes in 1987, where 75% of people in the UK strongly believed that homosexuality was wrong. We’ve come a long way really.

The great philosopher, Paulo Freire stated, “Washing one’s hands of the conflict between the powerful and the powerless means to side with the powerful, not to be neutral.” Teachers that identified as LGBT, like me, felt powerless. However in not challenging this oppression, was I complicit? I just went along with what I was told to do. ‘Don’t talk about being gay, Ashley, it’s not relevant’.

When there is such a clear notion of what is perceived to be normal, anything that is different from that is simply seen as deviant. Schools have traditionally been exclusively heteronormative environments with clearly defined gender roles in the subject areas, and literatures that mainly explore one ‘proper’ idea of relationships. In more recent times it has become the role of schools to battle these notions of normality and offer alternative views to aspects of life such as families and relationships, so that oppression due to sexual orientation can no longer take place.

So now what? I take every opportunity I can to speak about LGBT issues in my work. This is my chance. It still feels weird and almost naughty that I am allowed to. But my goodness, I am going to speak. Of course I am expecting at any moment someone to burst through my classroom door and shout ‘what are you doing? What’s this got to do with anything?’
Well it’s got plenty to do with my everything. So I shall keep on.