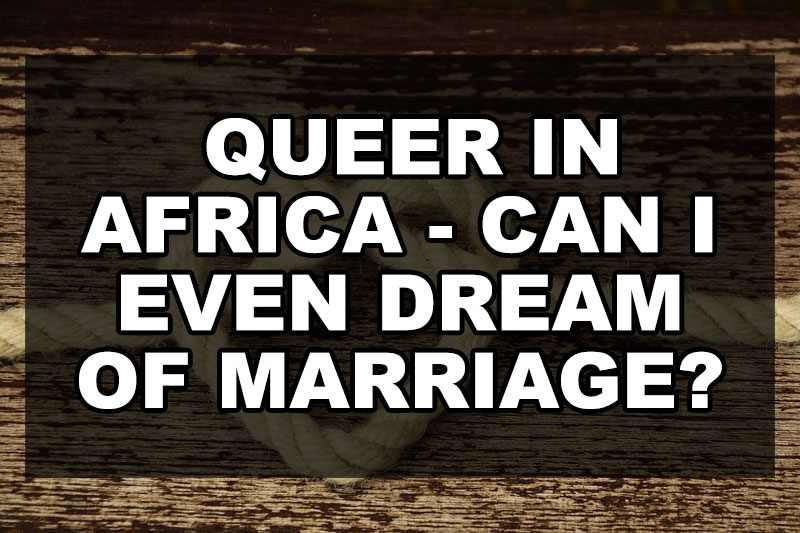 [amazon_link asins=’1620971542′ template=’ProductAdRight’ store=’ourqueerstories-20′ marketplace=’US’ link_id=’b1509f4d-e79a-11e7-87d4-f589819c7a76′]This question has been weighing heavily on my mind for a while. I know there are various reasons that keep some folks from getting married. Some choose not to. Some are forbidden from getting married so they can fulfil their religious duties. Some are afraid of commitment. Some cannot afford marriage. Some have not found the one to settle down with. But as a queer person living in Zimbabwe- just one of the many other African countries where homosexuality is illegal, marriage only seems to be an esoteric concept reserved only for those who conform to (cis)heteronormative standards.

It is disheartening to note that only one country in Africa (South Africa) legalised same gender marriage. This is not to say that queer folks residing in the country do not encounter queerphobia- they do. In a country where such laws provide what can turn out to be a “false” sense of security, we see more LGBT+ folks being open about their sexualities (or gender identities). There is increased visibility of the LGBT+ community and with that openness comes the increased intolerance of queerphobes who now also feel “we are in their face”. Some of them act on their hatred thus posing a huge threat to the livelihood of queer folks. We’ve all read about homophobic men raping queer women and many experiencing all other kinds of abuse.

Africa is known to be a deeply religious (and still the poorest) continent with the Abrahamic religions (Christianity and Islam) enjoying greater distribution. Religion has had (and still has) a powerful influence on people. Religion continues to inform the way society functions; it is the system upon which many other systems are predicated. Patriarchy, tribalism, homophobia and so on all have roots in religion and that is why people justify their (oppressive) actions using religion. As Richard Dawkins, author of ‘The God Delusion’, bluntly put it ‘hate only needs to prove it is religious and then it stops counting as hate’. Religion trumps all, sad to reiterate!

Africa continues to be a dark, unsafe space for LGBT+ folks. Laws forbidding same gender relationships only seem to be getting harsher with punishment for those caught getting stricter. In some countries like Sudan, anyone “convicted of this crime” faces the death penalty. While many of us wallow in this hate, some have been fortunate enough to find refuge in countries overseas where they are freer to be open about their identities, freer to find love and be in stable relationships, freer to marry, freer to just BE. Those of us who have not been so fortunate are forced to endure, to varying extents, the weight of the bigotry in our different African countries. Some of us are in closets because “coming out” is both a risk and a privilege. To most of us, coming out is a risk. You risk being excommunicated from church; you risk being rejected by a (shamed) family; you risk being shunned by friends; you risk losing your job or not landing one; you risk being killed, being raped or being abused in any form. COMING. OUT. IS. A. RISK. Most of us just choose living a “double life” for our own safety, however burdensome this can be. Better safe than sorry, hungry, lonely, or…dead, right? Sigh!

I think about marriage a lot now as I think about many things that have happened in my life, are happening and envision the future. I do not see marriage as an accomplishment but I would be lying if I said a part of me does not want to get married one day. But, is marriage just a dream that never will be unless there is massive reform in the attitude towards homosexuality in our countries? Will I only be able to get married if I am able to move to a country where homosexual marriage is legal? What if I am not even able to go to such a country? Will I have to resort to living with my partner (if I’m even able to find one and be in a serious relationship with them), all the while pretending to be two friends co-habiting because we don’t want the neighbours raising their eyebrows in suspicion? Will I have to brace myself for a future where marriage isn’t a possibility; will I have to resort to telling myself and others that “I’m just not cut out for marriage” all in a bid to mask the pain of the longing crushed by bigotry? Should I even burden myself with imagining a future in an environment filled with hate for people like me? Is marriage even important; should all that should matter be the relationship and the love being given and received? So many questions…