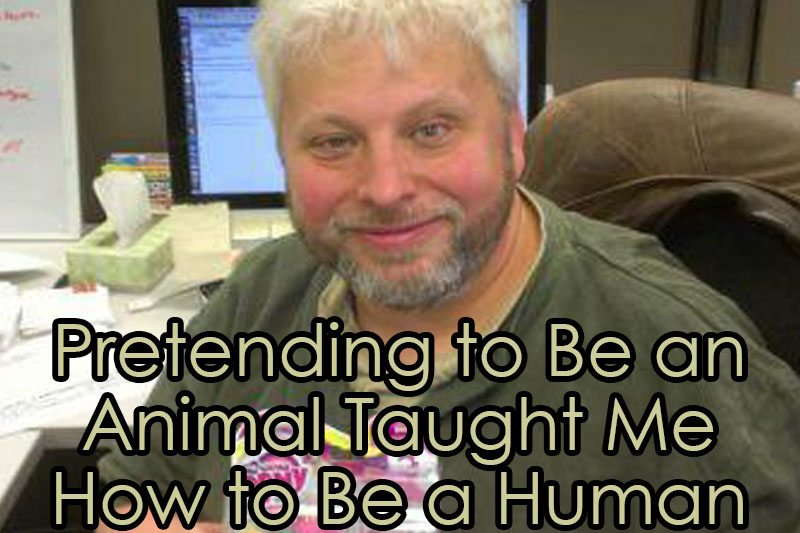 Editor’s Note: The following submission is from Bill Kieffer. Have an LGBTQ+ related experience or story to share? Having your article published on this site will automatically enrol you into a raffle to win a $50 Amazon Gift Card. Submit an article today via queerdeermedia.com.

But I did survive and grow. I didn’t exactly thrive. Loving mother but a parade of abusive father figures… I escaped broken bones and lacerations, although my mother did not.

People could see there was something different about me. It was the 70’s and people often believed that different was wrong. Not in the way it would have been wrong in the 50’s, but still, children are cruel in any decade. I was called queer, faggot, and gay, like it was a bad thing and I, too, believed these were bad things.

I went through my school days with so many deep and violent thoughts. I gave them vent through art and writing and shared very little until I discovered Star Trek fans groups.

And I found expression their that eased my soul.

I moved on to Science Fiction fandom, and began reading whatever I could get my hands on, and that, too, eased my soul.

I discovered a comic book shop and a whole new world opened for me and the dark violence in my soul, all the revenge thirst from the sleepless nights of wondering if that was one of my step-fathers I heard outside, hibernated. I was happy, except for nightmares and crushing bouts of depression.

I fell in love twice, by this point. One girl I lost to cystic fibrosis just out of high school and the other girl who became my wife, my strength, my pillar, and my touchstone. Without Michele, the depression would have become insanity. I was certainly not an easy person to live with and I know I came close to losing her several times.

We joke now that she’s the man in the family, but there were many years that this did not sit right with my cop-raised, republican-raised wife. I don’t know why I am so lucky to have her at my side. But I am grateful.

About the same time I started getting published in comic books, we got the INTERNET. Well, ok, Prodigy. Then AOL. Then the Internet. My wife discovered chat-based sex first, or TinySex as it was called. It did nothing for me.  I did discover naked men on the internet… and that… triggered a lot of violent thoughts in my head.

I don’t know how many therapy sessions I went to complaining that my nightmares of abuse and revenge were coming back in my 30’s with the now added confusing sensations of arousal.

We changed my medication.

I went to art class in NYC to study how to write comic books with Denny O’Neal. I had a direction in my life and I had no doubt that comics would be my life. Denny had read my stuff and he seemed willing to be convinced, too. He said he’d be willing to look at a Catwoman script if I wrote one, because it was always good to have a fill-in issue ready, just in case.

I started one, but I also spent some time writing out series proposals for new comics. You know, just in case. Adult and gritty revisionist stories were hot. One of my proposed series was an extreme and gritty retelling of a funny-animal superhero group name Captain Carrot and the Zoo Crew. The major story arc involved a cat and dog in love and the heartbreak that they could never have children. At the same time, a supervillian decided that he’d turn everyone into the same species so love and harmony would prevail. Conflict ensues.

My wife looked them over and said, “I don’t think there’s much of a market for sexually active cartoon characters.” I knew about Fritz the Cat and Omaha The Cat Dancer, but those are niche books. I really couldn’t say if they alone would generate enough interest to justify DC sullying what many perceived to be a children’s line of comics.

I went into Furry as a tourist. It wasn’t like the other fandoms and groups that I had previously had been in. Yes, in Star Trek fan groups there were certainly collections of fans that styled themselves as “Starships,” complete with military ranks, rather than simple fan clubs with presidents and treasurers  under Robert’s Rules of Order.

When you are a Furry, you become a part of the thing you are a fan of. You become the thing, the creation, that you are a fan of. As a fan of anything else, you strive to support, promote, and appreciate that concept. In the Furry fandom, as it turns out, it’s less about the animals and it’s more about identity.

So, I became Charger, a six-foot tall horse in order to learn about Furries. To spy, in other words. I learned about where to post art and where to post writing, and perhaps, most importantly to my mission I learned that Furries have a lot of disposable income. If they don’t they find it and after figuring out that, I should have typed it up and send it to Denny.

But, the truth was, I was enameled with this community of creators. Even the least creative Furry created themselves every day.

Until I had discovered Furry, I had believed, like so many normal people that identity was something that you were born with. Yes, you could add to it with things you earned from you actions, but the basics were hard and unchanging.

I made a more aggressive, dominant fursona, Greyflank.

Then I met the man who would inspire my upcoming novella, The Goat: Building a Perfect Victim from Red Ferret Press.

When I met G.G. (not his name), I was hiding behind a mask of Greyflank and even though he

were also masked as a talking Goat, he was more himself, more vulnerable online, MORE HUMAN, than he was allowed to be in real life.  He was the opposite of anyone I had met online in that way. Furry was, for G.G., the only safe place he had ever known.  Furry was about bringing G.G. out. I played out virtual sex with him, thinking it was just a game for him. I was wrong, and he quickly let me know that very politely. I wasn’t the type to just have casual sex, but my character was, and I explained that. He accepted the premise and we became quite the couple.

Pretending to be a horse on the Internet meant I got to learn many horse facts.  Hooves are merely on the toe of the horse, not the foot. Horses have no gag reflex (that worked out nicely for me). There were full grown ponies.

Being G.G.’s owner, I learned more about LGBT issues than I ever did from my real life gay friends (all three of them). Not the headline issues like the current hope for a cure or who was recently outed, but day to day issues like finding a roommate, or how you introduce a kink to a partner, or even how to hard it is to convince a lover that you want him as a boyfriend and not a nameless John.

Furry is the most accepting place in the world, but it has its limits.

It’s not the real world.

I had a wife; I was settled in, enjoying what I think is now termed “Straight Privilege.” I hated labels and I though by not labeling myself, I was defying the system. But like in school, there was no difference in defying or denying the system. Refusal to participate merely let other people define you.

I lucked out to have stumbled into a situation where I was comfortable with being “straight enough to keep my wife happy.” If people got a lavender vibe off of me, they would simply mark it as being a result of my “creativity.

But what G.G. was… He was in New England where things were still conservative. He there on a work visa and sooner or later he was going to have to return to Italy.  If New England was repressive to his hearty gay genes, then his little village in the northernmost part of Italy was a No-Fly Zone.

Over a year or so, I watched him butt up against the limits of the Furry muck we were on. The more he created in the virtual world, the more he realized that he could never get it in real life.

Eventually, he had to make a hard choice for himself. I know that it pained him to leave the fantasy world behind. There’d been too many nights when he’d been suicidal or self-inflicted injuries in an attempt recreate his sexual fantasies. He needed to find a way to get his real self into the real world, and he could not do that with Furry distractions.

So, I watched him leave like he was some sort of Greek tragic hero. I cried for him… and for the first time I began to think of G.G. and his player as two separate people.  His goat fursona slept, unerased, for over a year. Sometimes, I’d check in on him. He never logged back on and eventually that virtual world ceased to exist.

G.G. sold me on the best things about Furry and about being true to myself.  I held Furry close to my heart the way a knight carries the handkerchief of the beloved he can never have. I held it

close because it was something you’d left behind.

I had crossed my fingers that he would find what he needed, or at least close enough in real life. Every two years or so, I would check in with his player, Tony (still not his real name). Sometimes, I would get an answer. Sometimes not.

It’s been about a decade since he left. I’m never Charger online anymore and Greyflank has evolved into me a bit… and I have evolved into him. I carry my bisexual label proudly, my desk at work is decorated at work with My Little Pony stuff. I sometimes dye my hair pink. It didn’t fly so at some places, but at my current job? They are accepting and I feel welcomed.

I’ve spoken to Tony recently. He is in England, now. He calls himself by his furry name, as does his lover and all his mates. Just about everything he ever wanted, he has.

What he doesn’t have, he says he outgrew.

G.G.’s dreams had seem impossible at the time.  I’m so happy to know he survived several crushing defeats to finally get his happy ending.

His lover is now reading the final draft of my novella. He gets final say in whether or not I mention G.G.’s or Tony’s name (his real names) in the introduction or the dedication of the book. He made my goat happy: I owe him a debt.

In pretending to be animals, all our interactions were in text. Language and human constructs facilitated our intercourse. Our brains are truly our largest sexual organs and miles away we touched each other with our words. We shared our words, our hearts, and our desires, but what we each took away was from our experiences was different.

Furry is a mirror and what we lie about just brings us closer to the truth.