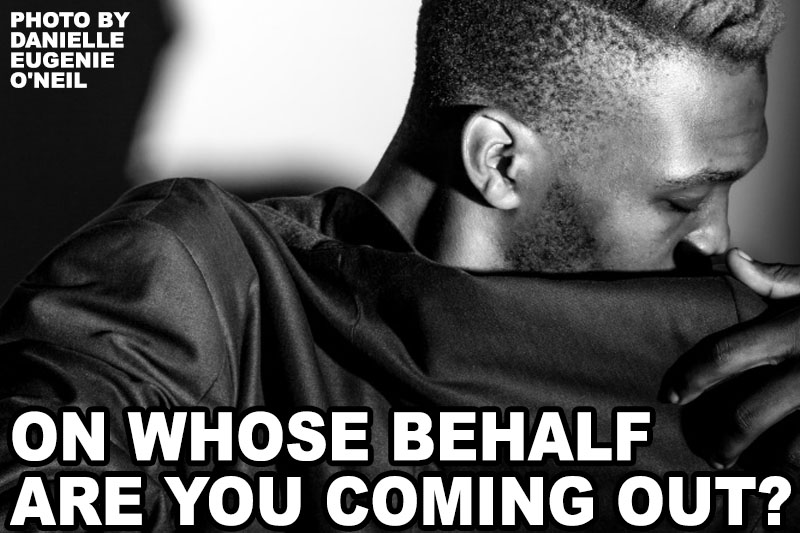 Editor’s Note: The following submission is from Kamogelo Molobye. Have an LGBTQ+ related experience or story to share? Having your article published on this site will automatically enrol you into a raffle to win a $50 Amazon Gift Card. Submit an article today via queerdeermedia.com.

[amazon_link asins=’B00M4W2VG8′ template=’ProductAdRight’ store=’ourqueerstories-20′ marketplace=’US’ link_id=’2f23a519-8caf-11e7-86ae-6da03e12863e’]I am sitting in my mother’s bedroom watching television – heart throbbing as I fix myself to break the news to her about my sexual orientation once she returns back from work. I had spent the entire day with my phone firmly in hand as I was googling ‘appropriate ways to come out’ while also awaiting responses from my eldest cousins on how to go about doing it.

From the time I realised that I was gay I had never truly understood the notion of having to ‘come out’ – to make a public declaration of my sexed self. In many instances I had been thrust into labels and categories that already shamed my sexual orientation: those that were openly gay and could tell that I was gay would find shame in me being ‘closeted’, while those that were heterosexual would taunt me with offensive slurs such as ‘stabane’, ‘moffie’ and ‘faggot’.

Coming out has been defined as “the process of recognising, exploring, integrating, and disclosing an alternative sexual orientation.” i This is to say that coming out becomes the public declaration of a differently sexed body to heterosexuality and heteronormativity with the sole purpose of finding a form of liberation. However, there is a need to problematize and critique the act of coming out.

While many may argue that the self-proclamation of sexual minorities outside of heterosexuality and heteronormativity creates a space for pride, safety, and feeling free, many of those that are LGBTQ continue to face threats of corrective rape, abuse, shaming, and ostracization – be they coded, subtle, or literal. And so, the question that has to be asked is: where is the space that allows for agency and liberation when one has to declare themselves – within a heteronormative structure – in order to seek recognition and acceptance?

As a young gay man then ready to share my sexual orientation with my mother I had already read and heard of many stories that had left a bitter taste in my mouth. Stories of parents and family members who had beaten, cursed at, kicked out, disowned, taken to church to heal and fix their children. I read and heard many such stories, but very few on the embracing and welcoming family – one that would willingly accept homosexuality with open arms. And so, there was fear and reluctance in saying anything to my mother about my sexuality.

As I sat there waiting for my mother’s return I was growing frustrated and nervous, and no one and nothing could inform me of a way to come out. Nothing could tell me how to do it: do I serve her tea first, followed by rubbing her tired feet from a day at work, and then break the news to her; or do I simply pull the pin off the grenade, close my eyes, and throw?

The act of coming out has been used by many – both homosexual and heterosexual – as a means of pursuing a necessary and timely approval and tolerance from heterosexuality and heteronormativity. One is faced with external violence to publically declare one’s sexuality because they are ‘closeted’ or because they are ‘obviously gay and trying to deny it’, while tackling internal difficulties of how to go about coming out and whether or not it will be received and welcomed with open arms by family and friends alike. This in turn thrusts many queer people in spaces where they constantly have to be self-aware of their sexual performativity in public spaces and the politics of their self-representation so as to not “slip up”.

As such, coming out should not be perceived as the act of stepping into a heteronormative society in order to seek acceptance and approval within its operational structures.

While it is true that for most ‘coming out’ has afforded them the liberation and freedom that they so craved to live without self-surveillance and policed expression and performativity, for many it is a means of finding presence and existence in a heteronormative society that seems to decide who gets to live without judgement and persecution. And so, it is important to question whether or not ‘coming out’ as it currently stands facilitates the space for providing a counter hegemonic confrontation to heteronormativity?

For a very long time I had been bothered by my mother surprising me with the way she responded to my coming out. She looked at me and said, “Kamo, you are my child and I will love you as I always have.” I was bothered because I expected myself to be part of the other side of the narrative. To be cursed, kicked at, prayed for, or disowned. This immense pressure that is placed on sexual minorities differently sexed to heteronormativity and heterosexuality places many queer people against the backdrop of impossibility. This is because many come out to seek liberation from ostracization from heteronormative structures, but also to invite family and friends into an intimate sharing of their sexual identities.

The ability to share one’s differently sexed body should be a process that encourages a refusal to further categorisation from heteronormative structures of ‘tolerance’. It should be a process that frustrates heteronormative hierarchies and binaries as opposed to seeking validation and acceptance from them to survive and exist within them through the rules and regulation dictated by them. As queer bodies we need to re-construct new models, practices, and modes of identity naming and acceptance – if need be – that stays away from acceptance from heteronormativity as a point of departure.