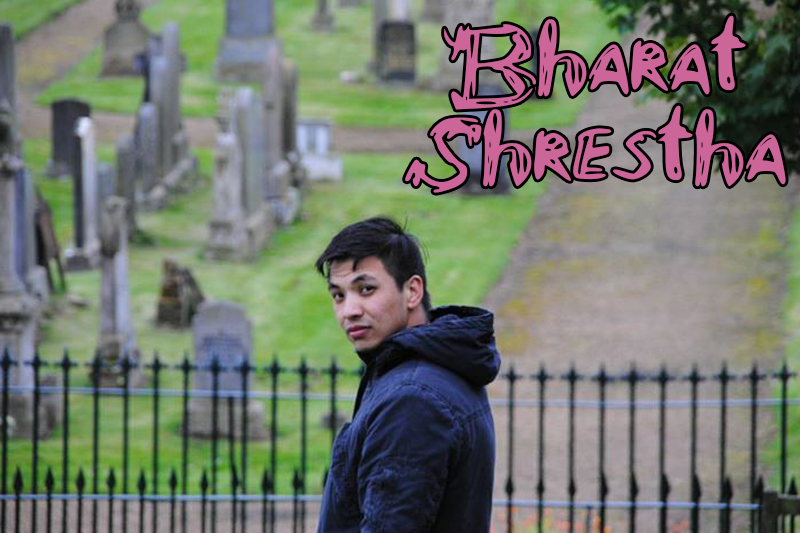 Editor’s Note: The following submission is from Bharat Shrestha. Have an LGBTQ+ related experience or story to share? Having your article published on this site will automatically enrol you into a raffle to win a $50 Amazon Gift Card. Submit an article today via queerdeermedia.com.

[amazon_link asins=’B072QMGFYG’ template=’ProductAdRight’ store=’ourqueerstories-20′ marketplace=’US’ link_id=’393165fb-8cd9-11e7-a61e-db8c35add8a2′]I always remember from my school days going to bed and doing all kinds of thinking. Alone in my room, I would always pray, God, when I wake up in the morning, please make me normal. I used to feel such low self-esteem and low confidence. Then in the morning it was just another day with the same feeling.
I grew up in Chautara, 84 kilometers north-east of Kathmandu, in a mountainous region of Nepal. It’s a small hilly town at about 1,800 meters of altitude, and from Chautara one can see most of the mountains of the Langtang Mountain range, like Mount Ganesh, and when the weather is clear we can even see Mount Gaurishankar to the far east.

Life was very difficult and frustrating growing up gay in a small hill town like Chautara in Nepal. I had no friends and no access to information (no internet facility was there). No wonder I thought I was ABNORMAL and I was so wrong to have all those feelings (I felt as if I have committed a sin and it was god’s punishment to me). It was very depressing and confusing. I had the hardest time fighting with my own thoughts (it was self-stigma, I guess), and I pretended to do everything that would make me NORMAL (at least for society). I always knew, I will have a hard life in future because of my unconventional orientation, and I won’t be able to live with my family (like my brothers and cousins) forever. That feeling was frightening like hell. Because of this fear, I gave so much of my energy in my studies. I am glad I did not let this fear feeling hamper my studies at all. I had no friends, nor did I have any play mates then. I had no option, than to be a bookworm!

After my school, my parent decided to send me to a college in Kathmandu for my higher studies (thanks to my academic grades and result in school board exam i.e, SLC). But it was not until I completed my undergraduate course when my life started to unfold in an uncertain way. I was in a complete closet still then, as I was not able to come to terms with my sexuality. All those years I fought hard to be NORMAL. God shows ways in a mysterious way. It must be fate that I decided to do one volunteering project with British students. And fortunately one of my counterparts was gay. I can still remember how amused I was to learn that he was gay; such a huge relief to finally meet someone like me. The discussion on gay issues within the team was so fascinating and liberating. I started talking with him and eventually we ended up being such a great friend. We shared our painful experiences growing up gay in our hometowns. It was disheartening to know how difficult it was for him too, growing up gay even in progressive country like Britain. Such a pity world this is for gay people, I thought.

And then I went to Britain in 2009 to do my post graduate degree. This was my life-changing decision. I was able to learn, see and experience gay life there. In a way it was comforting and this time, it did not take me long to accept my sexuality. I came to a terms with it, and this was my first coming out with myself. I must admit, this was the hardest coming out, and I cannot explain how invigorating feeling it was. For the first time in my life, I felt free and real being myself. Once I overcame this self-struggle, I decided to come out to my friends and cousins. In every coming out, my friends were so scared for me, because of the family expectation and societal stigma attached to it. Some were even shocked and wondered how I could be gay if I do not cross-dress and if I look so much like other NORMAL boy (many people often misinterpret gay identity with cross-dresser & transgender identity in Nepal). I used all media (skype, facebook, email, phone) to come out in the past. I was lucky that all my friends and cousin were very tolerant and accepting. But in the beginning phase of coming out process, I find it difficult to convince one of my cousins: he imposed many prospective issues such as marriage, my future family life, coming out to family/society for which I had no answer. It was depressing, but every time I came out to someone, no matter how they reacted, I felt a huge burden released. The hardest coming out of all was with my own sister and brother. I told my sister in 2012 immediately after I came back from England. I was able to convince her (I showed my gay friends’ photos, gay marriage photo and stuff), but we have not talked about it since then and it is so disturbing. My coming out with my only brother was more distressing. It was very recent (in August 2015). He is one person in my family who has always been very keen about my marriage. He keeps on asking me about my girlfriend or prospective future bride! That is why it was very difficult for me to open up with him.

The destructive earthquake of 25 April 2015 has shattered my hometown, Chautara completely (including my parents’ house). Since then my family have been living in temporary camp. Therefore I visit them every other weekend to support them in whatever way I could. During one of my weekend visit to Chautara, my brother wanted to have some serious discussion on family matters with me. And then he started talking about my marriage, if I am willing to marry anytime soon and that they are very much looking forward to it. Every time when he used to ask me that question, I used to feel very uncomfortable. But that day I decided to tell him anyway. I guess, there is never a better time to tell something this sensitive. I told him I am GAY to his face. He was speechless. At first he thought I was joking, and I was lying and so he laughed at it and tried to reconfirm that with me several times. But upon my same answer, he got upset and worried. While he was explaining why it is wrong and why I should not follow this path, I saw tears rolling down his eyes. I could feel his fear and pain, but I was helpless and it was important for me to make him realize how real and true this bitter fact is. He kept on asking me if there is anyway I could change myself, how I will tell our parents, what will our society says. We had a big argument for an hour. I tried to persuade him how normal and natural it is to be gay and how my life has always been like this since my boyhood. But he was not ready to accept it. He was very scared and concerned about our family reputation in the society (with our relatives) where we have been living for generations. He found it shameful. And it was very painful for me. He was fully aware about the existence of gays and lesbians, but since it was the case in our own family, he was resentful and reluctant to accept my sexuality. He was confused if he is to call me brother or sister (now) or if I was a hijra. His opinion through this conversation exhibit how unaware our society (even educated one like my brother) is with the diverse identities of LGBTI community. And this was not the first time I was asked that question. Like many others in our society, he thought that being gay means cross-dressing and having a transgender identity. I can’t blame him…it’s our societal stereotypes to be blamed. Upon my constant assurance, he was not ready to accept and said he does not want to talk about it. Since that evening, we have not talked about it. I hope with time, he will be able to accept my true self. But I am glad I told him…at least I do not fear anything now.

If only I knew being me (accepting oneself) could bring this much of liberation in life then, I would not have wasted my yesteryears (especially my teen years). Never mind, better late than never. Now, looking back all those years, I just hope and wish that young people would not have to go through all these mental hassles coming out; that it should not be a bigger deal and coming out will be an easy process. And with Nepal’s new constitution 2015 that has positive provision of equality and social justice for sexual and gender minorities like me, I hope people/society’s perception and attitude towards LGBTI individuals will change (including my brothers’). I hope my state will be able to adopt and translate its law into practice at society level to end prejudices and misconceptions towards LGBTI individuals.