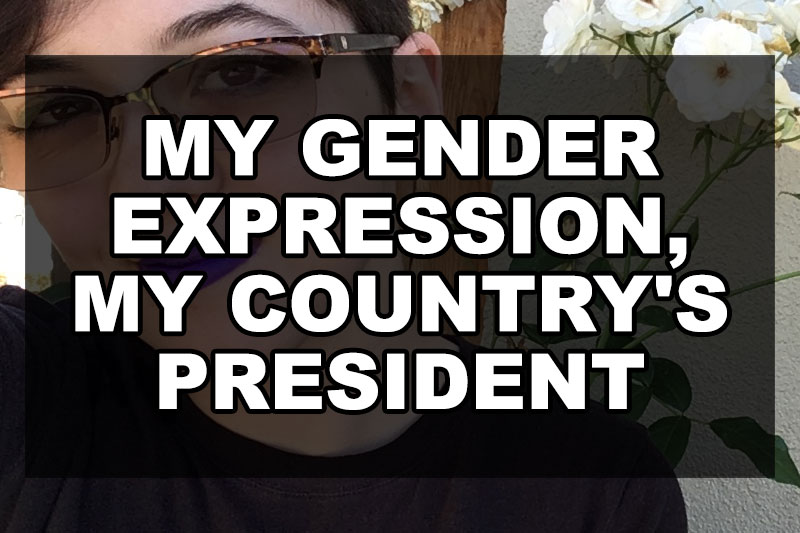 Editor’s Note: The following submission is from Alex Brown. Have an LGBTQ+ related experience or story to share? Having your article published on this site will automatically enrol you into a raffle to win a $50 Amazon Gift Card. Submit an article today via queerdeermedia.com.

[amazon_link asins=’B072K6YMD5′ template=’ProductAdRight’ store=’ourqueerstories-20′ marketplace=’US’ link_id=’0fac9bf1-8c97-11e7-a2af-4ba3714180bd’]I have begun to shed my femininity again. It always begins with my hair. The act of cutting my own hair comes too easily — the scissors are right there, sharp and waiting. It took me months to return to this point. I told myself I’d get my hair cut by a professional at an actual salon (my mom’s preference, for sure) once I moved back to California for the summer, and that I’d just have to deal with the shoulder length curls — my definition of long hair — until then.

I was extremely grateful to be in such a like-minded and understanding community at my college, but I didn’t want to present as butch after Trump got elected. A wide array of gender presentations across the spectrum is visible among the student body, staff, and faculty, and I have always felt safe and affirmed there; it was traveling outside the community that I was concerned about. What would happen to me on the train, on the way home from a party or a concert, or on the walk home from the pharmacy?
One of the most frustrating things I’ve felt since the beginning of the 2016 Presidential campaign is that everything is about Trump, even when it isn’t. There is solidarity and empathy, yes, which are beautiful, but they are there for a reason that never leaves our mind, always lurking, insidious.

I went to my favorite ice cream shop in spring of 2017, and saw that they have free stickers near the cash register. Some just feature the logo of the shop, but one, the one I peeled off the roll of paper and still display on my laptop, says YOU BELONG HERE in colorful letters. A welcoming and wonderful message, but would it have been printed in 2014? 2015? In some ways, this inclusion feels painful, because it is a reminder that we are constantly fighting back. Constantly resisting.

I sometimes dwell on memories of the day after the election, that cold gray morning of November 9th, when large groups of students, reeling in mixed feelings of pain, shock, anger, and exhaustion, gathered out in our college’s iconic gazebo and talked about emotions, about the future, and comforted each other while we cried. We lamented our majors and classes, asked ourselves why we didn’t study Political Science instead of Art or English, these subjects that all of a sudden seemed useless in the grand scheme of things.

One night in March I went to an on-campus event called “Out @ Work,” a support-group style discussion that allowed alumnae and other community members to talk to students about their experience being LGBTQ+ in the workplace. There’s a general agreement that the culture of our school, while wonderful, is admittedly a ‘bubble’ that one must leave during graduation, and being thrust into the ‘real world’ can be shocking. The mentors at the discussion made impactful points about not censoring yourself for the comfort of someone else, how the act of your appearance making someone uncomfortable can be a beautiful and radical act. They put an empowering spin on my fears of being in danger.

My mom tells me that eventually I’ll grow out of worrying so much about what others think of me, which is normal advice for any young adult, but particularly significant to a young lesbian. Being comfortable with expressing one’s gender in a particular way is just another part of growing up for LGBTQ teens and young adults, and even in these uncertain and sometimes dangerous times, I can feel it getting a little easier.

In April, I attended a drag show put on by my college’s pride club with my friends. It was hosted by a drag queen who is pretty well-known in the Atlanta queer scene, Taylor Alxandr. They towered above the audience onstage, got the crowd excited with jokes and rounds of cheers, and then the shows began: students and even some staff dancing and lipsyncing, costumed, painted, happy, and free. The show was housed in one of the oldest buildings of the college, its columns and high ceilings calling to mind the proper young girls who once learned there, how some of them must have kept certain secrets, and here we were, in 2017, laughing and clapping and dancing and tipping dollar bills and kissing and touching hands to hands and hands to bodies, alive and unafraid. No administration is more powerful than our love or our joy.

When the show ended, it was raining, and I walked back to my dorm letting the sky soak me. When I reached my room, I saw, in my mirror, my long strands of hair dripping and clinging to my face and shoulders. I felt ready. I knelt on the floor and raised my scissors. I cut.