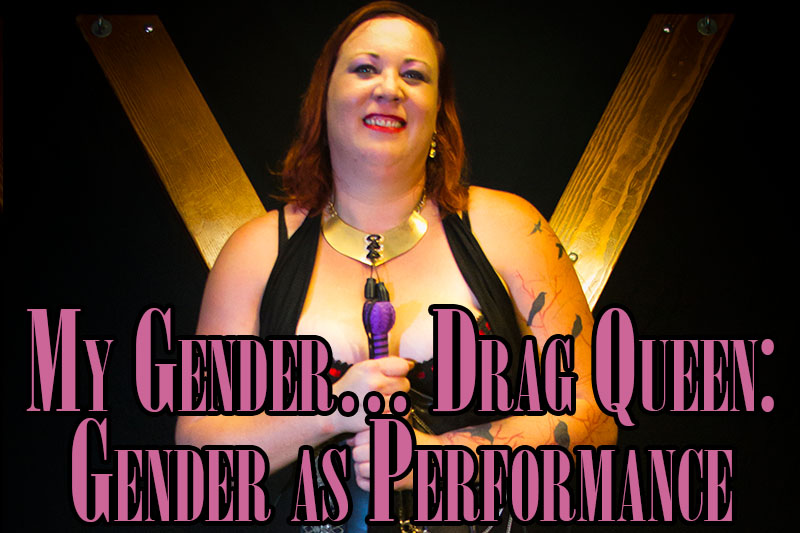 Editor’s Note: The following submission is from Rebecca E. Blanton (aka Auntie Vice). Have an LGBTQ+ related experience or story to share? Having your article published on this site will automatically enrol you into a raffle to win a $50 Amazon Gift Card. Submit an article today via queerdeermedia.com.

[amazon_link asins=’B073CDR1GK’ template=’ProductAdRight’ store=’ourqueerstories-20′ marketplace=’US’ link_id=’84810cce-8cad-11e7-8111-718528bba2a2′] I am all woman. Well, at least to the outside world, those who don’t know me, I appear to be all woman. I am six feet tall, a 35 inch inseam, have DD breasts, ample hips, a soft jaw line, long hair and I don’t shy away from dresses and make-up. In fact, I embrace the feminine on stage. I perform as a burlesque dancer and stand-up comic. I don corsets and stilettos and false lashes and glitter and sometimes then take it all off except for pasties and a thong. So, to the world I am all woman.
For me, well, I don’t “feel” like a woman. In fact, the DDs and the ability to skip in five inch stilettos just means I know how to work a great set of props. Just as my heels, my lashes and my tear-away panties are props, so are my breasts, my hips, my vagina and my soft jaw line. I have about as much attachment to the props I grew myself as the ones I picked up at a costume store.
I consider myself agendered. I feel no connection to being a “woman.” I have no desire to be a “man.” I simply don’t care about gender. The only gender statement that has ever really resonated with me is one from RuPaul that, “We are born naked. Everything else is drag.” And sweet child, I am one hell of a fishy queen.
The first time I recall being conscious of gender was when I was six. I was in the first grade in a small country grade school in southeast Idaho. The class was doing a play about the Founding Fathers. Because the play was written in the traditional American way, there were very few “girl” parts. My teacher took me into the hall when the other kids had a “free read” and told me that because there were no “girl” parts I needed to play George Washington. Her tone told me that I should be embarrassed or sad about this. For me, it meant I got to play THE Founding Father in the play. I wasn’t phased.
I played Luke Skywalker when the kids in grade school re-enacted Star Wars. I asked for piano lessons so I could eventually join Liberace on tour as his side kick. I learned to fix things, sew, climb trees, fish, and cook. Gender “appropriateness” never crossed my mind. I found most gendered play boring anyway. When the other girls played “house” I was the husband that went to work and held committee meetings with my stuffed toys. (Hand to god, I wrote agendas in crayon.)
By the time I was in college, I understood the power of “high femme.” All decked out in make-up, push-up bras, heels and short skirts meant I drank for free, was never bothered about my horrible fake ID, and that big eyes and a pout had more power than just about anything. I learned that wearing a choker, short hair and jeans made people think I was a drag queen. More than once, a queen herself grabbed my chest with an exclamation of, “Wow! Those are fabulous!… Shit! Those are real!” To me, if I was passing as a queen with amazing padding I was all happy. I mean, that is a big compliment!
When I got into my career, I found wearing a pencil skirt, high-necked blouse, stilettos and my hair in a twist meant I could control a class of 500 or a legislative hearing. There was power in the “high femme” meets “dominatrix.” I never had to be the most versed person in the room to have what I said believed more than anyone else, as long as I was dolled up. I used this to my advantage as a researcher and head of a state agency. It became so much of a part of my image that people realized I was very ill when I stopped wearing high heels to work every day.
I have been equally comfortable in male spaces. With short hair, no make-up and baggy clothing, I can pass for a man. I am comfortable with groups of just men. They are also comfortable with me. At the local male leather bar, there is a second of, “Someone with tits just entered” awareness followed by the “Oh, that’s Bec. Nevermined,” and not a further thought of including me in the festivities. The other women I know who have been to the same bar report feeling like an outsider.
In my twenties, I spent a couple of years exploring the idea that I might be trans. I didn’t feel like a woman and some days I just wanted to put my breasts on the shelf and be done with them. Ultimately I realized I didn’t really want any permanent gender. I just wanted to be.
Now, in my 40s, I am heavier. My breasts are pronounced as are my hips so I know to the world I am a “she.” And that is fine. Gender pronouns don’t bother me. When I have been called “Sir” and “he” the people doing it feel awkward. I never have. It is easier to move through the world accepting the feminine pronouns and not explaining myself constantly. I would hope that in a generation or two we will have gender neutral pronouns widely adopted and people like me won’t have to choose or feel like they are “hiding” when we don’t explain to every passer-by why “she” is not really right for us. For now, I have other more important fights to fight.
I am who I am. To me, that is simple. To the world, well, I am what they want to see.