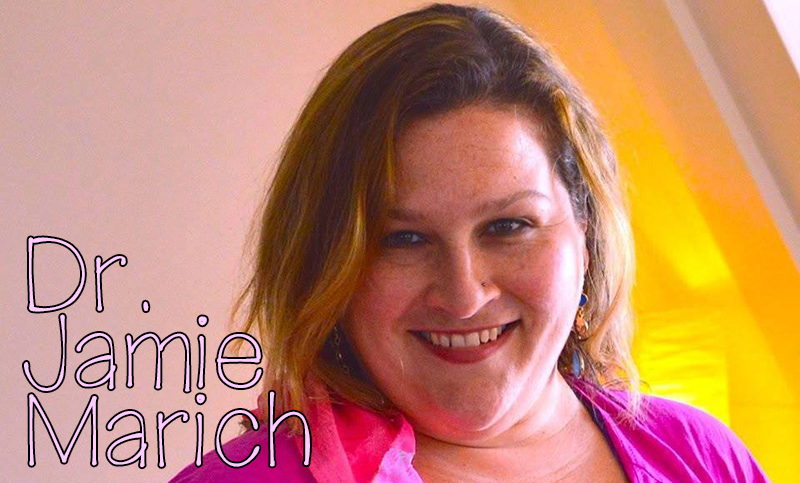 Editor’s Note: The following submission is from Dr. Jamie Marich. Have an LGBTQ+ related experience or story to share? Having your article published on this site will automatically enrol you into a raffle to win a $50 Amazon Gift Card. Submit an article today via queerdeermedia.com.

[amazon_link asins=’B072BW61ZH’ template=’ProductAdRight’ store=’ourqueerstories-20′ marketplace=’US’ link_id=’814a51d6-8cda-11e7-9d36-f1fdbe721af4′]In my travels across the country to offer workshops, I sometimes fear how audiences in the red states receive my work. I grew up in a very conservative household, politically and religiously. In my teens and early twenties, I hoisted the flag of several conservative causes and voted Republican a few times, all because my religious upbringing dictated as such. I received plenty of exposure to what the Rush Limbaughs and Bill O’Reillys of the world think of someone like me, a bisexual mental health professional who advocates for the importance of trauma-informed care as a societal best practice. When the State of Indiana passed the Religious Freedom Restoration Act in March of this year, a visceral reaction overcame me. Of course I found the news upsetting. My Facebook feed blew up with fellow socially progressive friends vowing to “boycott Indiana.” Some of my favorite performers cancelled showed scheduled in the Hoosier state. Friends and colleagues who, like me, are not “famous” yet still travel as part of their work to offer professional trainings, talks, and performances publicly committed to do the same. The organizational committee of an annual conference at Southern Indiana University in Evansville booked me a year ago to be a keynote speaker. For a brief microsecond I entertained the peer pressure I felt to “boycott Indiana” myself. However, my gut instinct affirmed that going to Indiana was the right move because I had a very important message to carry about the vitality of authenticity. As it turned out, I had some important messages to receive on the topic as well.

This conference specifically requested my participation to keynote on an idea even considered too touch-feely amongst many mainstream members of the helping professions—the imperative of the therapeutic relationship (as opposed to theory and technique) as a primary mechanism for change. I believe that authenticity and genuineness are vital in the work that we do in helping others heal, yet so much of this gets overlooked. The conference also offered me a special topics workshop to teach a class in Dancing Mindfulness, a practice I developed that uses organic movement as a primary mechanism for teaching and cultivating present-centered living. Even the conference organizer said, “I don’t know how many people will be interested in the dance thing, but we’ll give it a try.” It is a true gift for me to be able to present both this talk and this special workshop at the same conference. Many organizers prefer the more technical content that I offer in workshops, yet Indiana wanted the true essence of who I am as a person and as a professional. How could I pass that up?

On Day 1 of the conference, I attended a lecture with Dr. Robert Ackerman, an authority on both children of alcoholics and dysfunctional families. His classic, Perfect Daughters, remains one of the most personally transformative books I’ve ever read. I’d attended lectures with Dr. Ackerman before, yet this particular talk, brought me to tears. Rolling, vigorous tears. As Dr. Ackerman addressed the fundamentals of dysfunctional family systems, I took pause and asked—What was it about this particular talk that hit me so hard? After several breaths the answer came—His challenge to live a fully authentic life illuminated everything I’ve been working on in the past several years of my own recovery journey. He shared, “You cannot expect yourself to become a fully functioning individual (physically, emotionally, spiritually) if you deny a part of yourself. The key is integrating all of who you are.”

Hearing this challenge validated my decision I made several months ago to truly, fully come out as bisexual. I’ve known that I was attracted to both males and females since early adolescence, yet it was something I decided to never broadcast publicly. As fearless as I may come across to some people, the fear of fully coming out proved crippling. Fear of rejection and fear of being irreparably shamed by the conservative family and friends that I love blocked me, stifled me, and kept me trapped in my own life. Yes, I acted on attractions to both sexes over the years. Friends, colleagues, and partners that really knew me were privy to the truth. It dawned on me at some point that because I am happily married to a man, I could conceivably go my whole life without really having to tell the rest of my family. However, I also realized that hiding out in this way would not be honest and ultimately not healthy in my growth as a person. I heard Dr. Ackerman’s challenge in Indiana during the midst of a complicated series of coming out conversations with conservative family members and friends. And it was in Indiana, of all places, that I received confirmation that I was doing the right thing.

The rest of the conference was splendid. My keynote presentation and dance class were well received, and the people that I met were gracious and appreciative. We engaged in powerful conversations about getting back to the basics of human interaction as professional healers. A special highlight for me was getting to lead a group of twenty attendees in meditative dance. Dancing Mindfulness uses all genres of music to help people cultivate being in the moment with their dance. Prior to the conference, I made the editorial decision to insert Lady Gaga’s anthem Born This Way into my playlist. The people dancing with me moved with such joy and abandon from the first few bars all the way to the end, singing along and moving without judgment. As I sang and danced this now-familiar song with those who came to the session, I finally owned the line “Don’t hide yourself in regret, just love yourself and you’re set, I’m on the right track, baby, I was born this way”. Thank you, Indiana.

The following submission was also submitted the Addiction Professional and NALGAP and was reproduced with the permission of both.