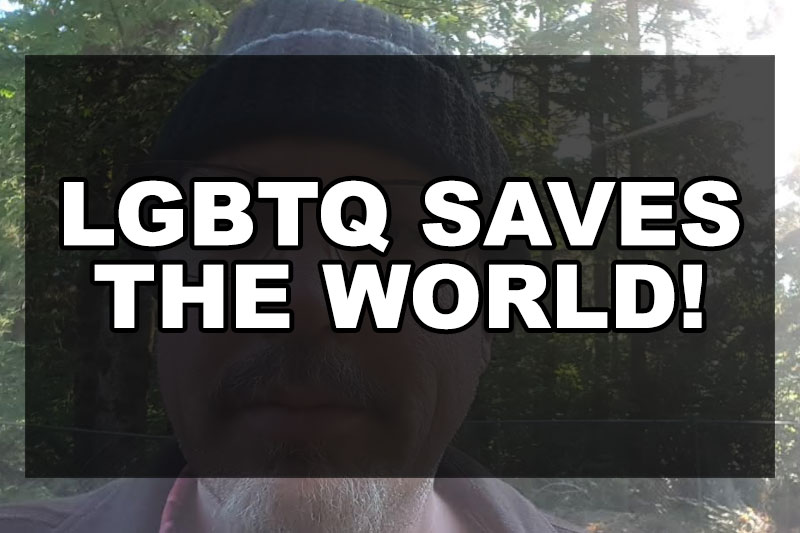 Editor’s Note: The following submission is from Eddie Kedge. Have an LGBTQ+ related experience or story to share? Having your article published on this site will automatically enrol you into a raffle to win a $50 Amazon Gift Card. Submit an article today via queerdeermedia.com.

I view the world through a prism of deprivations and abuses. It’s a perineal outsider’s mentality. Admittedly, this is a distorted way to see things but that’s how this old telescope was made. When I was seven a man plucked me off the street and shoved me into his car, then drove me to a remote place and sexually assaulted me. He left me for dead on the side of the road. This story really isn’t about that experience, it’s about a gay bar in downtown Portland, and I promise, I’ll get there. But first, I’ll need to explain how confused and alienated I was at an early age. I blamed myself for my problems—that’s what kids do. Plus, my parents were all too happy to thrust blame, as well.

“Eddie, don’t tell,” my mother said the night they found me.

I’ve run across a lot of gay and bi and trans people in the sexual abuse survivors community and I’ve got a theory on why that might be, this seemingly high number. (I say might because there’s very little research.) A young person who’s struggling with the alienating burdens that come with the unique LGBTQ identity carries a weight that predators will read as weakness, and seek to exploit. Of course, this isn’t a rule, and obviously there’re LGBTQ kids who grow up abuse-free, in supportive homes. My friend Jeremy is one. Those of us who didn’t get that support will inevitably absorb some of this disdain from the outside world and focus it inward. I sure did.

For me, it started back in 1980. At the time the Gay Pride movement was gaining momentum, as was environmentalism. My parents had joined a civic group, working with a man named Robert Gentry and his partner on fledgling conservation issues. Bob was the first (openly) gay mayor of our town. His partner, Gary, would be our first friend to die because of the AIDS virus. Gary wasn’t simply loved. People absolutely adored him. When I was a little kid I looked forward to going over to their house because the man was so captivatingly funny. Unforgettable, really. These proud gay men were leading our town in a positive direction and that’s why it was confusing when the boys at school would call me fag and homo and act like being gay was bad.

I confess, exposure to the bigotry changed me. Sadly, I began to conform as a teen, hurling homophobic slurs at times. It was part of an escalation that went from jerk to asshole to fag. But there was one kid I never dared insult because I looked up to him. Santiago (Santi) was an openly gay high school student in 1987, one year my senior. I thought he was the toughest, bravest guy at school. He works at a bondage leather shop in SF now.

In my late teens I started wishing I was gay. Wishing because females were obtuse and unapproachable. Other guys, I understood. So, now the cat’s out of the bag. It’s shameful—a cis male writing for Our Queer Stories who doesn’t currently self-identify as L,G,B, T, or Q.
To be sure, I’ve thought a lot about sex with men. But I realize it’s primarily a reenactment of my early victimization, the rearrangement of trauma into self-empowerment, one where I voluntarily participate in sex acts. Maybe someday I’ll live the fantasy, but I suspect it’ll be more therapy than a true expression of sexuality. I digress, 500 words later and there’s still no mention of gay bars in Portland. WTF?

Last year I was in PDX for a writer’s workshop with the incomparable Lidia Yuknavich. After workshop, I hit some bars downtown. Breweries, sports pubs, blah, blah straights are so boring! Near Sizzle Pie and the Ace Hotel sits a joint called Scandals. I walked over and realized instantly it was a gay bar. So I went inside and had a few stiff drinks on the cheap. A vacationing sugar-daddy and his stripper girlfriend came inside but only stayed for one round. They saw the blacked-out windows and the name on the sign and figured the place for a titty bar. There were only three boobs in the place. The two on the stripper and me. Ba-da-bing! A regular told me that in the 1980s the whole block was filled with gay bars, but now this one and another were the only two left in Portland.

“That’s too bad,” I said, thinking of the Duplex in Greenwich Village and how fucking awesome that place is.

“Not necessarily,” he said. “Gay bars existed because we couldn’t go anywhere else. And gays had to hide being gay. It’s why every place blacked-out all its windows.” He motioned to the painted-over window front and I nodded. “But now we don’t have to hide inside gay bars, we’re accepted almost anywhere.”

The sun sets late in the Pacific Northwest and so I went to the patio in front of Scandals to absorb the last drops of twilight. I was out and proud to have found one of the last few gay bars in the city. A landmark. Some of the boys on the patio were going to Uber over to the other place. More of a hook-up bar, they said. A meat market. They asked if I wanted to come along. But in the words of Augusten Burroughs, I knew they’d ridicule me and tell me to come back when I had pecs. As the evening grew late, and as I sat enjoying the cool air on the street, I realized I’d surprised myself by staying as long as I had. It was too much fun at the gay bar.

I thought about Bob and Gary and my current group of LGBTQ friends. I thought of the trans woman I worked with in Seattle and how amazing and strong and honest and humble she was. How hard must her life be? Still she wasn’t safe. I thought of the community leadership, realizing for the first time how influential different members of the LGBTQ community have been to my life. I relaxed into my patio chair. I was the perineal outsider and felt accepted here. It felt like home. As I reflected upon what began as the Gay Pride movement, I thought about the two core values for LGBTQ: acceptance of self and acceptance of others. Then I understood this example is the one we must all spread if we’re ever going to save this world.