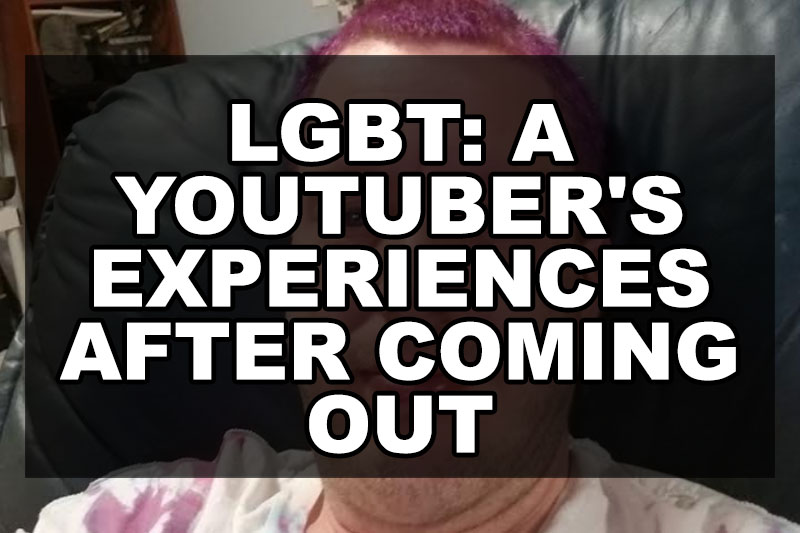 Editor’s Note: The following submission is from John Erik Madsen. Have an LGBTQ+ related experience or story to share? Having your article published on this site will automatically enrol you into a raffle to win a $50 Amazon Gift Card. Submit an article today via queerdeermedia.com.

Whats it like being a Furry A Gaymer (or gay video gamer Gaymer for short) on youtube.

My answer is not a easy one nor a grand one like most people think I am sure you have all read the adventures of love loss and coming out here on this site.

But that’s only a part of me.

Greetings my name is john erik madsen.
on youtube i am known as. why so fluffy my video blog on my experiances of coming out and trying to move on and also as john Dingo-fox/Zuit suit bunny.

my Youtube experiance on googles services have been terrible. But yet i move on and keep doing what i love as of lately youtube has become a place where gay trans and even bisexual Youtubers are being attacked there content stolen and remixed to say horrible things and used to poke fun at people of the LGBT community.

But you wonder i thought google cared about the LGBT community every pride event they produce a video supporting LGBT Youth and communities.

Well yes they do when its in there best interests to attract new people to the service and to look good in the media but the truth is more horrible.

see my channel has had to go under some changes after being out and proud on youtube i did 2 national coming out day videos both where attacked and remixed to make them appear funny because my head tilting issues because of my disabilities that i cannot control.

The attackers are usually 2 trolls there’s now three i ignore them and keep on moving. doing my channel what i love to do game and talk to people and not for money like most furries do i dont want people to donate to my channel i give them the option to choose to donate which resulted in a amazing bunch of new subscribers to my channel .

i don’t force donation i have a patreon and even my amazon wish list on one of my videos and told people hey you want to donate you can you dont have to if you dont want to.

i Was happy my channel was expanding my content improving i even took a stance on a story that attacked transgender people calling them little. for people that dont understand the term little is used to discribe someone in a kink relationship where the person age plays as a 8 yr old little girl to have intercourse with a older man not transgender they posted the story as a transgender man which this person is not. so i corrected them in the video i produced standing up for the rights of others.

all was going great in 2017 i hit viral video status with FNAF at sakuracon 2017 it stands at 14 million views and continues to rise every day im glad i could show the world the beautiful side of cosplayers and there costumes and the characters they play.

then the first attack happened.

A youtuber by the name of marty huggins a real low life decided to steal my videos and remix them to say horrible things.

this video was my video remixed to say i would love to blow BBC and get my rear rimmed by a donkey. (Look up BBC in the dictionary and choose the adult entertainment version of the meaning)

i blocked the user and he kept on sending me even more threats wanting access to my dance videos to poke even more fun at me sending me e-mails come on john work with me you bastered im only trying to show the world your a ball sucking faggot.

i reported him again to youtube and this time to googles services see when marty couldnt post the videos to googles youtube services he uploaded the videos back into google + to avoid having the videos pulled then he decided to attack me there and google did nothing.

it got so bad i had to report google for failing to uphold the cyberbullying laws that are here where i live at where google happens to reside even.

finally i got my wish and google removed the user and the videos disabling the channel.

But all was not well and things got worse and youtube failed again and this attack was live and on a live stream of minecraft which is on my channel john Dingo-fox/zuit suit bunny. i tell people to find me to look up feels like christmas furry style to find me.

most do. most dont.

but i move on or try to in most cases but the latest attack was horrible with a huge list of hate. not only towards me but directed at me.

Here are some excerts from this attack.

“this manhole video had been curculated across several homo sites”

if i posted the whole thing here i would have to censor almost 90% of it.

i was about to quit and do my last stream and shut down my channel little did i know i had friends and subscribers helping me out after the attack behind the scenes.

My friends from the local furry community and on my facebook decided to stand by my side and help me remove this offensive account again.

google+ was taken down but the new youtube account for the troll entitled mr patatohead designed to poke fun at me was left active because once the attack is over they delete the content from there channel just as fast as it was uploaded and change out the videos not to get caught. and this is exactly what he did. the channel has no content on it that he has uploaded because its a troll account trolls gay bash and attack users and dont get suspended on youtubes services because as long as the account has a favorites list the account remains active.

Which leads to more attacks but i move on i keep doing what i love my channel recently hit 40,000 subscribers

and i keep moving forward i started a new page on facebook called LGBTS Everyone because the last group i was a part of said oh we are a lgbt group but you cant post pictures here or talk about your experiances.

not what i wanted so i started a page where everyone belongs. and your wondering the s its for straight because sometimes are straight allies are what gets us through.

i learned this after the live stream attack when a fellow youtuber Sherbert of Sherbert shenanigans helped me out and so many others from youtube and even my twitter.
and no sherbert is not gay. but a wonderful straight furry with a great wife and wonderful child there videos are warm hearted and beautiful and i owe him for what he has helped me with.

After all of this am i ok honestly im scared i havent posted to why so fluffy because of a recent ban attack on my channel.

i woke up to a e-mail telling me my LGBT Short film playlist was blocked and banned for offensive content.

i was mad as hell i was angry that youtube would discriminate like that so i fought back.

Why does fighting back not help LGBT Channels on Youtube. because if your LGBT and they find your channel in the wrong you will get your channel removed forever.

“yea google supports us all right”

No warning just poof and its gone everything you have worked for gone.

I Sent them a e-mail.

Please explain how a short film list of LGBT films can be blocked on my channel when they are short films that are already on youtube and everyone can see across your service.

i finally got a e-mail back when they noticed they made a mistake wow they actually helped once for a change.

this lead me to fear about continuing why so fluffy
but i am now getting ready to start again.

i dont let the haters stop me and i keep on going.

i had the great honor of being able to send a wonderful package of candys recently to a furry youtuber odin wolf he made such a great video entitled trying russian candys in fursuit.

it was such a honor to have him recognize me he didnt have to but i was glad someone did.

its not easy being a gay youtuber but i wouldnt change a thing.