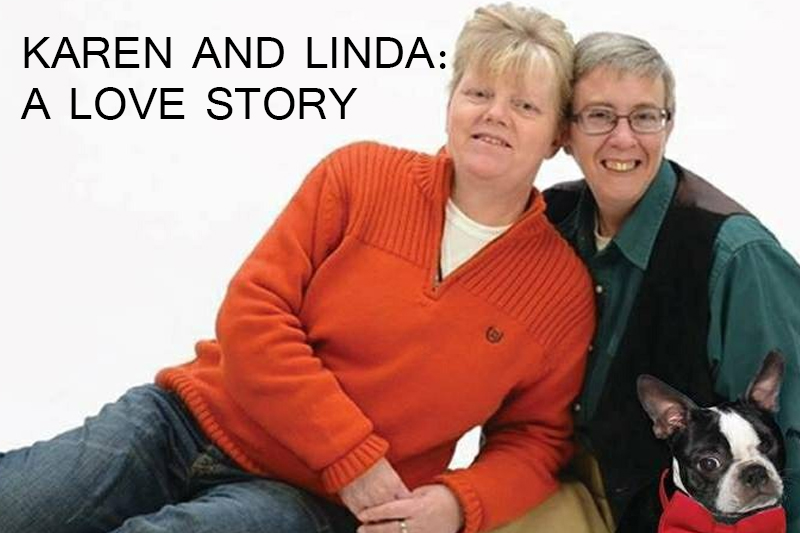 Editor’s Note: The following submission is from Linda J. Nicholson. Have an LGBTQ+ related experience or story to share? Having your article published on this site will automatically enrol you into a raffle to win a $50 Amazon Gift Card. Submit an article today via queerdeermedia.com.

I am a woodworker making small boxes and pens. I would take left over pieces of wood and make necklaces out of them and sell them on Facebook. Karen liked one of them and purchased it from me. We began chatting then Skyping for the next 2 1/2 months. In October I set out on a 7 1/2 hour drive to finally meet her in person. We spent 2 fantastic weeks together getting to know each other.

For the next 3 years I would travel to the U.S. to see her on average every other month as I could only spend so much time in the U.S. We got married in Maryland in March of 2013, but have never had a honeymoon. Every time I would set off for the States, I was filled with excitement to see the love of my life. I had waited half my life to find “the one”. In 2011 we rescued a Boston Terrier with only one eye who was destined to be killed by his owners. We named him “One-Eyed Willy” after the pirate in the movie The Goonies.

In June of 2012, I had just arrived at Karen’s after driving half the night. Karen took Willy out for a walk and never came back. Suddenly I heard my cell phone ringing. It was a neighbour where she used to live. Karen was in the local hospital, ready to be air-lifted to a trauma centre. It turns out she had had a heart attack. For the next week I would drive an hour to the trauma centre to visit with her before returning to her apartment to look after Willy. Finally she was released and I brought her home. Willy would not leave her side except when I took him out for a walk. When I returned to Canada when Karen was well enough, I took Willy with me as Karen was unable to look after him. Every time we came for a visit, Willy would go crazy to see his Mommy.

We spent 6 months living together from November 2013-April 2014, when I had to come back to Canada. I found an apartment for us to live in in Chatham, Ontario. In May, I went back to the U.S. to pack up all our belongings to move Karen to Canada with me. Unfortunately, due to something that happened over 30 years ago, she was denied entry into Canada. I was sitting in my truck on the Canadian side waiting for her call, and when she told me she was denied entry I broke down. All I could do was go to the apartment with our dog Willy and cry.

We have been working with lawyers for over a year trying to get things straightened out so she can at least visit me but we are still waiting 16 months later.

During the past 16 months, we have only been able to see each other 5 times, for a month or less each time as I can no longer afford to travel back and forth as I used to.

Since arriving in Chatham I have applied for over 300 jobs to no avail as the job market is almost non-existent since the Recession of 2008.

I cannot sponsor Karen to come to Canada as the government would consider her a “drain on the health system”, so I need to get a Green Card to be able to live and work legally in the United States. We have reached out to everyone we know in hopes that someone would be willing to Joint-Sponsor me for a Green Card, but no one either meets the criteria or is willing to do so. I have spoken to an American Immigration lawyer and was informed that there is another way, but we need to come up with $40,000 U.S. With Karen on disability and myself without a job, it has been impossible to save any money towards these expenses. Between my living expenses in Canada, and Karen’s in the U.S. money is extremely tight.

A year and a half ago, we imagined being together and having a place we could call home. Instead we are separated by 4 1/2 hours and an international border. Even though we Skype on a regular basis, it does not hold a candle to being able to hold her in my arms, go exploring with her, just being with her.

This whole ordeal has taken a huge toll on both of us, physically, mentally and emotionally. I figure I have aged more than 5 years in the last year and a half. I have gone from partially gray hair to completely gray in a very short time. The strain of being apart is too much to bear at times. If it weren’t for Willy our dog, some days I would not even get out of bed, I feel so defeated and overwhelmed. We just want to spend the rest of our lives together as a couple as we vowed to in our wedding vows.