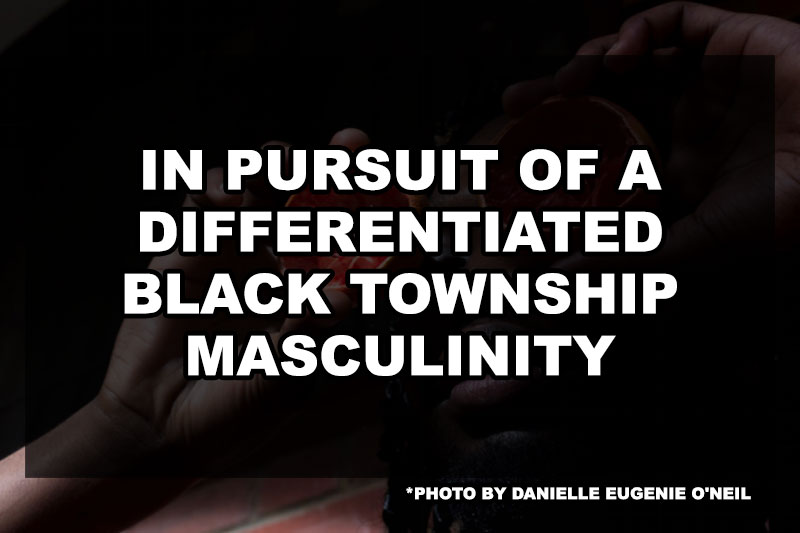 Editor’s Note: The following submission is from Kamogelo Molobye . Have an LGBTQ+ related experience or story to share? Having your article published on this site will automatically enrol you into a raffle to win a $50 Amazon Gift Card. Submit an article today via queerdeermedia.com.

[amazon_link asins=’B075QCY3CW’ template=’ProductAdRight’ store=’ourqueerstories-20′ marketplace=’US’ link_id=’8623abf8-bf46-11e7-9c4f-dbff6ac39d00′]To be young, black, queer, and from a township in South Africa is difficult. I am not saying this from a place of assuming a single-story knowing of others’ experiences, or seeking to invalidate the hardships of those who did not grow up in townships. I say this from particular and personal lived experiences of having grown up in Soweto, Meadowlands, and lived most of my life there. Furthermore, as a young black queer man from a township seeking to recover, locate, understand and place myself – my blackness, maleness, masculine performativity, and queerness (particular to my environment) – I have come to be met with numerous frustrations and incomplete representations of what it is to be “black, male, and from a township”.

To be clear although I am a black queer man from a township my difficulties with being from a township space is not with the growing lack of acceptance with queerness (which is an issue that transcends township spaces). It is with the narrow definitions and identifications of what it means to be black, male, and from a township – a kind of “township aesthetic”. It is with the manner in which black township masculinities exist within an essentialised supposed ‘thug’ masculine performativity that is still perceived to be the norm for all males from a township. This said aesthetic seems to not provide paths to navigate one out of such definitions or to introduce new forms of being and belonging.

Historically, the township was constructed as a space of containment for black people. It served the purpose to operate as a space that would place black people in a state of ‘othering’ through discreetly segregating low and middle class black people in a state of perpetual disadvantage. The result of this constructed-ness of the township is the creation of a space where there is a deeply interlaced notion of a sense of belongingness and of numerous cultural, social, economic and sexual identities.[ Ellapen, Jordache. 2007. Locating Blackness: The ‘Township Aesthetic’ and Representations of Black Identity in Contemporary South African Cinema. Pg. 48] As such, it is important to understand that notions of social, cultural, economic and sexual identities are profoundly impacted by notions of space. That said I began to be interested in the manner in which the township space articulates – or has articulated unto it – constrained masculine identities. I began to imagine what a pursuit of a differentiated township masculinities would result in broadening the scope of what is perceived to be black, male, and from a township.

Living in a township has revealed to me the fixities of identities that are supported by stereotypes of what it means to be from a township, and how these fixities are perpetuated to maintain the position of ‘other’. These range from the expectation that: 1) people should speak with a township ‘ghetto’ accent when speaking English (whatever that means); 2) the expectation to wear Dikkies and All Star sneakers while rocking low hanging jeans; and 3) that one should have a slight swaggered thuggish bounce in their step when they walk. All these, along with many unmentioned others; denote a constructed-ness of race and masculine performativity that goes uncontested.

This masculinisation of the black male seems to be a defining image of township masculinity. The men that have surrounded me throughout my life have had an impenetrable stature about them that gave no way to demonstrate other ways of being (however way we perceive the demonstration of that). This imaging and representation of “township masculinity” became more heightened through film and television. These mediums had long been representing this image of the homogenous ideal black township masculine body through shows such as Yizo Yizo and Gazlam, and movies such as Yesterday, Tsotsi and Jerusalema.[ Ellapen, Jordache. 2007. Locating Blackness: The ‘Township Aesthetic’ and Representations of Black Identity in Contemporary South African Cinema. Pg. 61] The men in these television shows and movies, who also originated from township spaces, always being portrayed as thuggish figures. They chew on matchsticks, embody a ‘thuggish manly’ bounce to their walk, and accessorised with a gun or okapi (pocket knife) tightly strapped to their waist ready to cause corruption, disruption and violence to any space they occupied.

bell hooks writes in her book ‘We Real Cool: Black Men and Masculinity’ that “very few black males dare to ask themselves why they do not rebel against the racist, sexist status quo and invest new ways of thinking about manhood, about what it means to be responsible, about what it means to invest one’s life. Often black males are unable to think creatively about their lives because of their uncritical acceptance of narrow life-scripts shaped by patriarchal thinking.”[ hooks, bell. 2004. We Real Cool: Black Men and Masculinity. Routledge: New York Pg. 80]

The perpetuated aesthetic of township masculinity continues to stereotype, undermine, and reduce the black male to his supposed violent demeanour – acquired through scripts of what it means to be black, male, and from a township.
In thinking of how to pursue differentiated township masculinity it is important to seek and show men that embrace other ways of being that are outside of the stereotyped township masculinisation. Male bodies that imagine and image themselves differently – be it through fashion, music, the walk they embody, varied sexual orientation and performativity, speech they utter, or company they keep.