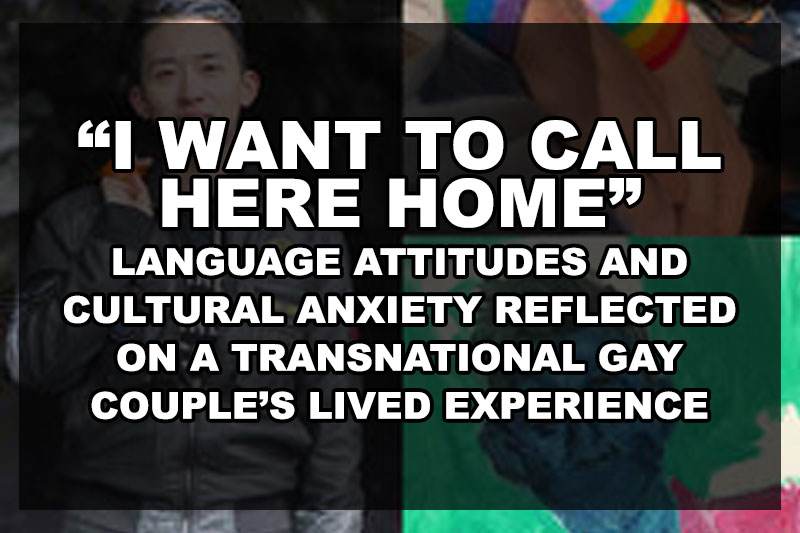 Editor’s Note: The following submission is from Yih Ren. Have an LGBTQ+ related experience or story to share? Having your article published on this site will automatically enrol you into a raffle to win a $50 Amazon Gift Card. Submit an article today via queerdeermedia.com.

“My home is my home, but my family and the whole society do not like people like me, so I moved here intentionally. Now, I really want to call it here home, cause I like living here and being comfortable with myself” -Sheng Liu

With soaring immigration movements of Asians to the U.S., up to 25.4% of Asian immigrants and Asian Americans have chosen to marry other ethnic groups. Also, a great number of researches and studies has done to discuses dynamics of transnational relationships in the U.S, aiming to address whiteness and English hegemony in their relationship outcomes. However, LGBTQ persons and their “lived experience” have been left out of the circle.

Brian is an artist working in the film industry, and Sheng works in a financial management company with holding a temporary working Visa (both “Brain” and “Sheng” are pseudonyms). They all live in San Francisco, and have been together for over 2 years. Due to disparities on linguistic and cultural backgrounds, and misconceptions they both possess to each other’s culture, two partners, one is from the U.S and the other one is from China but has resided in the U.S., as a couple might hold different opinions on daily language use, cultural acculturation and acceptance in the matter of communicating with each other as well as interacting with the LGBTQ community

Some scholars have pointed out that, compared to same-race couples, interracial couples are less stable in marriage and family due to cultural dissimilarity, different beliefs, and less support from family and friends. On the top of cultural-related gaps, I argue that linguistic differences, LGBTQ cultural manners and family judgments not only contribute to the inconsistence of communication as well as interactions within the LGBT community, but also cause mental stress, depression and some other sorts of negative impacts.

Nonetheless, SF has provided a better environment with positive public attitudes towards interracial and LGBTQ couples, for those in a marginalized relationships, the relationship itself can be a target of stigma and discrimination, which can affect the people and the relationship outcomes. Thus, it is extremely valuable to collect LGBTQ transnational couples’ lived experiences and voices, and have a better understanding of how social factors trigger people’s language attitudes, language shift and cultural assimilation.

Language Use and Language Attitudes

English still holds the prestigious position in day-to-day communications and interactions, and Chinese is desired to acquire by both parties, yet considered unnecessary and non-urgent in Brain and Sheng’s love relationship. One of the greatest socio-linguist, Holmes, concludes that the issue of Language attitudes is not a linguistic issue, more of a social and political issue, which gives us urgency and importance to address existing social inequalities, and examine power dynamics. To put it in another way, languages and dialects do not play favorites among them but different attitudes toward languages/dialects, the use of language and the users of language do exist, and they depend on intersectional reasons like social prejudice, cultural norms and other historical elements.

The conversation with Brain and Sheng has revealed that due to more functions in daily usage, English position is higher than Chinese; also, Standard American English Accent (SAEA) is considered more prestigious than other varieties. For example, Sheng said, “I have been trying so hard to sound more Americans…when I am talking to people I am not close to, I will gather my tongue and lips together for a better accent”. On that note, I argue that for the marginalized partner, to become an insider to American society causes majorly the desire to acquire English and Standard American Accent. Moreover, for both partners, the need for Brain to acquire Chinese is less wanted and needed due to the difficulty to study a second language and its narrow functions in this English speaking society. Tsuda, a genius Japanese scholar, illustrates how “Colonization of the Consciousness” promotes English hegemonic status, and triggers language shift and even language loss. She states:

“The destruction or the deliberate undervaluing of a people’s culture, their art, dances, religions, history, geography, education, orature and literature, and the conscious elevation of the language of the colonizer.”

English hegemonic status not only affects negative language attitude to other language, it also penetrates in our mind, and reinforces homogeneous social norms. Sheng expresses the sensation that many other Asian immigrants have shared throughout the history. Social norms along with its praised values creates social hierarchy, which puts Standard English at the top, European languages in the middle, and Asian and African languages at the bottom. Thus, even though we live in a dig- multi- lossic society, many people still hold the monodiglossic ideology, which reinforces stereotypes and discrimination associated with unbiased linguistic features. On the other hand, both Sheng and Brain recognize the benefits of acquiring Chinese for communication purposes but they never really discussed it as a near future agenda.

It is true that “vigorous” and “inclusive” SF LGBTQ culture provides queer people across the nation and even the world with more safety and belonging. However, I argue that its vigorousness and inclusiveness needs more multicultural representation, and cultural sensitivity for people who do not fit the norms. To put it in another way, the conflicts between the mainstream culture and other cultures might lead to cultural anxiety and linguistic anxiety for people who are less familiar with SAE and all references underneath.

Due to the economic growth on male market and mass media influence, Castro as the metaphoric center of SF LGBTQ culture has had some queer persons and peoples, who are not male, white, making a ton of money, don’t speak English, not from the dominant culture and don’t follow gay culture, and don’t look able-bodied enough, feel distant, neglected and even ashamed. As above, SF LGBTQ circle is male-dominated, English ideologies and white culture centralized, which makes new comers and people with different cultural, linguistic backgrounds feel even less engaged, respected and honored. Sheng, as a newcomer and a person growing in a culture emphasizing family values and sacrifices, feels his cultural capitals are constrained.

Despite above, the relationship is indeed bi-directional. The issue of “homeland” and the lack of understanding and support from the remote family also may lead to the disconnection and isolation from the local gay community. For many of those who were born and raised in another country, the feeling of being insecure and “not enough” in this soceity will have a big impact on their cultural identity, language identity and daily interaction in the community. The definition and implication of nationalism confine by Fasold and Fishamn, illustrates that nationality is a social unit that distinguishes from other social groups. Moreover, language embedded in culture, religion and believed values is a major expression and component of nationalism. With “authenticity” being concerned, being able to be a member to American LGBTQ community, speaking English and even SAE becomes a gap for those who lack confidence of communicating with Americans in English. For instance, Brain expressed that “cause he (Sheng) doesn’t watch all the TV shows we like to talk about, and he doesn’t know all the names, memes and American pop culture moments. So I have to explain to him and make sure he is nor board or offended. Sometimes he would get cranky and annoyed”. Also, Sheng expressed his frustration about speaking best English when it comes to communicating with others in and outside the community. For Brain, knowing all those TV shows, popular cultural references and speak the language they all share is a ticket to get engaged and involved in the community. On the other hand, different growing-up environment and different languages have caused anxiety both in a linguistic and cultural level.

Another reason behind Sheng’s desire to acquire SAE is the lack of understanding and support from his family, which results in his initiation of cultural assimilation and language shift. Although In 2001, China removed homosexuality from the official list of mental disorders. However, China lacks legislation in support of same-sex marriages, civil or domestic partnerships. Under the influence of Cultural Revolution and Confucian philosophy, Chinese families fail to accept same-sex relationship consequently.

To see the whole world in a grain of sand, I think a lot of immigrants feel the same way about the “American Dream ”. Sheng is not excluded. The relationship with oneself and the multicultural American society is messy and complicated. Family values, Family education, cultural background, language background, self-identities, status, class, education and more are all deserved to be taken into account in terms of examining language attitude, language shift and cultural assimilation. In Sheng’s case, the mainstream LGBTQ culture with its favored norms has caused disconnection between Sheng and many other marginalized queer people to engage and feel honored. Furthermore, language barriers and different culturally believed values also have made Sheng less close to the mainstream culture, even thought he has shown the desire to be assimilated. For Brain, he is in the favor of the norms so he feels confident and comfortable to interact in the community. Also, he is sensitive to his partner’s cultural expression and aware of the benefits of bilingualism in relationship outcomes.

As above facilitated, we cannot ignore the complicity of social factors, when examining language attitudes, language shift and cultural assimilation. There are a lot more about the language and what the language portraits.

When we discuss language attitudes, the prestige associated with the language is not a linguistic matter, but a social matter. Not only is Standard American English regarded as a ticket to gay community as its language reveals so many cultural references that other communities do not share, but also shows national pride and the “authenticity” of the mainstream culture. We should also notice that the overt prestige of SAE is recognized by non-standard English speakers too as the ability to speak SAE shows the proximity to mainstream social norms.

Language shift and cultural assimilation also go beyond immigration movements and legislation. The desire to acculturation and assimilation linguistically and culturally leads to language shift. The relationship is bi-directional. The monoglossic ideology enforces people to deculturalize themselves; also, their repressed history has an impact on their willingness to learn a new culture with its praised language.