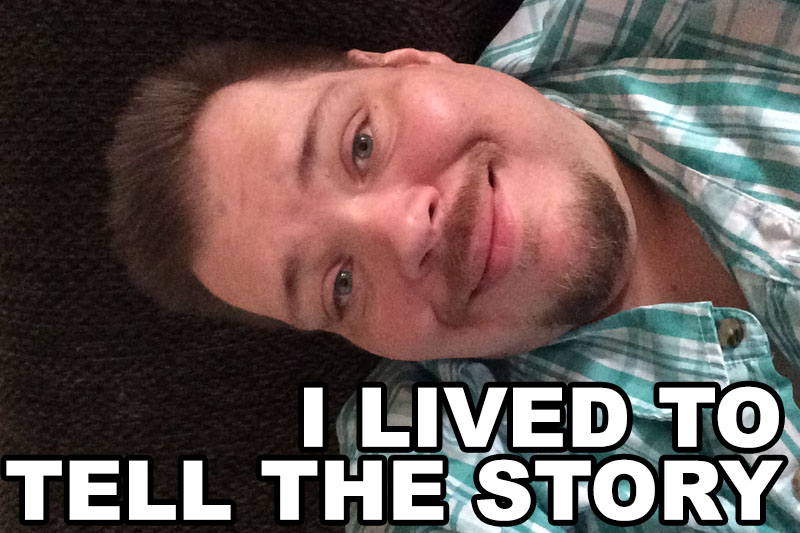 Editor’s Note: The following submission is from Josh Bush. Have an LGBTQ+ related experience or story to share? Having your article published on this site will automatically enrol you into a raffle to win a $50 Amazon Gift Card. Submit an article today via queerdeermedia.com.

[amazon_link asins=’B0721NZT83′ template=’ProductAdRight’ store=’ourqueerstories-20′ marketplace=’US’ link_id=’d04ce395-8cad-11e7-b82a-a72f99d5a1ac’]I’ve known I’m gay since I was 12 years old. I guess my first awareness was, watching of all things Jailhouse Rock With Elvis Presley. I felt dirty, wrong, and immoral. I was raised a man loves a woman, no if, ands, or buts. The area I grew up, was a rural small town, who’s awareness frankly ended at the discovery of electricity. If you weren’t a jock, rich kid, or easy, you were treated like dirt. Here I am 12 years old, fat, loaded with zits, nerdy (which was also frowned upon), my parents were poor, and now this.

To say, I got bullied at school is being nice. There were days, I thought the people in the concentration camps had it easier. By now, my grandmother had died, which left me being raised by an abusive (physical, mental, and emotional- not sexual because in her words I’m too ugly to f–k), and an alcoholic, workaholic father. I just shut down emotionally. I became what I hated, a mildly racist, hateful angry redneck. I dressed the part. Inside my soul was dying, because I was living this lie, just to survive. I began drinking, smoking cigarettes, fighting, everything I hated, but I hid it well.

I graduated high school, with the hopes of leaving this man made hell. I had gotten a scholarship for music production, and performance (I used to play guitar). My mother finding the letter hours before I ran away, she broke my right wrist with a brick, for even attempting to runaway. I gave up, and faced the fact, that I will never leave Upstate New York. I enrolled in the local community college. I started hanging out with actual friends, that embraced me, and my “sin”. I met a wonderful man, he looked like Cam, from Modern Family, except with lighter hair. We began a friendship, that grew into love. With every passing day, my heart grew for him, and his for mine. I told him I’m gay, and he didn’t have to say anything, he let everyone know he was. He wanted me to come out and face the fact with pride. I knew, that if I did, I would be screwed and lose my family. My friends knew, and they never said anything. I just couldn’t come out, even though, it was 1998, and homosexuality was being more accepted and embraced. In this town, it was still 1958. Rick, and I had a fight that had broken my heart. He had gone back to Manhattan.

As time went by, the letters, calls, and emails lessened. I had begun several hetero relationships, that were doomed because of my well hidden sin, covered by alcohol abuse, and anger.

Rick’s brother, had a job at World Trade Center as a janitor, and Rick, worked there as a Secretary. I had called him, as I always did. Every Sunday. This Sunday, was special as it was his Birthday. That was the last time I talked to my first love.

I saw the horror, and his death live on CNN. This sent me deeper into hiding my “sin”. I found a woman, that loved me, and we got married. However, we never consummated the marriage. We lasted 11 years. I blamed my lack of performance on work, stress, or just being too drunk. She left me in 2012.

Soon after, I began a relationship with a bisexual woman, who has a wonderful son. She helped me be more comfortable with my “sin”. However I just wasn’t ready to come out yet. She and I broke up. But she left an indelible mark on my heart and soul. I had a few more relationships, all failed.

I finally stopped abusing booze, about 3 years ago, began counseling, left that horrible town, got a decent job, and reclaimed my life.

I always had a Facebook account, I used it to post jokes, and “What Kind of Pizza Are You” quizzes. Then I did some actual looking, and found the people who are gay in school. I stated coming out to them. All of them supportive and loving. Then my best friend, who I found out is bi. I began to see, this isn’t so bad. Then, I found my friend that I broke up with, because I wasn’t ready. Well she went on to become a female to male transgender, and willing to give me a second chance, if I faced the truth.

I finally, said this is enough. I came out to my family and the rest of my friends. Surprisingly everyone from the old home town was supporting and kind.

I know this is a long post, but it was a long journey. There comes a time when you have to say “screw it”, and go for it. Don’t wait like I did.