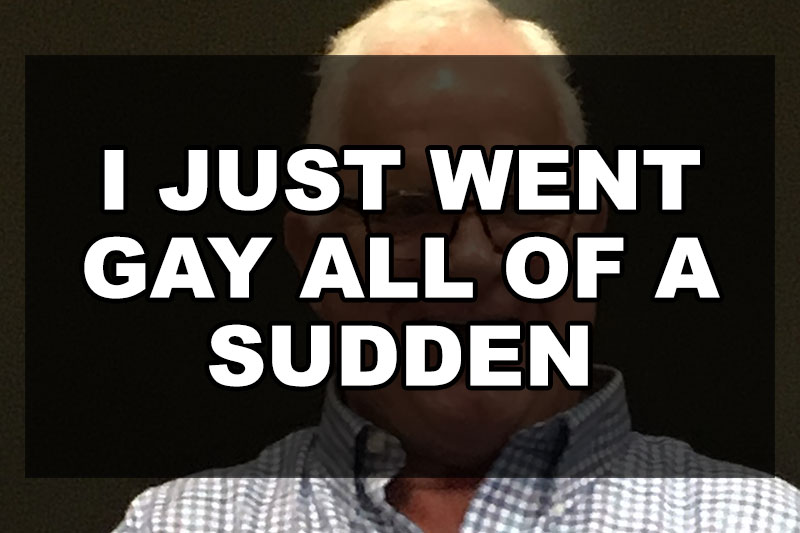 Editor’s Note: The following submission is from Loren A Olson MD. Have an LGBTQ+ related experience or story to share? Having your article published on this site will automatically enrol you into a raffle to win a $50 Amazon Gift Card. Submit an article today via queerdeermedia.com.

Of course, it didn’t happen exactly that fast, but at a precise moment, things inside my head shifted from believing I was straight to know I am gay.

I had met Roberto at the gym. I was married; he was married. What could possibly go wrong, right? I thought I would have a quick, one off experience to satisfy my curiosity about man on man sex. Except for one deeply unsatisfying experience, as an adult I had never had sex with another male.

We made contact at the gym to set up our first meeting. I was so excited I showed up early and his wife answered the door. It was an awkward moment as I backed away, saying, “Oh! Oh! Oh! I must have the wrong address.”

I met Roberto again at the gym and he was very angry about my early arrival. We talked through that and agreed to meet again at precisely 2:30 on the following Tuesday. This time I arrived exactly on time.

I wasn’t sure what to expect, although what I thought would probably happen was I would be on the receiving end of oral sex. Over and done. Curiosity satisfied. Back to my old life as husband and father. Not much would changed.

But that kiss! It wasn’t just a prefunctory, kiss-on-the-lips on the way to something more. It was a long kiss, wet, tongue-on-tongue kiss. It was a kiss like I’d never had before. It was a kiss that had no respect for my rational thought.

Although I had always been curious about how men decide who does what to whom, the kiss resolved all of those questions. No more thoughts about the rules of love-making cluttered my mind. Things just flowed from that moment with no exchange of words.

Although my wife and I both had agreed that our sex life was satisfying, I had just experienced something that was on an entirely different plain. Sensuality, passion, touch and emotional intimacy all came together in a way that for me they never had before.

Now I was faced with a predicament. I had two choices; neither of them felt acceptable. Do I try to put all of these newly discovered feelings away and go on living the pretense I had lived for many years? Or do I consider exploring a new life as a gay man, breaking my vows to my wife and abandoning my role as a committed and engaged father?

Once the steel barrier in my brain that separated my primal desires from my commitment to a heteronormative life had been punctured, I could not repair the rent in that protective shield.

I had to decide between giving up the life I had planned and a new life that was waiting for me. No optimum choice existed; I had to choose between what seemed like the best of two unsatisfactory choices.

I just went gay all of a sudden.