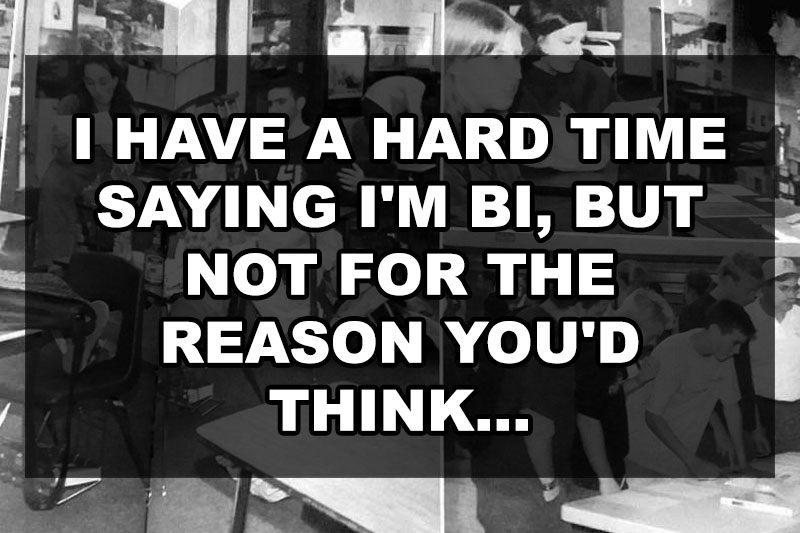 Editor’s Note: The following submission is from Stephen. Have an LGBTQ+ related experience or story to share? Having your article published on this site will automatically enrol you into a raffle to win a $50 Amazon Gift Card. Submit an article today via queerdeermedia.com.

[amazon_link asins=’B075C76XHR’ template=’ProductAdRight’ store=’ourqueerstories-20′ marketplace=’US’ link_id=’7c274289-90fe-11e7-aebe-37d8bd6907a5′]I’ve known I was bisexual since high school. Sexually, romantically, and emotionally interested in both men and women. All of friends throughout my life have been LGBT or allies, my little brother is openly gay, and members of my family know I’m bi and couldn’t be more supportive. However, I’ve chosen to present myself as a hetero ally to the public and members of the LGBT community, especially relating to LGBT issues. I’d like to explain why.

I’m a cis man married to a cis woman, have three children born in wedlock, I’m white, and I am financially fortunate due to a career in tech. My wife is even a stay at home mom. I’m privileged. Of course I’ve faced ridicule and hate, even violence, for being bi and for being an ally. But it is not on the same level the rest of the LGBT community faces, not even close.

When I was in high school (1998-2002) a group of us got together and formed a Gay Straight Alliance chapter on campus. The county was very conservative and rural, and the backlash was real. At the time I was still confused and living as a hetero male. I was the only hetero male in the group, the only in the club. None of the other boys would risk being called “gay” for being a member. What the LGB members of that club went through during that period of time was unnerving. Faculty fought the club and went as far as calling students out in class. Tires were slashed, there were efforts to scare and intimidate, life long friends wrote them letters saying they were going to burn in hell… Immediately after the student council meeting where our club was ratified, the president of the student body was in tears and being consoled by faculty. Her efforts to change the rules to block the club had been thwarted by something, I don’t remember. Maybe threat of a lawsuit, maybe a silent ally high up the ladder somewhere, who knows. All that had my attention was the blank looks on my friends’ faces. I watched them go through their days with visceral proof of how disgusted so many people were with them. Some time later the founder of the club teamed up with me on a fund raising effort for victims of 9/11. He was going around to businesses asking them to put up flyers. At one point he said, “I didn’t know what it was like talking to people about a cause they don’t have contempt for, but are in support of through genuine empathy.” All I heard was, “Why can’t they have empathy for people like me?”

The LGBT community has enriched my life and given me the closest friends and most loving support and acceptance. They are the closest thing to a community I have. But as I get touched by each one of them and am drawn into their lives, I see and am exposed to more of this reality. What I go through being who I am is nothing compared to the real systematic bias and social stigmatism they have faced in their lives.

I’m a programmer, I guess you could say a “computer scientist” at heart. My hero is Alan Turing. I became obsessed with computers at age 8, and knew early on what I wanted to do was build machines that could think and feel like people did (inspired by Data on Star Trek). Alan Turing envisioned the basis for the modern computer while laying in the grass and staring at the clouds at age 23. A movie was made about him recently so his life is more common knowledge now, but as a child reading about him was like discovering there was a superhero nobody had ever heard of. This superhero laid in the grass like I did and imagined the same kinds of things in the sky. He birthed an entire industry and field of science from his imaginings, saved millions of lives by ending a war using the things he imagined, and he imagined the same thing I did. Machines could think. When it was made public he was gay, it wasn’t the ridicule that got to him. It wasn’t the debilitating hormone therapy they forced him to undergo. It was the fact that nobody would believe the things he imagined anymore. He wrote something like this near the end to a friend, “Turing believes machines can think. Turing lays with men. Therefore machines cannot think.” It didn’t matter how brilliant he was, how many lives he saved, how revolutionary his ideas were… they were all invalidated by the fact that he was gay. This thing he wrote haunted me from the moment I first read it, and it fills me with hopelessness and frustration every time I think about it, which is almost every day.

I am bisexual. My wife and I have an open relationship, so I’m sure one day I’ll end up on in relationship with a man again. But my life has been and will be nothing like Alan Turing’s was. Nothing like my childhood LGBT friends. Nothing like the members of the community I feel so connected to. I’m not ashamed that I’m bi. But I do not want to say to the world that I am LGBT. My specific circumstances and trajectory has insulated me from the oppression they face, and probably always will. This probably isn’t true for most bisexual people, but it is true for me. My role is not to represent myself in the LGBT community, but to be an ally. I will always be an ally. And because of what the LGBT community has already done, if my bisexuality is ever a part of my public persona, my outcome will be different: “Stephen believes machines can think. Therefore, machines can think.”