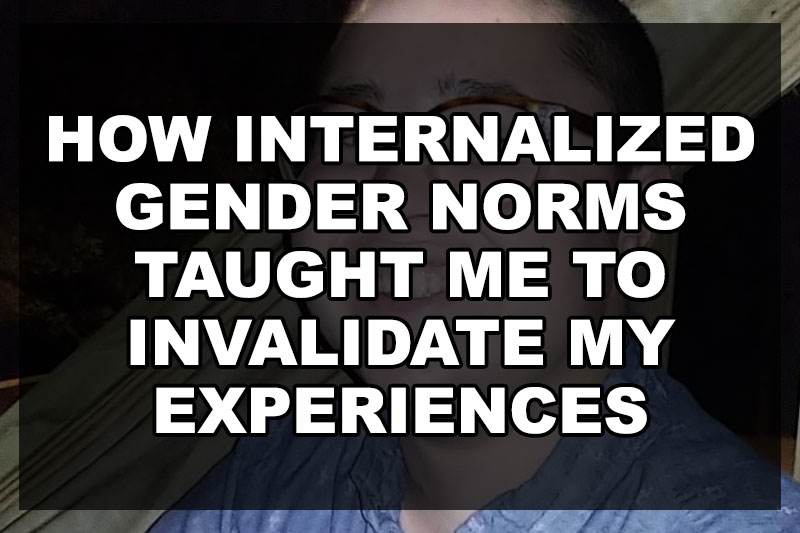 Editor’s Note: The following submission is from Isaac Venditelli. Have an LGBTQ+ related experience or story to share? Having your article published on this site will automatically enrol you into a raffle to win a $50 Amazon Gift Card. Submit an article today via queerdeermedia.com.

I was raised as a female until I came out to my family as transgender when I was a teenager, and although my parents instilled in my siblings and I a strong sense of agency, society instilled in me the belief that my pain was not to be taken seriously. Any outburst of emotion was to be seen as merely hysteria, and if something were to happen to me, the first question should be what did she do to deserve it? This was reinforced by comments such as “That’s the kind of outfit girls get raped in,” made by my grandfather in reference to a high school girl, and questions like “Are you on your period?” or “Have you taken your medication?” whenever I expressed strong emotions. The message I internalized was that my pain and experiences were not to be taken seriously; rather, they were to be dismissed as overdramatic, unimportant, or caused by something I had done.

When I was 13, my ACL and meniscus were torn while in a restraint at a psychiatric hospital. As I was slammed against the wall my leg buckled, and a split second afterwards the pain hit: a searing, throbbing ache. I immediately knew that something was seriously wrong; I also knew that nobody there would do anything about it. Later that night, after it gave out while I was walking, a doctor came to evaluate me. I didn’t tell her how much it hurt; I didn’t think she would believe me. I was worried she would think I was exaggerating how it felt, or that I was seeking attention. And I felt that it was my fault to begin with: I shouldn’t have been acting out and gotten myself restrained. Never mind the fact that the restraint was performed improperly- it was my word against the words of those older and more powerful than me, and I knew that I was without recourse. I told everyone who asked that I injured it playing dodgeball, because I couldn’t imagine telling anyone what had actually happened.

At the next hospital I was sent to, a long-term residential facility, I was not allowed to use crutches or a wheelchair. The knowledge that my pain would not be taken seriously was reinforced daily as I was forced to limp to every activity, getting in trouble for being “defiant” if I didn’t participate in things like outdoor time or gym. It was around this time that my kneecap began to dislocate with certain movements, and I would have to physically push it back into place. It was a year and a half after the initial injury before a doctor (the fifth medical professional I saw for the problem) finally took me seriously enough to order an MRI and perform surgery. After my knee was healed and I completed physical therapy, I marveled at how easy it was to walk, and how much more I could do. I’d forgotten what it felt like to move without pain.

After coming out, I strived to be seen as what I was taught men should be: tough, unfeeling, invincible. I refused to allow myself to be phased by anything; I felt that I should intuitively know how to handle difficult situations. I was determined to be as much a man as my father was: strong on the outside as well as the inside, I did not allow myself to show anxiety, to cry, or to give any indication that I could be hurt. Real men didn’t worry; real men were never afraid. I was to always be able to fend for myself, and if something were to happen to me, the first question should be why didn’t he stop it? No matter who I was, it seemed- male or female- that the messages were the same: I could not show pain, and I could not allow myself to be hurt. Which meant that when I was hurt, the only way my mind knew to process it was to turn inward, to blame myself, and to do anything I could to hide the wounds.

When I was 18, I was raped twice, once by my best friend at the time and once by someone I’d just met. As I lay trapped beneath these men, I felt all sense of security I’d had slipping away. And each time, as I drove home, the pain hit with an impact so hard I found it nearly impossible to draw breath. I didn’t report either assault; I didn’t think anybody would believe me. I barely even talked to my therapists about them, for fear that they would think I was blowing the situations out of proportion, or seeking undeserved sympathy. And I blamed solely myself for what had happened: I shouldn’t have been with those men in the first place, I shouldn’t have been having sex so young, I shouldn’t have been high. Never mind the fact that I did not consent- it would have been my word against the words of men older and stronger than me, and I felt that I had no options. When I would have panic attacks afterwards, I would explain them away as asthma attacks. When I couldn’t have sex for fear of flashbacks, I told my partners I just wasn’t feeling well. I couldn’t bear the thought of admitting the truth.

I coped by telling myself that the assaults never happened. I began abusing drugs and alcohol, as well as self-harming nearly every day. It wasn’t until the #MeToo movement began to take hold that I slowly started to examine the long-held beliefs that led me to blame myself for what had happened to me, and to question whether they were based in truth. It’s been a slow process; I still have difficulty speaking about it in therapy and I still struggle to believe that what happened was not my fault. It took over two years after my first assault to feel safe enough with someone to tell them the entire story. I hadn’t known that I was capable of speaking the words, and once I realized that I could, the effect was profound. Being listened to can be life-changing.

The gender norms that children are taught in regards to pain and emotions are not only wrong, they are immensely harmful. Nobody should be afraid to express that they are hurting, and nobody should blame themselves for something that was not their fault. By telling children that their pain is invalid and their emotions are unacceptable, we are forming adults who hide their hurt and suppress their feelings. Teaching young people that they are at fault for what happens to them results in generations of adults wracked with guilt for wrongs inflicted upon them, wrongs which they could not control. But if we can instill in the next generations an understanding of their emotions and believe them when they express those emotions, we will be one step closer to creating a world free of victim-blaming and free of crimes that go unreported for fear of dismissal. This is not to say that there aren’t other issues that must be remedied. The legal system, the media, and the mental health system all need to undergo drastic changes to better support victims of sexual assault. But seemingly small steps to change the messages that our youth internalize can make a major difference, a difference that can save lives.