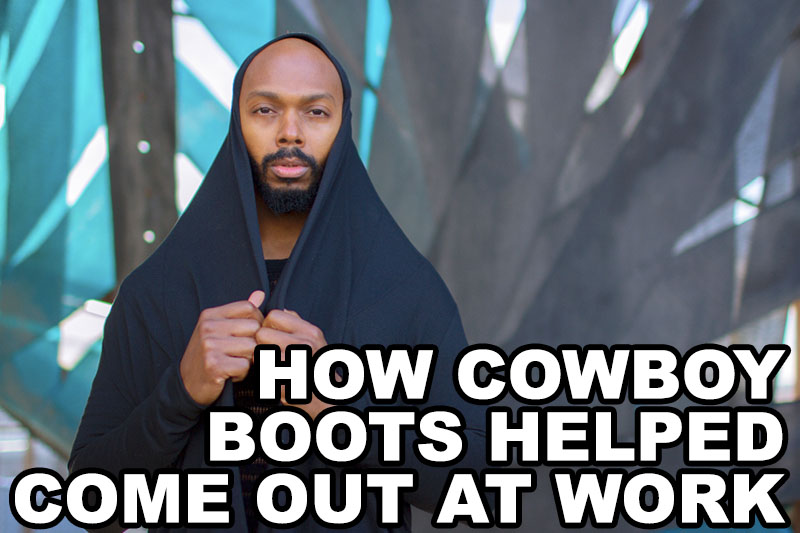 Editor’s Note: The following submission is from Victor Yates. Have an LGBTQ+ related experience or story to share? Having your article published on this site will automatically enrol you into a raffle to win a $50 Amazon Gift Card. Submit an article today via queerdeermedia.com.

[amazon_link asins=’B073QXF6GF’ template=’ProductAdRight’ store=’ourqueerstories-20′ marketplace=’US’ link_id=’3eea5734-8caf-11e7-ae53-894030b6ce71′]My grandfather loved watching Westerns. John Wayne films were his favorite. As a child, I would watch him transform his hands into guns and shoot out at the television. So it made perfect sense to me when a pair of cowboy boots helped me to come out at work.

My cousin was throwing a cowboy-themed birthday party at a whiskey bar in our hometown. I pictured the outfit that I wanted to wear: cowboy hat, cut-off Wrangler shorts, picnic checkered pattern shirt, handkerchief around my neck and cowboy boots. We went to a thrift store, and I found everything that I wanted. The boots cost sixty dollars. To get my monies worth, I started wearing them every day that summer. The boots became a conversation piece and made it easier to come out to people outside my circle of family and friends. I would often ride my bicycle around town while wearing my boots and the cowboy hat. Being a tall, Black man, I know how much I must have stood out in my predominantly white and Christian community.

Before purchasing the boots, I would define my look as preppy realness – collared shirts or polos, khaki pants, black belt, and loafers. That was the acceptable uniform for a man growing up in my religious household. I learned “real” Black men weren’t effeminate, went to church on Sundays, didn’t cross their arms, and needed to shop at Sears to be passable. Passing was a preoccupation. After purchasing the boots, I started experimenting. I lost the collared shirts and wore bolder colors, floral patterns, above the knee shorts, and metallic sneakers. The boots were my gateway to thrift stores then boutiques then Nordstrom.

One day, I wore the boots with cut-off khaki shorts and a T-shirt to hang out in downtown. A passerby whispered a derogatory slur as he passed by my group of friends. Hearing it made me realize that my city’s small town mentality toward gender non-conformity and sexuality would not change as fast as I wanted it to in order to be comfortable. Knowing that, coupled with the lack of resources of queer people of color and jobs that I was interested in, I decided to move to Los Angeles. I took what could fit in three suitcases and wore my boots to the airport.

In Los Angeles, I sought out organizations that worked with queer people of color and found my tribe of radicals, queers, writers, allies, and thrift store shoppers. Eventually, I received a job in the dormitory at a trade school that was ninety-two percent brown. During the second month, I started wearing my boots.

A Latina student said I knew you were Mexican.

Another student asked, are you gay. I said yes, then she said, I love you more now.

I never thought about coming out at work. At previous jobs, I separated work and personal life. However, I realized that my silence on my sexuality was not helping students in the LGBTQ community. Slowly, my office became a safe space for LGBTQ students. And, I came out to my coworkers one at a time. My relationships with coworkers deepened and I find myself sharing the work that I did outside of my job with them. Coming out at work has tremendously impacted my life. I no longer get anxiety when asked what I did during the weekend and I share pictures with my coworkers. At my previous jobs in my hometown, where everyone was perceived to be a straight Christian, I could not do that out of fear of shaming or retaliation. Also, my stress levels dropped after coming out at work.

Two years ago, I was asked to teach a writing workshop at the school. The majority of the students were queer, and the rest were straight. Often, the queer students writing talked about their experiences being queer, brown, and living in California.

This year, a student organized the first LGBTQ organization on campus. I felt honored when I was asked to be the advisor and extend the visibility of out staff. In the position, I was able to talk to a larger group of students who were in the community. Our first meeting was open to all students on campus. We invited a speaker from the LA LGBT Center who talked about the difference between gender identity, gender expression, biological sex, and sexual orientation. Some of the straight students who attended learned a lot, especially concerning pronoun usage. We started the meeting by asking attendees to state their name and their pronoun preferences. I made sure I wore my cowboy boots to the meeting.

For people of color (and everyone else), who grew up in conservative communities and have found it difficult to come out at work, I would like to provide you with a few tips:

Next year, I will be celebrating my third year of being completely out to everyone at work. It’s ironic to think that I would not be celebrating this without my cowboy boots. I have received the best return on my investment from the money I spent on those shoes.