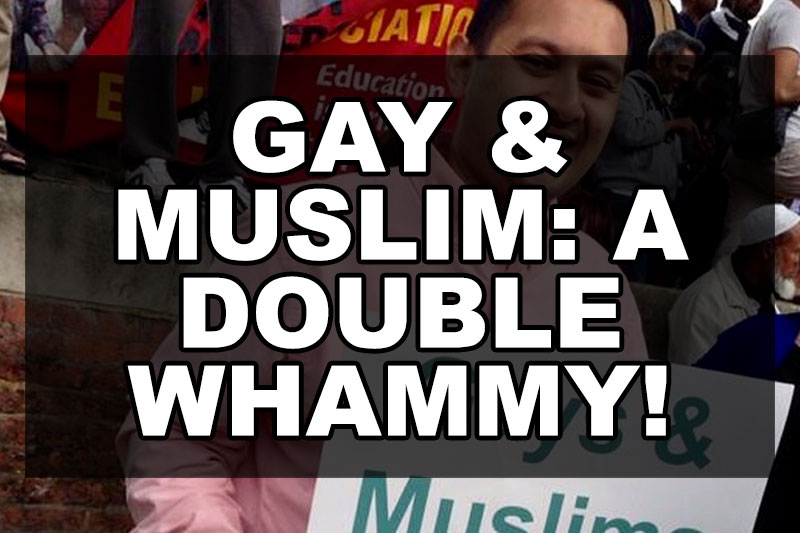 Editor’s Note: The following submission is from Ejel Khan. Have an LGBTQ+ related experience or story to share? Having your article published on this site will automatically enrol you into a raffle to win a $50 Amazon Gift Card. Submit an article today via queerdeermedia.com.

[amazon_link asins=’B01JXG66V8′ template=’ProductAdRight’ store=’ourqueerstories-20′ marketplace=’US’ link_id=’f8f10b48-8c9d-11e7-b8eb-8fa79371862f’]I was born in the UK to Muslim immigrant parents. Although not religious, we were a conservative; culturally Muslim family. Saying it was hard growing up in 1970/80’s Britain, is an understatement! What the world viewed of Britain was the royal family and Monty Python. However, my reality was as far removed from that as possible. My upbringing in my industrial town, can only be described as downbeat. Racism, and the violence that accompanied it, was the backdrop to my formative years. I had no time to even dwell on sexuality – rather survival was the permanent fixture on my agenda. Visiting London on a school trip introduced me to the arts, and all it had to offer. After all – London was the world’s capital of culture.

By the 1990’s I was a regular visitor to London, sampling the delights it had on offer. There was a massive gay scene then, with all niches catered for. I took to it, like a fish to water. Meeting men from a variety of walks of life, it opened my eyes to a world I could only dream of. I started visiting art galleries, museums and soaking up the history of my great country. For the first time I had a sense of belonging. I felt welcomed into a scene that was egalitarian and non-judgemental. A world away from my hometown, where if your face didn’t fit, you weren’t going in. My existence was schizophrenic; fighting white men by day and fucking them by night.

Everything changed on 9/11, a country I had visited on several occasions. A country, which I loved; and one which reciprocally loved me. Britain committed its troops to the so-called ‘War on Terror’, becoming America’s go-to ally. Perceptions of Muslims changed, both sides of the pond. My community was feeling increasingly marginalised. Then came 7/7 – UK’s worst terrorist atrocity. This incident spurred me to stand up and be counted. The atrocity was carried out on home soil, by British Muslims. My conscience told me to speak out, and that’s exactly what I did. At first my activism was localised, then I went national. By this time social media was emerging and voices like mine could finally be heard. I became a bridge for disparate communities; bringing my life experiences to the fore.

Today I’m a bonafide activist, not just in the LGBTQIA+ arena, but with a broader human rights remit. My work has seen me challenge extremism, fundamentalism and Islamophobia. At last year’s London Pride, I was with a contingent condemning the atrocities in Orlando. I will continue to highlight injustice wherever I see it, and from whomever it may come from. My life experiences have left me to understand that all humanity is sacred. With my unique vantage point I will endeavour to affect change for the betterment of humankind. My message is one of peace and love for all.