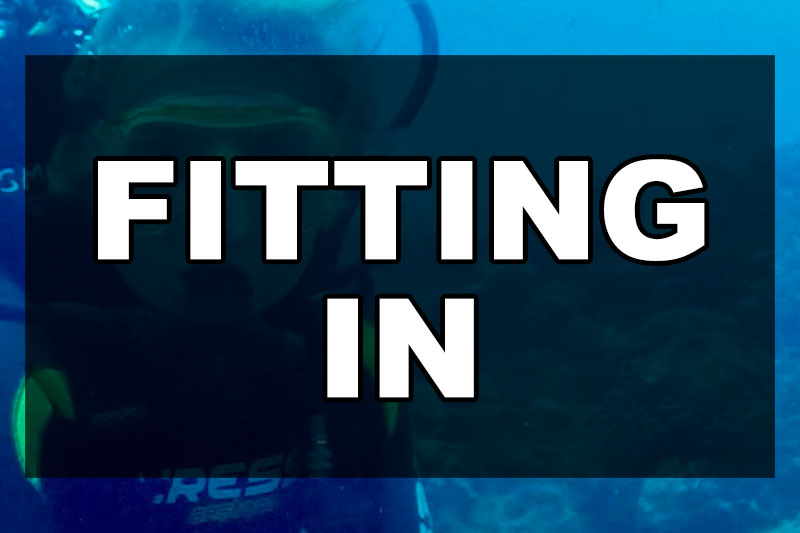 Editor’s Note: The following submission is from Mari. Have an LGBTQ+ related experience or story to share? Having your article published on this site will automatically enrol you into a raffle to win a $50 Amazon Gift Card. Submit an article today via queerdeermedia.com.

All my life, I have been pretty good at fitting in. Or at least, maintaining the appearance of fitting in. I lived with this idea in my head that I could become anyone I wanted to – anyone who’s better, who’s not weird, who’s somehow perfect.

I grew up in Ukraine. A country now wrought with pain, trying to figure out its place in the world – somewhere between its communist, conservative past, and a bold, progressive future. I think it’s ironic how, in a lot of ways, my story overlaps with that of my country.

I knew I liked boys and girls from a pretty early age. I remember being eleven and having a crush on a few girls in my class. In Ukraine, you stay in the same class with the same people for eleven whole years; so I knew them pretty well. There were sleepovers, spin-the-bottle sessions, crushes. I remember coming to school, and suddenly everyone knew what I was. Who I was. Who, not what. I had to remind myself to correct that thought back then. This guy I had been sitting with for years at the time offered to pay me money to watch me make out with a girl.

I should have taken the money.

I had pride back then.

During class when we didn’t have assigned seats, I would sit closer to the back with my best friend and write fan fiction in a spiral-bound notebook. Queer fanfiction. Slash fanfiction. It wasn’t very good, but for me, it was a great escape from the world around me. To create a story in which people like me could exist and love and live. Bonus points if they went to Hogwarts.

I remember watching Queer as Folk US for the first time as a teenager and not believing there was a show like that out there. So bold, so new. I was excited, so I showed it to my mother. Thankfully, she didn’t judge me – she actually liked it too, and we ended up watching the entire thing together. It’s only now, almost a decade later, that I realize how special that is, and how few queer kids get to have that moment with their parents.

I moved away to Spain when I was seventeen. Still green, still inexperienced in life. Made some bad choices, slept with some weird boys. Met my boyfriend, a sensitive, smart guy; felt love for the first time. Ended up feeling good about myself, doing theater, singing in the choir. Creative stuff, stuff I could never really do in Ukraine. We traveled and laughed together, I studied passionately, still happy that I could fit in.

Things went well until one day I realized after I came back home for Christmas that I had become “the fat friend.” I no longer fit in. Anywhere: my friends, my Ukrainian society, or my jeans.

I threw myself into working out and dieting. It started with signing up for the swimming pool and eating healthier and ended with waking up at four in the morning to walk eight miles. I’d drink twelve liters of water a day and eat an apple. That’s it. An apple. By the time the summer was over, I was about thirty-six kilos and severely depressed.

You see, mental health care doesn’t really exist in Ukraine; not in the way it does in the Western world. People who lose a lot of weight in a small amount of time like I did are praised for being so strong, so perfectionistic. My boyfriend was terrified of losing me then because my perfectionism was slowly driving me into an early grave.

It took a whole war in Ukraine to get me back on my feet. Two years, an annexed Crimea, and combat in the East later, I found myself slowly getting back to who I had been. I finished college, and I got into a Master’s program in the Netherlands.

I found myself lost in a new country, with cool people and cold weather, and no sunshine. I was alone in a new country all over again, just as I had been at the age of seventeen, and I was terrified of spiraling back into my old, self-destructive patterns.

It was at the end of the spring semester that I found my meaning. I became a therapist in training. My partner, a beautiful, intelligent, queer woman. My clients, an exciting and challenging bunch. That summer kicked me back into action, and it became even better when I was introduced to the local LGBTQ student group. Suddenly, I was involved. I was fitting in again, but this time, it was different.

I fit into the right place.

It’s cliché, I suppose, but it felt like a puzzle piece just sliding into the spot it was supposed to have been in all along. I was among people who were like me. Who had difficulties fitting in but still managed to band together. People who just wanted to live and have fun and educate the world. These people became my crutch when things got hard, and I count myself lucky every day that I can lean on them.

I fell in love once more. With my partner. It takes a lot of talking, and a lot of tears to balance my two relationships. Nobody knows what will happen. I hated the idea of being a stereotype: the polyamorous, greedy bisexual.
I guess I was that too. All I know is that holding their hands – both of their hands – felt right. Felt good. Felt like I was in the right place at the right time.
But I came out to my mother at the age of twenty-three. I started a podcast. I finished my degree. I found friends in the unlikeliest places, and I found love among people whose understanding and passion propped me up when my feet were unsteady.

It’s not easy. I come home to Ukraine, and I come back to not fitting in. I find myself strangling the part of me that has blossomed over the past year and a half, and hiding the most beautiful, intimate part of who I am. My queerness. My not fitting in. People like me are not welcome here, not yet. Maybe not ever; although if there is anything I learned from my experience, is that a little hope and an active, educated community go a long way.

Fitting in is not about changing yourself, in the end.
It’s about finding people who make you feel like you can be yourself among them.