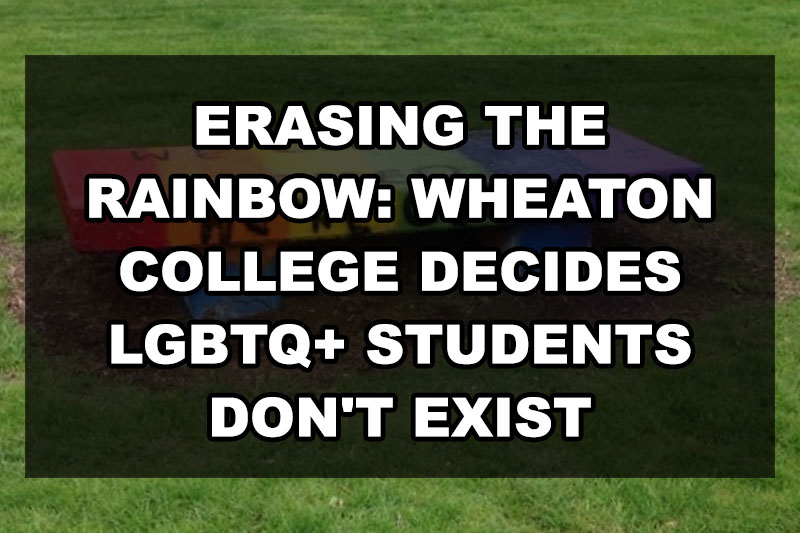 Editor’s Note: The following submission is from an anonymous submitter. Have an LGBTQ+ related experience or story to share? Having your article published on this site will automatically enrol you into a raffle to win a $50 Amazon Gift Card. Submit an article today via queerdeermedia.com.

[amazon_link asins=’B073PSRT3G’ template=’ProductAdRight’ store=’ourqueerstories-20′ marketplace=’US’ link_id=’5376f3f4-8ca0-11e7-a5ac-537919c6fe5b’]Wheaton College on “Christ-Centered Diversity”: At Wheaton, we believe that honoring God in everything we do includes honoring him in relationships that bring together people from different ethnic backgrounds. That’s why we’re committed to cultivating a diverse community of students, faculty and staff who reflect the wide spectrum of God’s Kingdom.

Now I believe that creating a diverse spectrum of students is important. But why does diversity have to stop at ethnicity and race. What about other minorities that have been pushed to the margins all over the world. Shouldn’t we be seeking to diversify our campus by offering Christ and His Kingdom to the entire world?

It’s 2017 and Wheaton College is still ranked among the worst schools for LGBTQ+ students. In this country, the LGBTQ+ community has fought for equal rights in many ways and has accomplished much in terms of equal representation through forms of protest, rioting and battling it out on Capitol Hill. However, in many parts of this country the fight is still far from over. Schools like Wheaton College still suppress the visibility of queer people all over the country and the world. 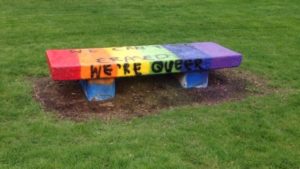 In Wheaton College’s dining hall: Anderson Commons, there are flags of various nations hanging on rungs all along the interior. According to insider information, there were a few unoccupied rungs in the dining hall; empty spaces for which a flag could’ve been hanging. The night before April 29th2017, a gay pride flag was hung by students in the Anderson Commons Dining Hall in one of the unoccupied spaces to avoid trouble. However, if anyone wanted to argue that the gay pride flag doesn’t stand for a nation, they might want to get their facts straight: http://gaykingdom.info/. Regardless of this semantic detail, the gay pride flag was removed in less than 12 hours out of shame and to avoid a scandal and in response to the following:

What a Wheaton College student’s mother had this to say regarding the incident:

“When the gay pride flag flies at your Christian college, it is a direct attack on the Word of God, It’s shameful… Wheaton has compromised with truth long ago, and fears the wrath of media and gay students more than they fear the Lord God”

Read the rest of the hyper-conservative article that picked up the news of the addition of the flag: http://www.toddstarnes.com/column/who-raised-the-gay-pride-flag-at-wheaton-college

As if this weren’t the only issue, The Resident Director of Fischer Dorm, Jerry Woehr and Dean of Residence Life, Justin Heth came upon the room of a queer student who lives in Fischer Dorm. This student had a large gay pride flag displayed in their window—in the privacy of their own room—on the west side of the building. Woehr and Heth collectively asked the student to take the flag down because it does not reflect Wheaton’s stance on homosexuality.

Furthermore, the school has selectively denied students the right to free speech. The Bench is a well-known tradition at Wheaton College. It is a symbol of expression; students are supposedly free to paint the bench to express whatever they’d like: to celebrate, to advertise campus happenings, to evoke provocative thought, to recount history, to tribute members of the campus and the college, to speak out on social justice issues. Students are free to paint over it as many times as they’d like in whatever time frame they’d like so they can showcase to the campus the members that comprise the student body. However, it’s a whole different thing when the school itself–not the student body–decides to quickly and ashamedly cover up the expression of an increasingly real student population to avoid a controversial scandal. 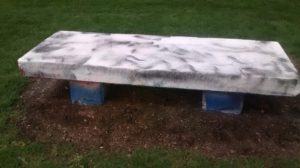 On the night of May 3rd, 2017—the week that alumni, parents, and family would arrive on campus due to Commencement that following Sunday—a few students decided to paint the bench in response to the flag issue. The bench sported a gay pride rainbow with words saying WE CAN’T BE ERASED. WE’RE QUEER, WE’RE HERE (on the backside). Yet again in less than 12 hours, the school decided to eradicate the issue by covering it up with white paint in an attempt to hide the issue from alumni and Wheaton College families. They literally erased the queer students.

LGBTQ+ students exist on Wheaton College’s campus and deserve just as much representation as the other student groups on its campus. The school’s inability to take a stance on the issue of homosexuality should not detain equal representation for all students. The LGBTQ+ community will not be pushed back into the closet. The pain and frustrations are being heavily felt by queer students due to the school’s lack of acknowledgement on this topic.

As one student puts it,

“The message is quite clear: we will erase you, and don’t be here or be here and shut the hell up and pretend you’re not. (Just to be clear, I understand the fragility of the administration’s position on this, and that members thereof may individually want us here–or believe they do–but the culture of evangelicalism has defined itself as fundamentally against the existence of queer people, so no matter what balancing game they try to play, queer students will be the ones takin the hit and being silenced.”