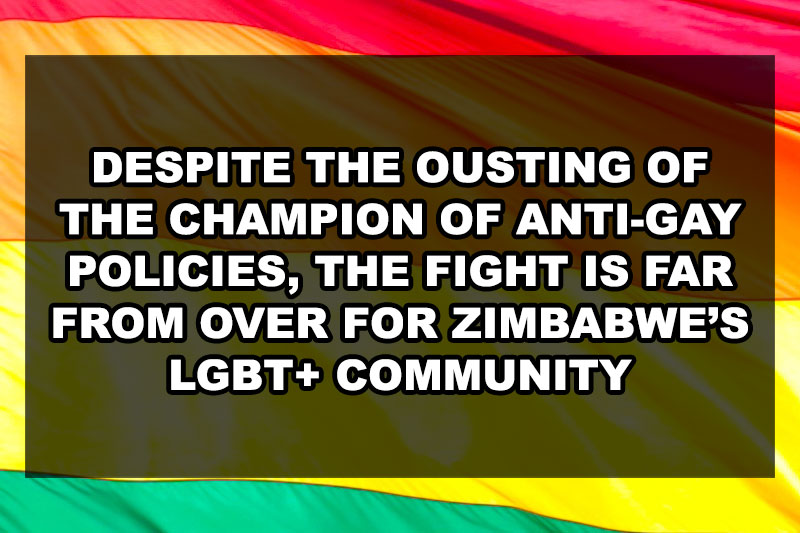 [amazon_link asins=’B01M28JGD4′ template=’ProductAdRight’ store=’ourqueerstories-20′ marketplace=’US’ link_id=’c64ebd09-e37f-11e7-9fe6-8baeab147145′]Zimbabwe’s newly sworn in and interim President, Cde Emmerson “the Crocodile” Mnangagwa has a very tough job of reviving the economy. His inauguration speech raised a lot of hope which – for some – was shattered with the recent announcement of the not-so-new, not-so-lean and gender-imbalanced Cabinet. Zimbabwe needs serious and urgent reform which involves weeding out corruption and financial (mis)management if it is to resuscitate the ailing economy and will solve the cash crisis that sees some people spending the night at banks. It becomes hard to imagine how the ship can be steered in the right direction when it is still controlled by the same people who contributed to, largely benefited from and never felt the brunt of the economic downswing that has riddled Zimbabwe for so long.

I am not quick to put my faith in Cde Mnangagwa or hail him as the heroic leader that the country needs right now. Politics is a tricky game that can easily see gullible people being hoodwinked by the populist rhetoric which may never be actualised once power begins to erode one’s conscience and their interests are placed at the fore while the needs of the ordinary citizenry are overlooked. As a long-time ally and “comrade in war” of the former leader, I am not yet convinced that Cde Mugabe’s interim successor is any better than him. As one who has also been a beneficiary of the deposed President’s corrupt, tyrannical and nepotistic leadership, I am not yet convinced that he is not like his “mentor”. I highly doubt that his is a more democratic and servant type of leadership. I know I am judging the man harshly, but I must. As a matter of fact, I am holding all presidential candidates in the 2018 elections to the same standard. Zimbabwe needs to. And Cde Mnangagwa already has a trail of political shortcomings that count against him and make it hard to hail him as the champion that some are already seeing him as. He – and every other candidate – needs to know that the ordinary Zimbabwean folks would rather see a sermon that hear one now. One can only hope that – should he lose in next year’s elections- he will accept the results of, what hopefully will be, a free and fair election.

In his inauguration speech, the new leader spoke of the need for Zimbabweans to work together to improve the nation and how the government will work towards ensuring that democracy is strengthened and respected. According to the supreme law of the nation, the Constitution, it is the duty of the President to promote unity and peace in the nation and to respect the diversity of the people and communities of Zimbabwe. Bearing this in mind and given the stance of his predecessor towards the LGBT+ community, I feel the leader missed an important opportunity to champion the cause for respect and acknowledgement of the rights of queer Zimbabweans. The organisations advocating for LGBT+ rights have had their hopes raised that this new era Zimbabwe has been ushered into may bring with it a favourable change for the queer community. It may be their jubilation over the deposing of the homophobic leader that led the Army Commander, Valerio Sibanda to urge graduating army recruits to “defend” Zimbabwe against homosexuality. This is an incitement to violence and, given the violent history of the army, should not be taken lightly. Such utterances, while being an exercise of one’s freedom of thought or expression, are hate speech and an infringement of other people’s right to not be subjected to dehumanising or degrading treatment. Sad to note, the Constitution seems to be an exception when the other people are members of the LGBT+ community. Hate speech or advocacy of hatred towards the queer folks goes unpunished. Our right to not be subjected to inhuman treatment is wilfully violated and the leaders do not bat an eye. It is sad to note that even the Zimbabwean legal experts and activists who are very vocal on social media seem unperturbed by the ongoing, unfair and undeserved hatred that queer folks continue to endure. Their indifference or silence can only be taken to mean approval.

If the interim President cared at all about creating a more inclusive, more democratic Zimbabwe, he would have addressed the issue of LGBT+ rights during his speech. The fact that he didn’t speaks volumes about his own attitude towards the LGBT+ community. But then again, he has also uttered anti-gay opinions in the past. How do we improve the nation or begin to see its governance as democratic when there is a group of people that remains marginalised and whose rights are not acknowledged by the Constitution, the same law purported to be founded upon respect for “fundamental human rights and freedoms” and “recognition of the equality of ALL human beings”? The same Constitution that says that ALL persons are equal before the law and have the right to equal treatment. The former President has, in the past, claimed that “gay rights are not human rights”. One does wonder if Zimbabwe’s queer folks even considered to be human? Indeed, the fight for the recognition of LGBT+ rights is far from over. For many of us, that only means a continuation of living double lives or living in fear of being harassed or attacked. For many of us, being open about our sexualities or gender is always going to be more of a risk than it is liberating.