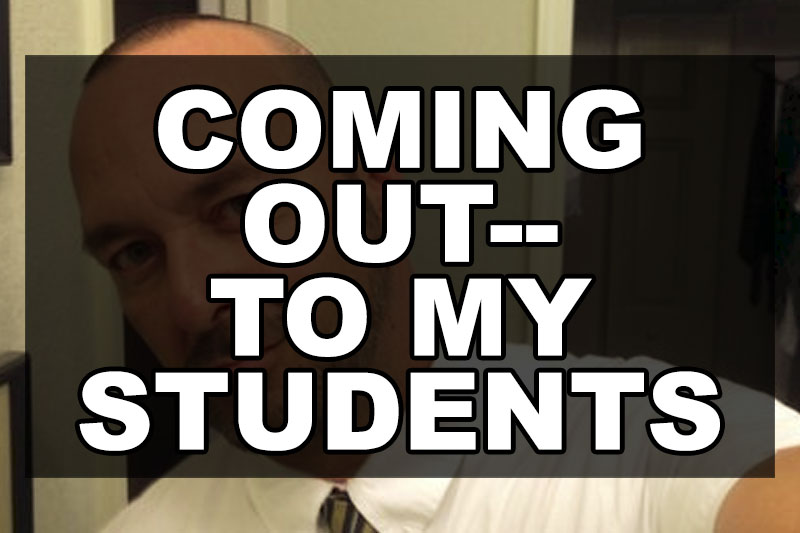 Editor’s Note: The following submission is from Dan Thornton. Have an LGBTQ+ related experience or story to share? Having your article published on this site will automatically enrol you into a raffle to win a $50 Amazon Gift Card. Submit an article today via queerdeermedia.com.

[amazon_link asins=’B0728HCVCC’ template=’ProductAdRight’ store=’ourqueerstories-20′ marketplace=’US’ link_id=’e42ea8d0-8c98-11e7-9d56-67fa421051e0′]I’m sure if you talk to most LGBTQ people, they will say that coming out is an ongoing process. We come out to our friends, our family and our co-workers. Not necessary in that order, sometimes over the course of several years or maybe all at once. Having come out in my late teens and early 20’s, I didn’t realize I would have to face that fear of rejection again in my early 50’s and it would be to a bunch of 5th graders.

I guess I first came out in my first year at college, thanks to the insight and encouragement of a new friend, B.B. She helped me acknowledge my attraction for men (I had, after all been having sex with them for 6 years by then) and alleviated my fears that I would go to hell or be beaten if I came out. She took me to my first gay bar in Greenwich Village (Ty’s) and left me there to…be gay. I never looked back.

Friends, I suppose, were the easiest for me to come out to. I honestly can’t think of one friend that I lost because I told them I was gay. Family, however was another story. In 1990, I fell in love with the man I still am with to this day (snoring in the bedroom as we speak). Early in mine and Kevin’s relationship, I started getting calls from an ex of his who was basically stalking him. Stealing his mail, including his phone bill, was how the ex found out my work number. Fearing that the psycho ex would find my mother’s phone number, I decided to be proactive and tell her I was gay before she heard it from some weirdo.

Her reaction, while not rejecting, was not really supportive. She was surprised and thought that I needed to see a psychologist, and “don’t tell your father.” I knew she would come around eventually, and just needed some time. I knew she had to grieve for the man she hoped I would become and had to learn to love me for the man I was. I think she realized I wasn’t going to change, and my relationship was not a “phase” and so accepted the truth. Any misgivings she had, she kept to herself.

Fast forward 25 years, and the monumental Supreme Court ruling which made what I had never thought possible, possible. Kevin and I said “I do” to each other among our friends and family. It truly was the best day of our lives. I hate to say this, but I felt “normal”. I was able to fulfill a life goal that many people take for granted.

Our summer wedding ended and vacation was over and yet, there was another coming out challenge yet to face. My students. At this point of my life, I had been a teacher for 20 years and as a gay man, living in Florida, I kept my sexuality a secret from my students and for the most part, their parents. “Are you married?” “Do you have children?” “Do you have a girlfriend?” students would invariably ask, and to this I would always respond, “I don’t talk about my personal life with 5th graders.” I was terrified about what would happen if students knew I was gay, but this year was going to be different. I was now legally married and I was not going to lie and evade my students anymore.

During open house that year, as always I had “3 truths and a lie” posted on my board for the kids and parents to ponder while they waited to find out about my grading and homework policies. One of the truths was, “I got married over the summer.” I remember telling some other teachers of my intentions and they were split–some thought I shouldn’t push the envelope, while others said go for it. When it came down to revealing the one lie among the truths, I called on my audience to tell me which they thought was the lie, one bright student said “Well the married thing is probably true since you’re wearing a wedding ring” and while this was probably my moment to tell everyone, “Yes, it’s true. I was married to the man I’ve loved for 25 years”…but I opted for a simpler, “Yes, I was married this summer.” I just wasn’t ready to put it all out there. Holding it back from my students for 20 years was a more difficult hurdle to jump over, it seemed.

Coming out to my class would come shortly after that, and it would come in subtler conversations with my students. The first one was when a student, a girl, gave me a girly bracelet and said I should give it to my wife. I told her that I was actually not married to a woman, but to a man. She giggled and I giggled and told her, “I don’t think it would look too good on him.”

Students talk, of course and I knew that this student would tell others. I confirmed this when another student casually asked me one day, “What does your husband do for a living?” I told her that he was a truck driver and she gave the most honest and innocent response to my answer. “Cool, do you get to ride in his truck?” Simple as that.

I knew then, that my fear of coming out to my students, was not as bad as I thought it would be. They deserve honesty from me and while they might giggle at the “differentness” of a man loving a man in marriage at first, they get over it quickly and they turn their attention to more important things, like skate night and the new video game they were getting that weekend.