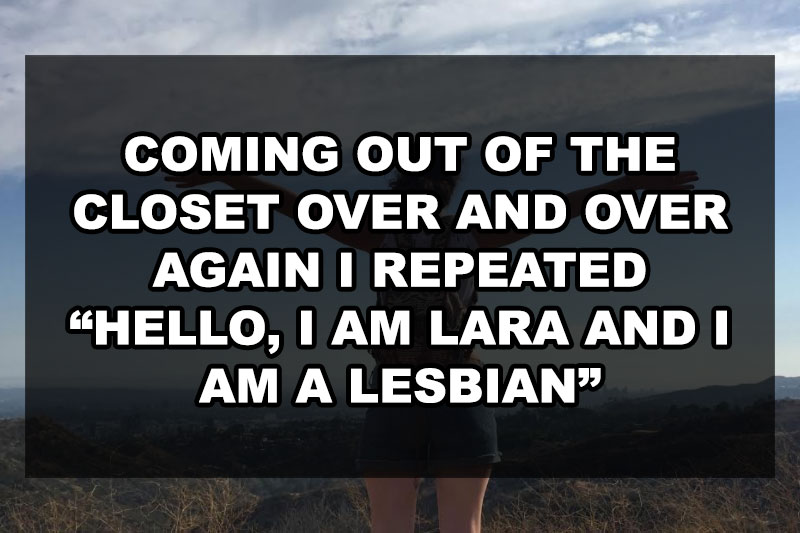 Editor’s Note: The following submission is from Lara Rosales. Have an LGBTQ+ related experience or story to share? Having your article published on this site will automatically enrol you into a raffle to win a $50 Amazon Gift Card. Submit an article today via queerdeermedia.com.

I never liked the phrase “coming out of the closet” until I realized it wasn’t the phrase I didn’t like…it was having to do it. I realized I was in the closet when I was about thirteen years old. It was a closet covered in hate, in fear and in shame. Hate for not understanding why this was happening to me when half of society said it was wrong. Fear for not knowing how to say it and what would happen once I said it. Shame for wanting to be myself going against hate and fear. Nevertheless, I found comfort when I connected my closet to Wi-Fi and I wasn’t so alone.

From my little spot in the world, I started talking to people who found themselves in my situation. I took different quizzes that would supposedly reveal more about myself. Through Twitter I met people who supported me; people who to this day are part of my life. Social media became a safe haven where I could be myself without being judged and without the hate I was feeling. Yes, there are judgmental people online but I had found a safe community with people who understood me. Like that, for a very long time I stayed inside my closet with Wi-Fi.

For years I decided my closet was bisexuality. At first, I thought that was the label that defined me. I thought that by identifying myself this way, it would be easier for people to accept me. “Yes, I like women but I also like men so it’s okay. Right?” That was my belief. If the chance to have a relationship and a future with a man still existed, people would be okay with me. Little by little I started realizing I chose the bisexual label because it made me feel better. It was easier for me to accept myself that way because somehow I could still do what society expected of me…or what I thought the people around me expected of me.

Multiple times I heard people – like my mother – saying that you don’t go around introducing yourself “Hello, I am Fulano and I am heterosexual”. That made me wonder why we, the different ones or the ones out of the “norm”, should do it. Why is it necessary to talk about our sexuality? Why do we have to label ourselves? These were questions I asked myself because I wasn’t ready to accept who I was. Maybe because I was angry. Angry because I knew other people didn’t have to do it. Knowing they could go on with their lives without having to reassure who they were. But also angry at myself for letting what society expected of me dictate who I was.

In reality, it’s all a process. A process that starts when you find out you’re living in the closet and you have to understand what that means. I think from the beginning we know we are different. That the representation we see on TV doesn’t identify us. That we won’t reach the goals that were imposed on us when we were born. And sometimes that hurts. It hurts to be different. It hurts to feel like we are going to disappoint people for who we are. It hurts to be yourself. But that is the process. Understanding why our differences make us incredible. Understanding that we still have a great future ahead of us. Understanding we can still reach those goals. Understanding that the only disappointment would be prohibiting our own happiness.

My process lasted seven years and I think those were the hardest years but they made me who I am today. Hate became love. Love for my sexuality and for the life I had once been so mad at. My sexuality finally got the label it deserved: lesbian. Fear transformed into courage. Courage to tell the people I love who I really am. But also the courage I had within me. Shame changed into pride. Pride for who I had become, for who I chose to love and for the family and friends who accepted me without judgment. And like that the process that started in the darkness found its ending in that well-known rainbow of the gay pride flag.

I did it. I came out of the closet; “uit de kast komen” in Dutch or “sortir du placard” in French. My friends in social media already knew it. First I told my best friend who took it as the most “natural” thing. After that, I told my university group. I sent a photo that said “that’s my girlfriend”; their replies were heart emojis in every color. I continued with my mom who helped me tell the rest of my family. I knew if she accepted me, I would be fine. Slowly I started conversations with my family members. Throughout all of them I cried, because I always cry, but I realized the hatred had been in me. My family was more in favor of my happiness than I had been. The fear I had once had changed into daily jokes that show me I am accepted.

It was coming out of the closet what made me realize this process has no end. You don’t stop coming out just because you did it once. I wish it was that easy! I come out of the closet when I go to a bar and a guy tries to flirt with me. My answer is “no, thank you” but my brother’s is “get out of here, she is a lesbian” and that gives me my place. I do it again when I start a new friendship. When my parents or grandparents’ friends ask “when will you get a boyfriend?” Boyfriend no but girlfriend yes. I am getting used to it. Getting used to getting out of my small seven year-old closet. The door is fully open; I go in and out just so others can understand. Sometimes I go back in to see how far I’ve come but I never stay for long. I don’t have to hide anymore.

Maybe this process will be over when I say “and this is my wife, (insert name of my future wife: Rissa)”. But maybe not. Maybe even then I will have to explain why a woman and not a man. When I have kids and I have to explain I am one of their two mothers. Everything in my life will indicate I am a homosexual woman and I will still have to say it. Yes, this process will definitely never be over. But the shame will. The wishing I had been born different will be over. It doesn’t matter who I say it to or how I say it because at the end of the day I am okay with myself.

I’ve been coming out of the closet over and over again for ten months. Eight years fighting with myself. I count everything by months or years that I have been in this journey. The truth is, this isn’t the only thing that makes me who I am. I am Argentinian, I am Latina, I am a crier and I am grumpy. However, I don’t have to come out of the closet or make a big ceremony to say these things about myself. Only one of them has to be clarified and repeated. So, with nothing else to say…“hello, I am Lara and I am a lesbian”.