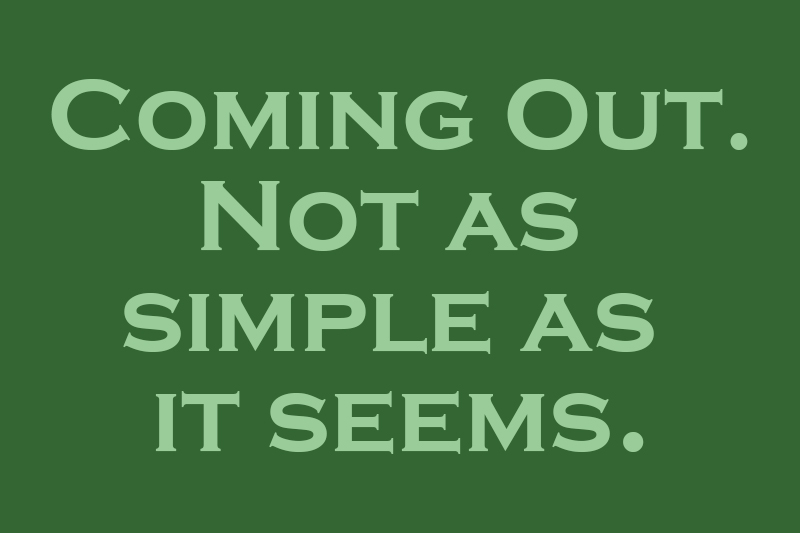 Editor’s Note: The following submission is from Joshua Michael. Have an LGBTQ+ related experience or story to share? Having your article published on this site will automatically enrol you into a raffle to win a $50 Amazon Gift Card. Submit an article today via queerdeermedia.com.

[amazon_link asins=’B01GZ73OPE’ template=’ProductAdRight’ store=’ourqueerstories-20′ marketplace=’US’ link_id=’a5c10996-8cda-11e7-b5cf-9b61f9570fcc’]My ‘coming out’ was probably one of the worst experiences I’ve ever had. As an abuse victim my sexuality has always been hard to wrestle with. What I mean by that is that my natural self-discovery of my sexuality and my sexual self was fundamentally skewed and warped because right before I hit puberty I was sexually abused by my then best friend (who was several years older) who was a man.

That event doesn’t decide my sexuality. What it did do though is make it very difficult to trust my feelings about my sexuality as everything was drowning in self-doubt. By the time I started having sexual urges I did what many abuse victims do: Became promiscuous in the extreme, often having risky encounters, often indiscriminate between men and women. I also had a trauma-induced insight into my own body and senses, and that made me a good lover regardless of who I was with – it’s very much a sick joke.

Anyway, when I was 17 I really started to question my sexuality. I had, had male sexual partners as well as female and I had no way to safely reflect on it. I was also in my first long-term relationship – a mutually destructive one, but a long-term one nonetheless.
Then I met the first gay man my family viewed as a friend, and invited into their home. And in my brain that was like a green light of safety. But this person wasn’t good at all. He was an alcoholic and was a borderline narcissist.

Over the span of a weekend I went into party mode. My partner and I were fighting and I walked off to blow off steam. I wound up at his flat with a friend of his and throughout the whole thing I slowly became more motivated to speak up about my feelings. By the time I managed to I had been drugged. Given almost a full palette of valium alongside the full day’s worth of boozing.

I admitted everything above, plus one detail. Probably the sickest part of the event: “I think I liked it.” Now, that might sound strange, but many abuse victims wrestle with that too. I can’t explain it all that well but the short of it is that you’re confused, struggling with your identity, and you keep going back to the event almost like it’s a safety net. This can lead people to view their abusers as loving, rather than exploitative and violent.

Moving on, this admission meant one thing: I had to be gay. Everything went belly up from there. More booze, more drugs. A call to Mum happened. Somehow she had the grace to know something was up and decided to wait for me to sober up. My partner was worried out of her mind. I then got dragged back home in a car and in front of my family came out. My partner freaked out and lashed out at this family friend – namely for the state I was in. My Mother asked us all to leave and I went with them. I’ll leave that part of the story here.

The next day I came to and realised what had gone on. Guilt and shame were so tangible you could eat them. I made my way home and my then partner spent time alone with me. I did the only thing I knew to do to try and make things better – had sex with her. To her this was even more confusing than the previous night. We sat, we talked about it, I apologised repeatedly.

I decided that I was bisexual. I was still attracted to women. I wanted that to be the end of the story. For the next year, though, I was told repeatedly not to be a tourist. I couldn’t show affection to my partner if this guy was around because he’d sneer and throw a fit. Eventually he got the boot from our lives, but what he did was straight up evil.

Ten years later I still have that very same struggle going on inside. I don’t know exactly where I stand. I describe myself as bisexual on the fly so that people don’t pry. But I honestly couldn’t tell you one way or the other. My family all know I’m not straight, they’re supportive but we don’t discuss it much due to the strings attached to it. And I don’t ever want to discuss it with people who aren’t extremely close to me because the potential for the last event to happen again is too great. I never discussed it with my partner beyond what triggered the event either. Instead of something that could have brought us closer it was an event that drove an irreparable wedge between us and things only got worse. It invalidated her, and shamed me, and drove me further into silence.

There is no manual to coming out as anything, at any time. And for many of us there are extra bits and bobs that need sorting through before we can. And some of us can’t even find our feet, and are forced to live in a sexual purgatory. Even though mine is a story of what can go wrong, I think most stories reflect a degree of hardship. Especially when a spouse is involved.