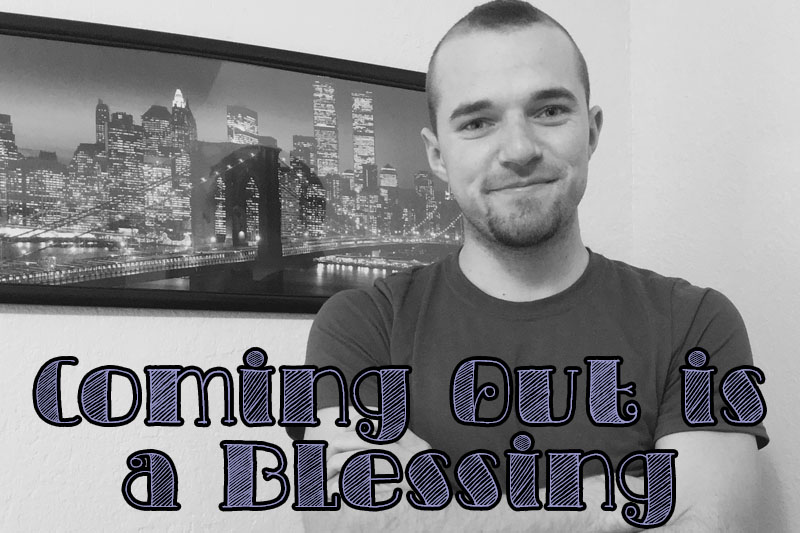 Editor’s Note: The following submission is from Kevin Martin. Have an LGBTQ+ related experience or story to share? Having your article published on this site will automatically enrol you into a raffle to win a $50 Amazon Gift Card. Submit an article today via queerdeermedia.com.

[amazon_link asins=’B0734NDM1T’ template=’ProductAdRight’ store=’ourqueerstories-20′ marketplace=’US’ link_id=’1670a3a3-8cb1-11e7-a169-fb95a83743fb’]For me, and for a large majority of the LGBT community, coming out is a process. It is not a mere one-time event, it is a continuum and a range spanning from not being “out” at all where no one is aware of your identity or your orientation (maybe you might not even be aware of it yourself) to all the way being completely “out” where everyone knows who you are and you hold no part of yourself back.

Most of us in the LGBT community lie somewhere along that spectrum, but in order to jump onto the spectrum in today’s day and age, we have to begin making our way onto that spectrum, climbing into ourselves to find ourselves and who we are. There is an event that marks the first step upon that journey onto the spectrum and that event is the decision to begin the coming out process.

My coming out process spans nearly my entire life. I first knew I was gay when I was in preschool; in fact, it is my very first memory. Most people don’t find this to be true or are surprised when they hear of this, but it is the honest truth within myself; I have always known I was gay. It’s always been a natural part of my existence. My first memory is of having a crush on a boy in my preschool class who I thought was cute and I would have dreams about him during nap time that would make me look at him a special way in real life.

From that moment on, consciously or subconsciously, I became attentive to the messages I was hearing about gay individuals and members of the larger LGBT community. From my loved ones to my community to my church and to the news and media, the only messages I heard were negative. My religion, of which I remain a faithful man, told me gays were abominations. The news wouldn’t show images of same-sex couples kissing or embracing one another during related stories and headlines because it was considered “graphic” and “obscene.” Then, the resulting commentary that followed such stories was not supportive; at times, in fact, it was downright discriminatory. Of a small community of 1,500 of which I felt trapped in, there were no role models who were LGBT that I could look up to and the ones that were suspected to be gay or lesbian were closeted so much so that the town never brought their identities up in conversation. If they were brought up in conversation, they were painted as such negative and harmful people because of their suspected connected “different” identity that I was taught not to be around them, taught to have anything to do with them. All in all, the conversation was negative. And I took it personally.

As the story continues, I didn’t. I devalued myself and for the next sixteen years, I hated myself. I punished myself for who I was. There were many times when I didn’t want to live anymore because I couldn’t stand the body, the mind, and the human I was in. I was too afraid to live, but I was too afraid to die.

So I knew something had to change. For me to live and for me to survive, something had to change. With God on my side, I knew I had to come out. It was finally the right time and so, I began the coming out process, first starting to break the news slowly with my mom and my dad, a process that took a year and a half. My sister was told along the way. Once my family knew and their support began to grow, I began to grow within myself, finding my own strength and grasping hold of it. The coming out process for me then proceeded exponentially and in just a matter of months, I made known who I was to the world and now every single person knows exactly who it is that I am. It’s the greatest feeling of all, to be your true, complete, honest self.

Rather than take you through the pains of my self struggles, I want to show you how coming out changed my life, in the absolute best way possible. You might hear this quite a bit, that coming out is one of the most difficult and challenging experiences someone can put themselves through, and yes, that might be true, but is it worth living yourself as a lie rather than pushing and enduring through the struggles on the path to becoming who you truly are and living as that person?

I am a firm believer that everything happens for a reason. Yes, there is shit we are all going to go through, but I believe there is a purpose for it all, a purpose to help us grow as individuals and find something about ourselves that we did not know before. Through the pain, we are able to discover and uncover our true strength, becoming soldiers for love and for freedom.

Such as with the coming out experience.

I am not going to lie to you and say it is easy; it’s hard. At times, it can be very difficult. Sometimes I have flashbacks of the deep pain and endless tears I brought to my mother. Sometimes I remember the hateful words I was called and the degrading language that was sent my way for years. Sometimes I can still feel the physical and mental abuse that traumatized me. Sometimes I still hear the stranger telling me to kill myself and the voices in my own head that were telling me to go ahead and grab the knife.

No, it wasn’t easy and I pray that no one has to experience these things. But my story is not uncommon and is nowhere near some of the more painful experiences that members of the LGBT community have suffered because of their fight to be themselves.

Even reflecting back on some of my experiences, would I change any of them? No. Not in the least bit. In fact, I am so overwhelmingly grateful for each and every shitty moment that I had to endure and suffer through. I would not change any of those experiences because they have laid the foundation for the person and the gay man that I am today, and dammit, I fucking love that person.

Coming out has been one of the greatest blessings to me in my life. In fact, I often think and realize that being a gay man is one of the greatest gifts I have ever been given. I mean, how beautiful is it, the opportunity to love another man? It’s amazing. Being able to love someone who knows the struggles I go through and who I know the struggles they go through themselves is such a romantic passion within itself, and then seeing two men fall in love with one another, full-hearted, over-the-top love? It’s breathtaking.

The saddest part, however, is that we as a society have tried to prevent this from ever happening. We have labeled this love as immoral, inhumane, and irresponsible, even rendering it illegal in places throughout the world.

And when you do stop for a moment to think about it, it can be thought of as a little unconventional that members of the LGBT community, in today’s society at least, tend to announce some of their most inner feelings to the world. But we often feel like we have to do it because our survival depends on it. Our lives depend on it. At least for me, this was the reason.

Every member of the LGBT community has their own unique personal experiences that differ from anyone else’s, but for me, I had to come out in order to survive. I had to come out to live, because if I didn’t, my only other solution was death.

Once you come out, will you be the same person that you were before you came out? Absolutely not.

I came out when I knew the time was right. If you are struggling with when to come out or with coming out in general, this is one thing I want to stress to you: Know when the time is right. And how do you know? You just will. That’s not the best answer, but it’s sincerely true. You will find that all of a sudden, the stars within your heart and the feelings within your soul are so aligned and they will be telling you, “Yes, this is it.”

And perhaps the greatest thing about coming out? For me, I knew I was a different person after and why? Because I was happy.

Once I came out, I experienced something I had never truly felt before: True, genuine happiness. I was happy with the man that I was. I was happy with my thoughts, my feelings, my desires, my attractions, my thirst and thrill for life, my dreams and my goals, my passions and my pursuits, my emotions and my intelligence; I was happy for it all.

The smile I wore upon my face was one that was, for the first time in my life, honest. My friends and my family and all those around me knew that something was different because I was walking with grace, no longer buried and pushed down by the emotional weight that was consuming my heart and tearing it to pieces because of the secret I forced myself to keep inside. I was free and I was released, and therefore, I was happy.

Coming out made me realize who I was. It was the catalyst to my growth, to the discovering of the man I am and the self-embracing of that human, leading me to becoming the human I am today.

Since coming out, I have grown more than I could have ever thought to be possible. I am blessed with a world of opportunities and I am now working harder than ever before, and I love it, because my mind is no longer consumed by the fear of what the world around me was thinking of me. I no longer care of how others view me; all that matters is how I view myself and what I am able to contribute to society in a positive manner to make the world a better place and to help someone, like you, along the way.