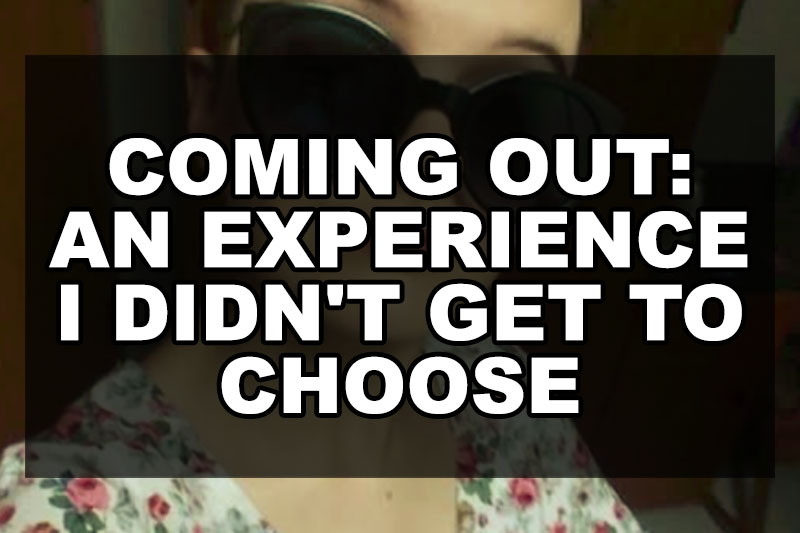 Editor’s Note: The following submission is from Connor. Have an LGBTQ+ related experience or story to share? Having your article published on this site will automatically enrol you into a raffle to win a $50 Amazon Gift Card. Submit an article today via queerdeermedia.com.

For the past four years of my life I have known that I wasn’t straight, and it was only until two years ago that I figured out that “not straight” was simply “lesbian.” Now I knew that when I came out to my family it wouldn’t be bad – my dad’s brother is gay and my mom’s best friend is a lesbian. They already support the LGBT+ community so I was safe. The thing that kept me from coming out any time soon was advice given to me years before: Before coming out to anyone else, you must come out to yourself fully. That way, no one can make you feel bad about who you are.

I took that advice to heart, so I waited until I felt the time was right. During this time (this was freshman year, mind you) I met a nice girl and after a couple of months she asked me out. Now being young and naïve I said yes, not realizing the trouble this girl will later cause me.

For the first couple of weeks it was great. We hung out, held hands, cuddled and was overall a cute couple. However this turned on me quickly. Her band concert was coming up (she convinced the band teacher to do a star wars medley because I have a minor obsession with star wars) and I wanted to be extra, so I bought her a small bouquet of flowers that were her favourite colour.

Now, it’s important to note her mother is extremely homophobic. To be inconspicuous, I bought my best friend a pink bouquet so it looked like I was just being friendly. This didn’t go to plan though. Her mom kept pestering her about the flowers and my then-girlfriend completely caved in. I can’t really blame her too much, her mom is extremely persistent, but she knew what her mom was capable of.

This resulted in her mother driving to my house at almost 10:30 PM, interrupting my family dinner to confront my parents that I was dating her daughter. I was horrified. My ex was standing behind her mother with tears streaming down her face as she silently mouthed apologies to me. Frankly, I felt really bad for her. I mean she was completely embarrassed by her mom’s reactions.

We had to sit down at the table for almost half an hour as her mom acted all concerned about how we were “too young to understand” and how it was “better if we separated the two for a while.” Well, her version of separating means no contact whatsoever as long as she has any say in it. I mean, my ex was literally switched out of my class with only a month of school left. This was absolutely insane.

Come to find out a couple months later that my ex wasn’t a nice person. She spread rumors about me and my best friend so I just cut out her and her family from my life completely. It was for the best. I cried myself to sleep that night because I was so sad that the right of coming out was taken away from me. I wasn’t ready. I told my therapist just earlier that day that I was getting more comfortable with myself, I could probably even come out later that month at this rate. They took that right away from me.

Bottom line, my coming out wasn’t the prettiest thing ever. In the end my parents comforted me and were really nice about it. To be honest, my ex kind of did me a favor. It worked out in the end and it helped me see that the person I really liked wasn’t a good person at all. But the experience at the time was horrible.

Never, EVER take that right away from someone. You have no idea if that person is ready. I certainly wasn’t.