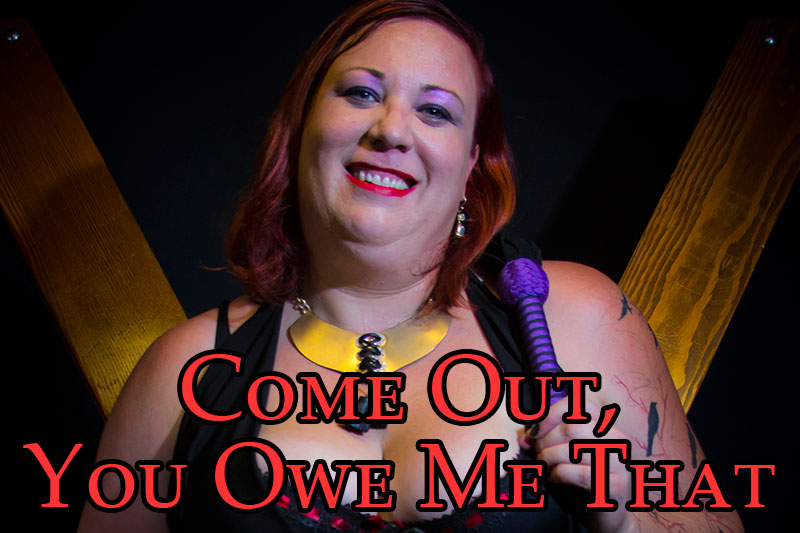 Editor’s Note: The following submission is from Rebecca E. Blanton (aka Auntie Vice). Have an LGBTQ+ related experience or story to share? Having your article published on this site will automatically enrol you into a raffle to win a $50 Amazon Gift Card. Submit an article today via queerdeermedia.com.

[amazon_link asins=’B071KK9VMV’ template=’ProductAdRight’ store=’ourqueerstories-20′ marketplace=’US’ link_id=’9062e2fc-8cad-11e7-b077-d3cbd5ef2d20′]The Life and Times of Harvey Milk, the documentary not the feature film, changed my life at eleven. I watched it on PBS with my folks one night. I hadn’t come out as queer. I didn’t even realize I was queer. I had not really even entered puberty. But I watched the film and it made a permanent impact on the way I see the world.
Long before he was assassinated, Milk said, “If a bullet should enter my brain, let it blow off all the closet doors.” That phrase became my mantra. I understood the amazing gift it is, the amazing community service you do, when you come out and live authentically.

I came out in 1989 at 14. This makes me a gay elder since anyone over 40 seems to be seen as Gandolf the Grey in this community. I came out when I was the only kid on campus, before there were “Gay Straight Alliances” as clubs in high school, when the gay community was still reeling from the first wave of AIDS deaths. I came out because I didn’t realize this was somehow shocking or “brave.” I have a great capacity to just not care about what others find “odd” or “shocking.”
What I found was, that being out, being open meant that anyone with a “secret” wanted to share it. By the time I was a senior in high school, I knew most of the gay kids on my campus, on other campuses in the district, and well, pretty much most of San Jose, CA. I felt bad about reifying the stereotype that we somehow all know each other. When straight folks found out I was gay, I got the question, “So, do you know….” And yes, most likely I did know whoever they were talking about. I wanted to lie just so heterosexuals wouldn’t believe all queers knew each other.

Last year I released a book about kink and BDSM. I did a small book tour. What I found was, at any vanilla venue, when I was signing books, people wanted to lean over and tell me their “secret.” I consider this an honor. People feel safe sharing something important to them that they feel they need to keep secret from others. I often joke I am good knowing about your sexy secrets, but if you ran over a homeless person last summer, don’t tell me. I have seen horror films and I wear matching bra and panties, so by horror logic, I will die if you tell me what you did last summer.

What I know is that by being open about who you are, by living out and honestly, you allow other to do the same. For the first 20 years I was out as queer, there was a huge discussion about the lack of representation of what “gay” was. In the media, in public forums, “gay” was flamboyant feminine men and “butch-ish” lesbians. We were all apparently childless. Men loved to drink and have sex. Lesbians never had sex and were always angry.

We didn’t have broad representation because those who could pass were passing. Coming out can be dangerous. There is a risk to your relationships, to your job, to custody, your home and your safety. But you need to come out. You owe it to your community.

Decades before I came out, other women and men came out. They risked much more than I ever will to live open and honestly. They fought battles I will never have to fight because they were willing to live out loud and proud. They made my life better and they never knew me.
I came out almost 30 years ago. I have never been in the closet. I have always been honest about who I love. I did that to honor those would came out before me and make the world better for people who will come after me.

About two years ago, a friend sent me a video of this 12 year old kid. He did a full drag routine at his school’s talent show. He wore gold platform boots, a lime green leotard and did the splits at the end. His screen on stage read “Drag Villanz!” At the end of his routine, the other kids went wild with applause.
I came out 30 years ago so this kid could do drag in school and get applause. Watching that video, of some 12 year old doing drag at school, made every threat, every derogatory comment, every firing, and every shitty thing I have been through worth coming out. Things are better now than they were three decades ago. Come out so they will be better 30 years from now. You owe us that.