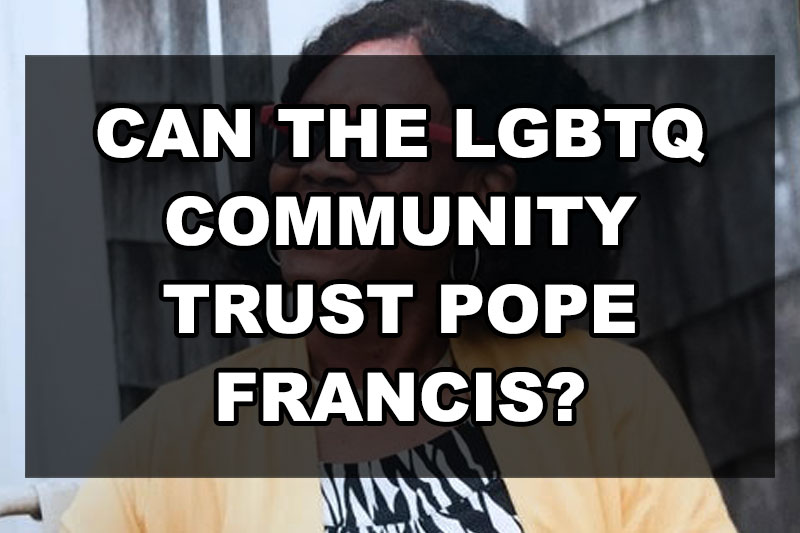 Editor’s Note: The following submission is from Rev. Irene Monroe. Have an LGBTQ+ related experience or story to share? Having your article published on this site will automatically enrol you into a raffle to win a $50 Amazon Gift Card. Submit an article today via queerdeermedia.com.

Once again Pope Francis is rocking the world.

According to reports from Spain’s “El Pais” newspaper and the Associated Press Pope Francis said the abovementioned statement in a private conversation with Juan Carlos Cruz, who is gay and one of the Chilean sexual abuse survivors by a Catholic priest.

“The Pope saying that God created an individual as gay goes far beyond a statement of welcome,” said Marianne Duddy-Burke, DignityUSA’s Executive Director. “It sets a new foundation for Catholic teaching about sexual orientation that is very different than what has been traditionally stated. If God creates us with our sexual orientation or gender identity as part of who we are, the doctrine that LGBTQI people are not part of God’s plan for humanity cannot stand. We can no longer be considered ‘objectively disordered,’ and the entire theology of human identity and relationships will need to be reconsidered.”

The pope’s pastoral moment with Cruz, however, is fraught with not only the long history of the Catholic Church sex abuse scandal, but, also of the ecclesiastical higher-ups turning a blind eye to it- and in some cases flatly denying the allegations of its paedophile priests. Pope Francis being one of them.

For example, Pope Francis ignited anger in Chile after accusing Father Fernando Karadima victims of slander, and there was no cover-up by Bishop Juan Barros.

“There is not one single piece of proof against him (Bishop Barros). It is all slander. Is that clear?” the Pope said.

What happened to compassionate listening and an open heart?

In 2011 the Vatican, however, found Karadima guilty of abusing teenage boys and was sentenced to a lifetime of “penance and prayer.”

In depicting the abuse and cover-up, Juan Carlos Cruz tweeted the following:

“As if I could have taken a selfie or photo while Karadima abused me and others with Juan Barros standing next to him watching everything.”

I am elated that Cruz had a private moment with the pontiff. It allowed Francis to provide the needed pastoral care to Cruz as a sex abuse survivor. Also, it allowed Francis to make amends for his callous acts toward Cruz and others as a conciliatory gesture for his and the church’s sin.

However, I don’t interpret Francis’s pastoral moment with Cruz as having dogma-transforming ramifications, because he has flipped- flopped on us too many times, as he has with the church abuse scandal.

For example, in the pontiff’s 2015 tome, “Pope Francis: This Economy Kills.” Francis compares transgender people to nuclear weapons. His reason is that this unlikely pair both destroy and desecrate God’s holy and ordained order of creation.

In an interview with the National Catholic Reporter Francis spewed the following transphobic remarks:

“Let’s think of the nuclear arms, of the possibility to annihilate in a few instants a very high number of human beings,” he continues. “Let’s think also of genetic manipulation, of the manipulation of life, or of the gender theory, that does not recognize the order of creation.”

Francis clear denunciation of our present day gender theories and understanding of the fluidity of human sexuality not only perpetuates spiritual harm and alienation to our trans community but it also unwittingly invites physical warm to our trans community—done in the name of God with righteous wrath and indignation.

“God has placed man and woman and the summit of creation and has entrusted them with the earth. The design of the Creator is written in nature.”

In 2000 The Catholic Congregation for the Doctrine of the Faith also denounced the existence of transgender people.

“The key point is that the transsexual surgical operation is so superficial and external that it does not change the personality. If the person was a male, he remains male. If she was female, she remains female.”

Sadly Francis’s views on women’s role within the Catholic Church hierarchy are both retro and spiritually abusive, too.

Pope Francis continues to command attention around the world with his liberal-leaning pronouncements, but the pontiff is a complicated, if not confusing figure to LGBTQAI people. On the surface, Francis displays a pastoral countenance to his papacy that extends to all of our community, but

I recall remarks Pope Francis made while flying home after a weeklong visit to Brazil in 2013, responding to a question about a possible “gay lobby” in the Vatican. His answer set off global shock waves.

“When I meet a gay person, I have to distinguish between their being gay and being part of a lobby,” he said. “If they accept the Lord and have good will, who am I to judge them?”

This public statement is the most LGBTQ affirmative remarks the world has ever heard from the Catholic Church that in 2013 “The Advocate,” a nationally renowned and respected ‘zine, named Pope Francis their “Person of the Year.”

But, Pope Francis is the consummate flip-flopper of our time. He doublespeaks on issues- first he defends the abusive priest and now the survivor. He embraces the LGBTQAI community and then he doesn’t. His pastoral demeanor cloaks the iron -fisted church bureaucratic that he is.

It’s not enough for Francis to say he embraces our community- privately or publicly. He must also do it.