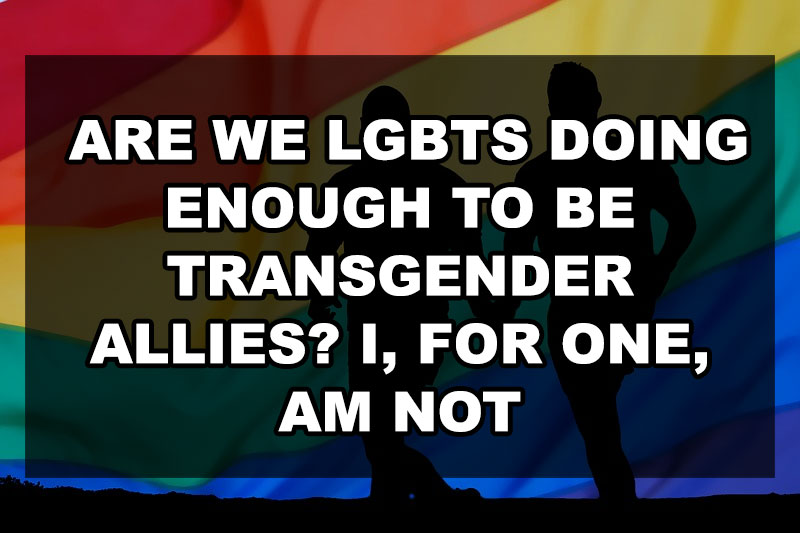 Editor’s Note: The following submission is from Vinodh Pillai. Have an LGBTQ+ related experience or story to share? Having your article published on this site will automatically enrol you into a raffle to win a $50 Amazon Gift Card. Submit an article today via queerdeermedia.com.

I recently befriended a quirky transgender high school student named Bee. He’s a 17-year-old high schooler from a rural town up north, and just as insane as I am.

Bee came across my Facebook profile through mutual friends. After I accepted his friend request, we soon got the ball rolling when we found out we had many mutual interests.

For example, like me, he too enjoys binge watching political dramas and documentaries like The Crown and Madam Secretary. He also likes reading One Direction fanfiction. And in his spare time, he dabbles in fanfiction writing.

But given Bee’s age, I was concerned for him.

I speak from experience when I say that schooling as a closeted Lesbian, Gay, Bisexual, and Transgender (LGBT) person is especially difficult when you are only bullied for not being “straight”.

Having been bullied for carrying myself stereotypically “gay” throughout my own high schooling, I had hoped that Bee’s schooling experience wasn’t the same as mine.

I was glad to know, after we chatted over the Internet for some time, that Bee had not encountered bullying of any sort ever since he started to be more conscious about his gender and identity.

Sometimes I noticed that Bee would take a few hours to reply me, when just a few seconds prior he was online, and ever so chatty.

I didn’t take this seriously at first; after all, I myself constantly leave people “on read” and selfishly go to sleep at night, not bothering to let my friends know I was tired, and only reply the next day.

I guess that’s why I didn’t see it coming when Bee said he was self-harming.

I was having my breakfast one morning as Bee’s message came in all of a sudden. He apologised for not responding to me the night before, and confessed that he had spent his evening slitting his wrists with razor blades.

As I would later gather, this wouldn’t be the first and last time Bee would make such confessions to me.

At first, the delays in replying were rare. After confessing to me that he was cutting his wrists or trying to take his life, the delays were more frequent.

See, while Bee wasn’t bullied in any way for being trans, he was choosing to cut and harm himself, because deep inside, he could not accept that he was not a girl, but a man.

Worse still was having to don the Muslim hijab, and cover himself from head to toe – something, he maintains, is still a challenge, given he does not consider himself religious either.

From a very early age, Bee realised that he was growing up differently than his friends.

He told me that he began keeping a buzz cut hairstyle when he was 7, cutting down his long hair, much to his mother’s chagrin.

But despite his consistent refusals to wear dresses or skirts at home, Bee is forced to wear the traditional baju kurung attire at school, and at family functions, weddings, and public programs at his village community hall.

Bee began cutting himself when he started going to high school and couldn’t take it anymore.

In his own words, suicide became inevitable when he could no longer stand being in a body that just wasn’t suited for him.

Although he had LGBT friends, not many understood and recognised that a transgender person could simply just come out to everybody as trans, and hope that everything goes okay.

For one, Bee wasn’t “out” to his family, so corrective surgery or starting hormone therapy wasn’t an option for him. He would simply have to dress up like a girl, and do as he was told, else risk being kicked out of his house.

I made the difficult decision to stop speaking with him once I realised my efforts at helping him stop self-harming were not effective.

Selfish as it sounds, I reasoned that if he couldn’t appreciate my wanting to help him stop, I couldn’t stay and simply allow for him to carry on self-harming.

It was eating me up inside knowing that someone was hurting, and there was nothing I could do to help.

I did offer sharing with him contacts of mine I thought would be useful for him. These were numbers of LGBT activist friends of mine and support groups of mine and I assumed this would be enough.

But Bee seemed disinterested in reaching out to more qualified and able people to help him. For him, having to relay his issues and concerns was bothersome.

Besides, he already had me to talk to, so there was just no need.

This episode with Bee, and how I ended things with him, primarily, has affected me greatly. When I think back to my wanting to cut ties with him, I tell myself that it was for both his good and mine.

For me, I wouldn’t feel so bad anymore for not being able to do anything to help, and for him, perhaps, he would eventually benefit from befriending a more capable and aware LGBT ally.

But I told myself that I couldn’t fill in these shoes. I simply couldn’t.

I shudder to think, however, that I wouldn’t have acted so coldly if it came to helping gay, lesbian, or bisexual friends of mine.

I wouldn’t have isolated myself from them if I didn’t know how to help them. And I highly doubt I would have just shared contacts with them and tell them to “save yourself”.

While I identify as LGBT and consider myself an ally to my fellow LGBT family members, with Bee, I didn’t know what to do.

Of course, I knew what to say to help him with his suicidal tendencies. I tried to make him feel welcome as a fellow LGBT member, and offered companionship. But I didn’t know how I could actually help him.

But was that any reason for me to leave him dry and high?

Perhaps my ignorance and rationalising stems from ignorance. After all, I didn’t grow up with transgender friends or family, and only until recently, began regularly meeting and speaking to transgender people.

I can do more to be a more understanding ally for people like Bee. I really must. It isn’t fair of me to selfishly abandon a friend, just because I felt bad that I wasn’t able to help.

I’m going to write to Bee after this. I just hope it isn’t too late for me, and him.

Oh, I really hope it isn’t too late for him.