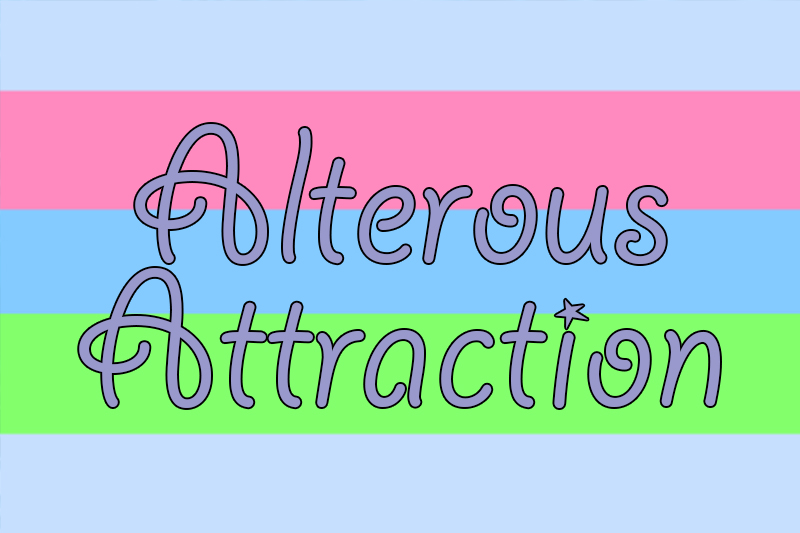 Editor’s Note: The following submission is from Amy Maria Flannigan. Have an LGBTQ+ related experience or story to share? Having your article published on this site will automatically enrol you into a raffle to win a $50 Amazon Gift Card. Submit an article today via queerdeermedia.com.

[amazon_link asins=’B01J90BOCO’ template=’ProductAdRight’ store=’ourqueerstories-20′ marketplace=’US’ link_id=’99261102-8cd9-11e7-b693-6b2fabf2dfce’]I have described all the types of romantic orientations and we will take a look at one of them that’s fairly personal to me, the alterous attraction. Yes, it is my orientation, and I will do my best to describe what it feels like to be alterous. If anyone of you wish to know more about any other orientation you can always write to me, but it won’t be in the form of a first hand experience like it will be here.

Anyway, let’s dive into it. So from my post on romantic orientations you know that this is the definition of alterous:

Someone can be both alterous & romantic &/or platonic & can experience varying degrees of attraction, and ultimately feel discomfort / unease / or just a sense of inaccuracy in calling it wholly romantic or platonic.

It’s part of the aromantic spectrum.

Actually, I have heard some alterous aces say that it could actually be taken as a seventh type of attraction (see [below the different] … Types of attraction), with which I could almost agree, were it not so similar to emotional attraction. And also we get enough criticism for all our terminology already. I don’t see a need to add it to the list and making things worse.

So what is my experience with it and what is my alterous orientation? I consider myself Poly-alterous, since there are multiple genders I can like. But the truth is I am also considering the possibility of me being demi or grey. Grey because it happens to me on a fairly rare basis. In my 24 years of life I fell in love once. And demi because I do have to know that someone. Like it did my first time, when I felt a strong connection very early on in the relationship. And that connection only got stronger with time. Never before did I feel so at ease with someone and could talk so easily with them.

Honestly, it can be rather confusing. Just how many times have I asked myself what is it I really want? And am I perhaps aromantic? The thing is it may fluctuate and go more to the aromantic side. That may be the reason why it is so damn confusing, not to mention that I’m not very good at identifying my own feelings.

At any rate, I can fall in love and I did once. And in retrospect I see that the emotional closeness was the most important to me. As for the physical part, well, it doesn’t exactly help that I may actually be asensual. I am not particularly fond of people touching me, but all in all I get almost nothing out of it. But for a special someone I would do the sensual stuff and sometimes want it too. But only with a very special someone. Though, it’s not necessarily that important to me. The deep emotional bond and dependency is.

Now, it is not like a friendship. You don’t need such a strong bond in a friendship, not even between best friends. Nor do I get those feelings of frienship. The thing is I am slightly limited in that department, as well as others. Even if I try I don’t feel any such bond. I can like people and stick with them, but I still don’t feel it. It’s just something I can’t do.

Now, other people can and do feel these feelings, but it’s still not the same. Just to rule out the argument that it’s just with people like me.

So yes, the emotional bond is the most important to me. A deep bond. And I would like it to be kind of dependent, which I guess may sound strange from someone like me, but I feel that way. I was like that in the past relationship.

I hope this made sense. I also hope that this is/was enlightening for you ,and that you can better understand what it means to be alterous.

As with all sexuality even asexuality is a spectrum. There are several sexualities that belong on the asexual spectrum and need to be talked about.

But what about the rest of the spectrum? How diverse are the people on it? Well, let me answer the question right away.

The following sexualities are real, valid and belong on the asexual spectrum.

Demisexuality – a sexual orientation where one can feel sexual attraction, but only after a strong bond has been established.

Don’t tell demisexuals that that’s what everyone feels, that one does not need a term for the norm. Because it is not the norm. Non-asexual-spectrum people can feel sexual attraction without knowing the person and want to have sex with them.

Greysexuality – a sexual orientation where one feels sexual attraction very rarely, like once in a life time for example.

Greysexuality has a wide meaning. Some also say that the sexual attraction is weaker. But the common meaning is that it is rare.

Fraysexuality – a sexual orientation that is the opposite of demisexual. A fraysexual can feel sexual attraction towards a stranger, or someone they don’t know too well, but the sexual interest fades away the more they get to know the person.

Cupiosexual – a sexual orientation where one does not feel sexual attraction, but still wants a sexual relationship.

Placiosexual – a sexual orientation where one wants to do sexual things on someone else, but does not need them reciprocated (Deals with attraction, no attraction).

Autochorissexual/Aegosexual – a sexual orientation where one is disconnected between oneself and sexual target of arousal.

Apothisexual – a sexual orientation where one identifies as asexual and also sex-repulsed.

All of these belong onto the spectrum are spectrum and of course they are even more invisible than asexuality itself, which slowly started to emerge from the depths and slowly gets more attention and acknowledgment. But they exist and are real.