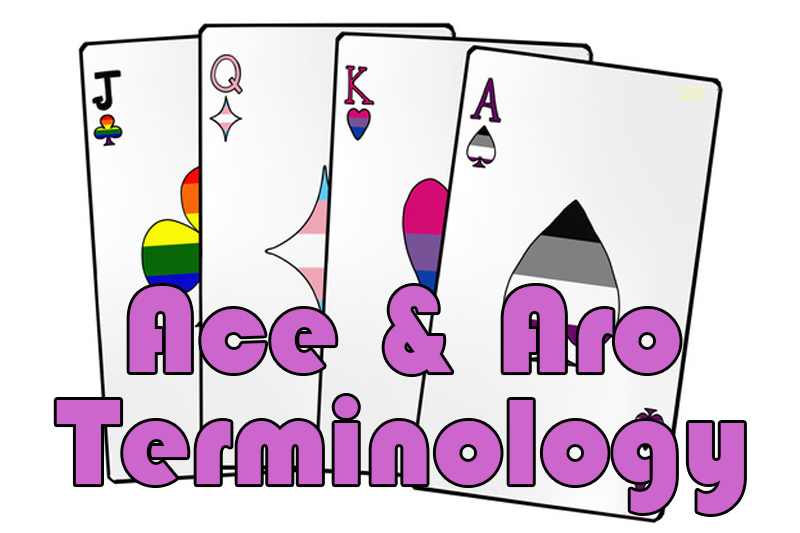 Editor’s Note: The following submission is from Amy Maria Flannigan. Have an LGBTQ+ related experience or story to share? Having your article published on this site will automatically enrol you into a raffle to win a $50 Amazon Gift Card. Submit an article today via queerdeermedia.com.

[amazon_link asins=’B073QR7FCF’ template=’ProductAdRight’ store=’ourqueerstories-20′ marketplace=’US’ link_id=’818813ec-8cd9-11e7-be79-394c6e741348′]There is a lot of criticism towards the asexual community and the aromantic community for all the new terminology both communities put together. Most criticism centers around confusion and questions as to why these terms are a necessity. This article will detail the importance of old, new, and emerging terms within the LGBTQ+ community.

First, let’s answer the most basic of questions revolving around this terms. Why are new terms developed? The thing to remember is that people feel much safer discussing these issues today than they did twenty years ago. The past is not a bright memory for LGBTQ+ people. People were often treated as though they had some disorder that needed to be fixed. This is slowly going away nowadays and people can feel more free about their sexualities and gender expression.
As a result of this new freedom, the wish to find efficient ways to express our identities becomes more and more important. We just wanted to be able to describe ourselves in couple words than having to put an essay together describing how we feel and not have a name for it. Sure, we still may have to explain it, but you wouldn’t believe how better it feels to have a name for it, knowing that you’re not alone, that someone out there feels the same way, that you are not weird or broken.
Just how many people around the word struggle in their identity with society when they don’t know the term for their feelings and that they are not alone and not broken. It would help many people to know one simple term to know they are not alone or broken.
This is exactly why all the terms were added. For people to be able to better describe themselves, to know they are not ‘freaks’, and to be able to show people resources about a certain topic. One simple term unites thousands of people around the world. And aces and aromantics are no exclusion to this.

Now, how do we justify needing these new terminologies and descriptions? Any new community will add some new terminology. It’s true about the homosexual community, it’s true about the ace and aro communities, and it will be true of any other community that will arise. This not only applies to gender and sexuality communities, but any other community there is under the sun.
But still, why our specific terminology? You have to remember what asexuality and aromanticism are about. They are about not feeling sexual and romantic attraction. But being asexual or aromantic doesn’t mean we are born without feelings, that’s a misconception. We have feelings like everyone else and with those comes the full package of confusion, basing opinion off them, crushes, squishes and all that fun stuff. We feel things, we just don’t have one of either of the two attraction, or both, depending. And since our experiences are slightly different we want to be able to name them and describe them.
For example asexuals don’t feel sexual attraction towards any gender, but we still feel love and fall in love and feel attracted towards people on a different level. And we wanted to be able to name it and describe it. Hence came romantic orientation, platonic orientation, aesthetic attraction, and others into existence. We only described our feelings and experiences and gave them a name. And it is helping thousands of people, showing them that they are not wrong.

This should answer your questions about where these terms came from and why we need them. You may still argue that it is confusing. However, no one is forcing you, nor even asking you to learn everything and remember everything. We ask you to be aware of it, respect and acknowledge it’s existence, and to respect us when we decide to use it for our identification.
Don’t argue, however, how pointless it is. It is helping many people. And because you may not make use of it doesn’t mean other won’t either. By rejecting it and labeling it as useless you are actually rejecting millions of people around the world. You should be aware of this.
I have also seen people argue that it seems wrong to use such terminology and others, like the trans terminology, just because it doesn’t seem right to make such differences, that we are all people and refuse to use it. I have actually even heard these terminologies compared to illnesses, and that we don’t need labeling. I’ve seen specifically trans terminology targeted by non-trans, cisgender people; the excuse for disliking the term was that they disliked “cisgender” because they found it “separating.” Might I add, they actually referred to cis people as “normal”, thus implying that trans people are not normal. They also implied something along the lines that as they don’t like their illness we should feel set apart by our identities. Firstly, how does it make sense to compare an illness to an identity? I can understand how someone may not like an illness, but an identity is something different. And secondly, “normal?” Who is to say what is and isn’t normal? It is a very invalidating word, when used in such context. And they wanted to write articles about the trans community.
Well, firstly, it doesn’t matter what community it is – trans, ace, nerd, geek, punk, goth – we all have terminologies. Terminologies we ourselves made, or a part at least. And no one who knows something about it will ever take such article seriously. Secondly, people do like their identities. I have nothing against being trans and ace. And thirdly, those terminologies are used for describing a group that has differences from other groups. Like aces have differences from allos, and vice versa. And punks have differences from nerds. Terminology like trans, ace, cis, allo, aro and others aren’t used and made up as slurs, but describing a group of people that has differences from other groups.
I am a trans and I’m okay with it and say proudly I’m a trans woman. I’m also a nerd and I like it too. And I use all the terminology to describe a group of people, like now.
It’s just necessary for some people.

Terminology isn’t made just for fun, nor as a slur, or anything similar. It actually helps many people and more come to find themselves thanks to this. And I hope you understand why it was made and why more is being created, as well as that we don’t expect you to know it all by heart. All we ask is for you to respect that it exists and respect us if we chose to use it for our identity.
Dictionary
Ace(s) – people who identify as asexual.
Trans – short for transgender.
Aro(s) – short for aromantic. People who identify as aromantic.
Allo – short for allosexual. Allosexual – a term for people who experience sexual attraction in general.
Cis – short for cisgender. Cisgender – a term for people whose gender identity matches their biological sex.
Squish – is an intense feeling of attraction, liking, appreciation, admiration for a person you urgently want to get to know better and become close with, but not on a romantic/sexual level. More like on friendship level.