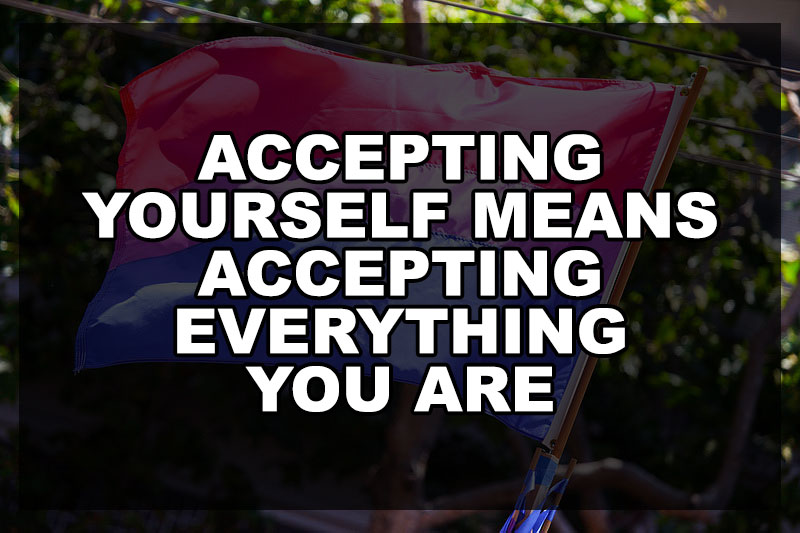 Editor’s Note: The following submission is from Blake. Have an LGBTQ+ related experience or story to share? Having your article published on this site will automatically enrol you into a raffle to win a $50 Amazon Gift Card. Submit an article today via queerdeermedia.com.

Everywhere we go, it is not difficult to hear and read messages about the importance of loving yourself. We turn on our Instagram and right beside a cute photo, we see something like: “you can’t love others if you can’t love yourself first” and many others similar quotes.

When you’re someone different from the majority, it becomes a little trickier than that: to accept and love all the aspects of what makes you, you.

That happened to me, and it is still happening.

I’ve never had problems with my sexuality until my adolescence. Even though I grew up in a religious environment here in Brazil, I was happy going to church every Sunday, praising God whenever I could, reading the Bible and praying before going to sleep. I even remember having a few “crushes” at school. No one could say that I was different.

Like most teenagers, I got introduced to the “marvelous” world of pornography. I was pretty scared when I found out. All those videos of people having sex, and I didn’t have my own computer at that time, so I had to be extra careful.

Sex was always a taboo; don’t talk about sex, don’t even mention it. So to be exposed to that world almost out of the blue was… terrifying, and also a journey.

When I entered this world full of boundless novelties, I was fascinated not by the women and their bodies, but the men. I was confused since I couldn’t understand why the masculine figure drew so much attention to me. Knowing it was impossible to talk to my mother or any other human being close to me about it; I decided to use the internet. I came into contact with the words gay and homosexual.

Trust me, I was pretty naïve. The 11-year-old me could never believe that someone could be attracted to the same sex. But that idea of mine broke into a thousand pieces when I saw the pictures.

I still recall how I felt.

Imagine a confused kid seeing thousands and thousands of images showing naked men doing things he only thought possible between a man and a woman. It sounds stupid to think about that kind of thing, but for a kid, it was more than wild.

The years passed, and I discovered more and more things; some of them were not good. I discovered about homophobia, and that homosexuals were considered evil, sinful, and broken.

“It’s not natural!” My mother told me once when I, pretending it was just curiosity, asked her what she thought about them.
I started to believe I was one of them; that I was broken; and that did not help at all with my self-worth. For many years, all through high school, I thought I wouldn’t be able to find love because who would want to be with someone broken?

I was religious as well, and I prayed so many times for God to do whatever he wanted with me, as long as I stopped feeling attraction toward men. Why couldn’t I go back having an attraction exclusively to girls just like a few years ago? Why did I start liking men?

Despite all that, there was a slight attraction to girls. Sometimes I would fantasize about them as well. So what was going on?
I grew up Catholic, but when I was in high school, I decided to go to an evangelical church after being invited by my friend.

I have to say that I liked it. I felt welcomed and at peace, something I didn’t feel when I was at the Catholic Church. One day, I decided to confess to the pastor about my same-sex attraction.

He was totally understanding and welcoming and said he would pray for me. He was so generous that he even recommended a Christian psychologist to help understand what was going on.

That night, during my confession, he said that we live in a broken world, dominated by sin and that we can’t do anything to please God because we’re sinful. I accepted that idea, but deep in my mind, I realized a new seed growing.

Since I couldn’t afford a psychologist without my mom knowing, I brushed it off and decided to deal with it by myself. I eventually abandoned the church for this and many other reasons.

During high school, I lied a lot. I lied and told everyone, including my family, that I was asexual; that my lack of girlfriends and sexual experiences were due to my absence of attraction toward any sex. I lied well since they all believed it. But I was still satisfying my fantasies through the internet and feeling like a piece of trash afterward, begging for God to make me straight, and then repeating the same cycle.

“Why haven’t you dated anyone so far? Everyone here’s had sex or dated more than once. Only you still act as a priest.” Some would say.

“I’m asexual. I don’t feel attraction toward nobody.” That would be my answer, but in my mind, I was saying: “Nobody could love me. Nobody could ever have sex with me. I’m a useless mess.” You might think that is pretty evil to call someone useless and incapable of love, but imagine saying that to yourself every single day, every single moment.

After trial and error, and sleepless nights, I decided to go on an internal trip to full acceptance. I realized I couldn’t win this war because there was no war. I realized, also, that the demons inside my head telling me I was unworthy and broken were demons society planted in my mind. They were not real. I was not unworthy, nor broken, nor sinful. And I also became agnostic.

I was me: an imperfect human being trying his best to live life by his own terms.

I wish it was that easy.

There were many nights where I would cry to sleep. There were nights I wished I could close my eyes and never open them again. But I decided to keep going. Self-acceptance was my goal. I just raised the middle-finger to any idea harmful to me.

I’m still here, a lot stronger than before. I came to terms with my own demons and, when I did that, they became weaker and weaker.
I don’t feel good with labels, but if people knew me now, they would say I’m bisexual. I like men, I like women, and those in between, although not to the same extent. I learned to appreciate that and embrace it, even though I don’t let that define me.

But now I don’t think I’m less than a human or incapable of love, I just love differently than most people, and that doesn’t make me better or worse than anyone else.

Why I wrote down all that? To show that loving yourself is not just exalting your qualities, pretending you are pure perfection while ignoring your faults. There are no perfect people, and you don’t have to be one.

It might be hard to grasp, I know, but how will you be able to be happy if you don’t accept the idea that everyone in this world, no matter how perfect they appear to be, have flaws, and that your sexuality is not an indicator of a bad or good person?

You are not broken and are not unworthy of love, period.