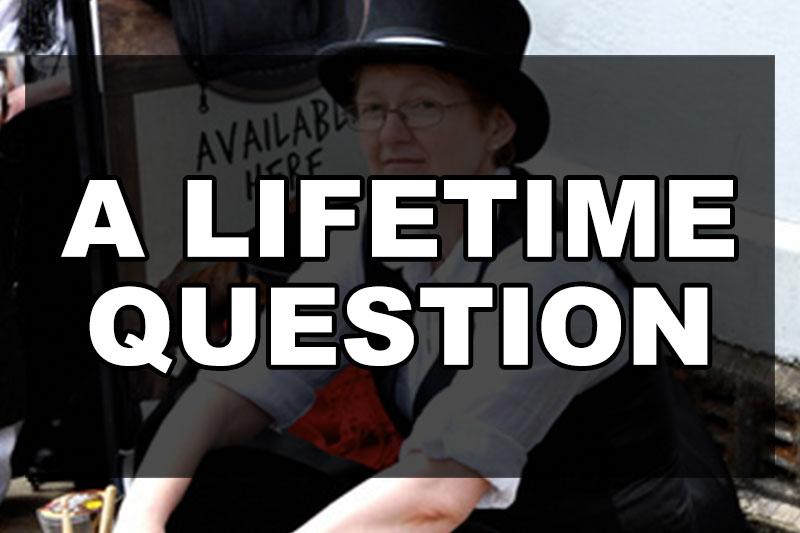 Editor’s Note: The following submission is from Marnie Goodbody. Have an LGBTQ+ related experience or story to share? Having your article published on this site will automatically enrol you into a raffle to win a $50 Amazon Gift Card. Submit an article today via queerdeermedia.com.

[amazon_link asins=’B072JJHM4J’ template=’ProductAdRight’ store=’ourqueerstories-20′ marketplace=’US’ link_id=’01b0655d-8c96-11e7-b959-010f999c96d0′]It wasn’t until I was in my early fifties that I finally worked out that I was agender and asexual. Figuring out that I was asexual was the easier part of the equation. That really only required coming across knowledge of the orientation. But it still took me 45 years to get to that point, because it took me 45 years before I heard of asexuality.

How did I know I was ace? Well… At school I had no interest whatsoever in dating. My time was amply occupied with Star Wars and science fiction, and it honestly never occurred to me that I might want a boyfriend (or a girlfriend). (On further reflection there may be a degree of gray-aromanticism in my mix too.) I wasn’t physically attracted to anyone, and I didn’t want anyone to be physically attracted to me. I remember once getting a secret valentine card and being horribly upset because that was not something I wanted to be dealing with at all. Ugh!

Pretty much the same thing went on at university – my life was full of interesting things. I was having fun, making friends, learning new things, playing D&D. I felt no need to add a relationship to that mix, and there was no pull towards anyone to make me feel it. By this time, however, I had begun to realize that I was unusual in this.

Everyone was talking about sex. Everyone – including doctors – were assuming that I was interested in or actively having sex. That seemed very offputting and mildly disgusting to me. Every time some evidence came up that society expected mixed groups of men and women to be having sex, I would be baffled. But why? I would ask. Why do they assume that sex is going to happen? And then everyone would laugh as though I was joking, or at the very least being some kind of adorable innocent from planet alien. I never really got an explanation except for a shrug and a “because it is.”

I spent a lot of time being vaguely repulsed by society and media and jokes and all the nudge-nudge-wink-wink apparatus of sexuality that simultaneously tries to tell you that it’s ubiquitous but you must be ashamed of it anyway. I felt as though I was made wrong in some way, so that my mind just didn’t grasp this concept and why it was so damn important to people. Surely they were exaggerating? Making it up? Celibacy? – I didn’t see what the big deal was, it sounded easy. Cheating, pre-marital sex, sleeping around? – I didn’t see why on earth you would. What would anyone get out of those things anyway?

Despite all this, I fell in love and got married, still assuming that I was some kind of strange straight person. Marriage was idyllic, except for the sex life – I had gone from ‘naturally virtuous’ to ‘frigid’ overnight. I didn’t see why he was so damn insatiable. He didn’t see why I wasn’t attracted to him when I kept telling him I loved him. It was the one thing we couldn’t ever seem to compromise on or fix. I thought it was my fault for being unnaturally disinterested in something I had been told all my life was a universal human drive. If I could have taken Flibanserin then, I absolutely would have done, not realizing that I was attempting to medicate myself out of my orientation.

From very early days, I had felt a draw towards the LGBT community, not knowing exactly why, except that it felt more like home than mainstream society did. So it was in the queer community on Tumblr that I first came across the idea of Asexuality. I wasn’t sure about it at first – I’d wondered before if I was bisexual, or transgender, and each time on examination the label fitted less and less. But asexuality got more and more plausible – explained more and more things – the longer I thought about it.

Eventually I was sure enough about it to tell my husband I was asexual. After an initial shock, it came as a relief to him too to learn that it wasn’t his fault that I was as disinterested in sex as I was – it wasn’t that I didn’t like him – I didn’t like anyone in that way.

So the asexual part of it was relatively easy. I’m sure I would have known I was asexual earlier if its existence had been made known to me earlier.

Being agender was different.

I was your typical tomboy. I didn’t want to be a girl. I wasn’t interested in girl things. And that was considered almost praiseworthy for pre-pubescent children in the 1960s, so everything was fine until I hit puberty. At that point I developed a mild case of dysphoria for my body – I didn’t want my breasts. I wished I could get rid of them, and I put a lot of effort into concealing them. I still thought I wanted to be a boy, but I wasn’t brave enough to say so out loud in the 1970s.

Then I discovered feminism, and I began to unlearn some of my deeply buried internalized misogyny. I was forced to consider that being a woman was not a shameful second class thing. Was my rejection of the idea that I was a girl down to being taught that boy-stuff was the only interesting stuff? I couldn’t be sure.

I found myself identifying with creatures and characters whose gender was indistinct. Sex-changing Loki. Sexless angels. Eunuchs of the ancient world. The genderless people of Ursula LeGuin’s “The Left Hand of Darkness.”

I discovered enough social anthropology and gender theory to realize that things I had thought were laden with gender were actually not gender specific at all. Skirts were just kilts or sarongs in disguise. What was a male job in one society was a female job in another… etc

“Oh!” I thought, gladly. “This means gender doesn’t actually exist. It’s a vile oppression forced upon us by society. We are all just people! Let’s not do gender at all!”

And that’s pretty much where I’ve stayed ever since. I loathe being talked about as though I’m a woman. But I don’t really think I’m a man. I’m a person. For fifty years I’ve gazed into the void of me and tried to work out my gender, and nothing looks back. I still can’t find it.

I thought this was how it was for all people, until my children were born. My first, a cis girl, rejected all my attempts at gender-neutral parenting and insisted that I acknowledge that she was a girl and that was very important to her. My second, a trans boy, was telling me he was a boy from the moment he could speak. It became obvious to me that – for other people – gender was something innate and powerful and obvious.

The fact that it wasn’t any of those things for me became diagnostic in the end. It wasn’t that I felt like a girl sometimes and a boy at other times. It was that I didn’t feel like either of those things at any time. I threw my hands up. I went “Damn it, I don’t know! I don’t think I have one!”

And that’s how I decided I was agender. I went looking for my gender, and I kept not finding anything. Surprise surprise, there’s actually a word for that, and I am very relieved to be able to finally stop, and say “Stuff it, I’m not a man or a woman, I’m just me.” Other people can do gender from now on. I don’t get it at all.