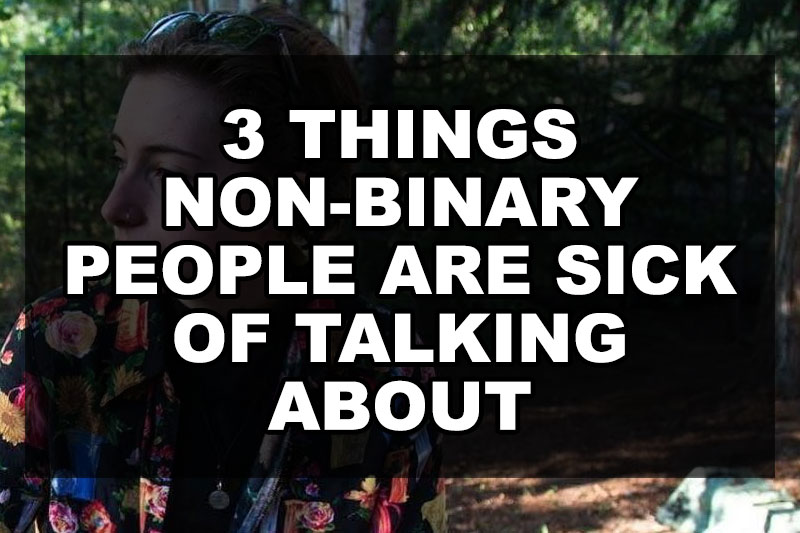 Editor’s Note: The following submission is from M.M.Jessiman. Have an LGBTQ+ related experience or story to share? Having your article published on this site will automatically enrol you into a raffle to win a $50 Amazon Gift Card. Submit an article today via queerdeermedia.com.

I recently came out as nonbinary this year. After 20 years of concealing my need to be my true self, I’m finally able to express my gender or lack thereof freely.

When I first came out, there was a lot of questions. Like, way more questions then when I came out as queer. Questions like “so..are you a trans man then?” Or “do we have to use they? It’s not really proper English.”

So here are six things that I, a nonbinary person is sick of talking about. I’m more than happy to help educate when I can, but there are so many other resources out there that you can look for information on that won’t care if you’re accidentally offensive.

1. Some of us identify as trans, some people don’t.
For me personally, I identify as trans. Trans is an umbrella term that is used as a catch-all for gender non conforming people of all shapes and sizes. In my opinion, trans means that you identify differently than the gender you were assigned at birth.
But this isn’t the case for everyone, and there’s a lot of trans folks in this world that think that nonbinary people shouldn’t identify as trans because they don’t fit into the male or female binary.
I want people to stop asking me if I’m trans. What I identify as is nonbinary. If that isn’t enough for you to respect me as a human being, then me telling you I’m trans isn’t going to make you change your mind.
Trying to fit into the mold that society perpetuates is hard enough. We as gender nonconforming folks shouldn’t have to fight to be respected all the time.

2. Whether or not I’m transitioning medically is none of your business.
There’s a huge number of people who undergo surgery’s such as top surgery, bottom surgery, facial feminization surgery, etc or decide to go on hormones to change their bodies, voices, hair growth etc. But let me make you think for a second.
Your friend has a mole on their face. It’s been there forever, and you know they’re self-conscious of it. Are you going to ask them if they’re having it removed at a party? What’s it to you? It’s not on your face, so why do you care about that mole? That’s exactly what asking people if they’re medically transitioning is like. Firstly, you don’t have to medically transition to be trans, non-binary or gender non conforming. Your identity is YOUR identity. It doesn’t belong to anyone else, and you are the only person who gets to decide what makes you-you.

For me, the entire idea of me identifying as nonbinary is because I don’t fit into a binary. IE: I don’t feel like a boy or a girl. Some people identify as femme nonbinary, trans masc, butch, some people identify as a man or a woman, but also nonbinary! It depends on you alone. For me, it depends on the day. But there will never be a day where I wake up and say “oops! Never mind! I’m a boy/girl after all!.” People are free to identify as they please, and as stated before no one can tell you what is authentically yourself. But when you ask people “so…uh are you a boy or a girl?” Most of the time people will get uncomfortable. Instead, maybe care less about what someone has in their pants, and more about whats going on in their life.

We want to get to a place where our genitals are the least interesting thing about us. We’re not all that different from cisgendered people, we just aren’t restricted by a societally made binary.